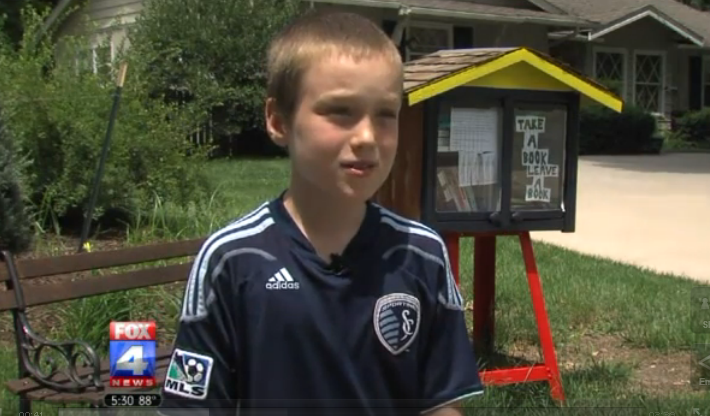 In Leawood, Kansas, 9-year-old Spencer Collins’ attempts to share free books lasted a week before being shut down by city ordinance.Not too much bigger than a mail box, what started as a Mother’s Day gift to also help the neighborhood, is now relegated to the garage as of Wednesday.  Spencer’s vision for his little free library was for people to “get into reading, get to know your neighbors, and just make new, meet new people, make friends.” But the city warned the family with a notice to stop, actually claiming that “the little house” is an accessory structure, buildings that aren’t attached to the house. A building? Would it help if it was shaped like a shoe? Poor Spencer thought he could get around the law by attaching a rope from the house to the box.

It’s an entirely free lending library which Spencer’s father, Brian, describes like so:

Richard Coleman, director of community development (ironic because Spencer said he wanted his library to help the community) said he’s only enforcing a law.

It applies to any structure, so we aren’t targeting the little libraries. You couldn’t put a bookcase out there, or a couch out there, or any items like that.

Mr. Collins said it was a misinterpretation and that “applying [the law] to something that won’t house mice is a bad idea.” This supposedly “long-standing” ordinance has only been around for about 10 years. While people think of structures as buildings, the city is applying it to anything.

That seems to be the problem with vague, wide reaching ordinances – it becomes an absurd overreaction, an overreach into people’s yards. How is shutting down a young person’s attempt to help the town a legitimate path towards community development?This reminds me of when the Helvenstons wanted to grow a community garden, but they were shut down Orlando city which aspired to become “the Greenest City in America.” Or when Karl Tricomo, with his front yard garden, had the city painting his yard into a large industrial farm claiming he needed permission to engage in “agriculture.” In either case, they didn’t break the law – it was a major stretch of ordinance because the yards weren’t uniform – and everything must be uniform now.As in most cases like these, the shut down is said to stem from mysterious anonymous “complaints.” In this case, one wonders… But of course, the complaint that the city so ardently must put right can only have a basis if there is an existing ordinance. Ordinances can be a gray area – they are rules developed by municipalities that can be pretty much anything and are upheld as law in that locale. Not many residents ever consider that they can be taken to extreme enforcement.The conflict occurs when they are so unyielding or deal with personal property. To say that a child’s free lending library is going to open the floodgates of people everywhere creating extra buildings and structures is a bit overkill. The other conflict is, that no action really needed to be taken where no obstruction or harm occurred.This isn’t an isolated incident – to say that the library or the child wasn’t targeted isn’t exactly true. Lemonade stands, gardens, cupcake making and other children’s ventures are targeted all the time. It’s always met with the same clinical response.Coleman said:

We empathize with them, but we still have to follow the rules. We need to treat everybody the same. So we can’t say if somebody files a complaint but we like the little libraries — we think they’re cute — so we ignore it. We can’t do that.

Why not?Neighboring towns like Prairie Village have residents who display such illegal accessory buildings, and have gone on record to say that they simply wouldn’t enforce codes that would restrict little free libraries.With his father’s help, Spencer is going to appear before city council. It’s absolutely incredible to me that a child would have to fight the city over an ordinance – in order to have lending book box in the yard.Heather Callaghan is a natural health blogger and food freedom activist. You can see her work at NaturalBlaze.com and ActivistPost.com. Like at Facebook.