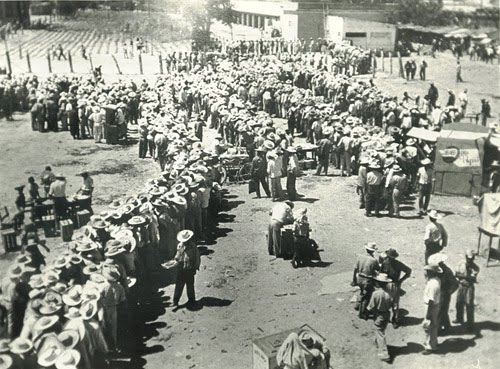 A couple of days ago, I speculated who else might be crossing into United States via our southern border – besides the “innocent” children. You may review it here.

It certainly appears, at least to me, that no one is being denied entry – which led me to my “Fun with Conspiracy” scenario, where Obama is allowing this to occur (that’s obvious to anyone) and actually encouraging it (again – obvious) to overwhelm the immigration system (Cloward and Piven).

The conspiracy part was that he was also allowing terrorists to freely walk in and set up shop for attacks, as an excuse for him to impose martial law.

Conspiracies aside, we have been hearing for years that we must do something, but that is impossible to seal off the whole southern border, and “do you think we can just round up millions of illegals?”

In fact, this problem at the southern border has been plaguing America for well over 50 years.

At the time Eisenhower took office, in 1953, at least 3 million illegals had already crossed the border and were residing in the United States.

Ike called it as he saw it, quoting a New York Times article: “The rise in illegal border crossing by Mexican ‘wetbacks’ to a current rate of more than 1 million cases a year has been accompanied by a curious relaxation in ethical standards extending all the way from the farmer-exploiters of this contraband labor to the highest levels of the federal government.”

A couple of things should have jumped off the page. First, the fact that the New York Times would ever publish such a thing and second; just imagine anyone, much less the president, quoting that passage. Today, he would be perp walked out of the Oval Office.

Needless to say, Eisenhower had a real problem with illegal aliens.

In 1954, he appointed retired General Joseph Swing to head up the INS (Immigration and Naturalization Service) and gave him full authority to do what he had to do to stop the flow and deport the ones already here.

He tasked 750 of those agents to travel to Southern California and Arizona and round up 1000 illegals per day.

And what happened then, is what we have been saying for years. Another half-million fled the country on their own rather than be arrested.

It’s called self-deportation, and when illegals know an administration is serious, that’s what happens.

They then moved on to Texas where they apprehended another 80,000 “wetbacks” and another 700,000 self-deported.

The illegals very quickly understood that Eisenhower wasn’t going to mess around. Consequently, illegal immigration decreased by 95% in the ’50s.

After Ike left office, it was back to a relaxed attitude under Kennedy and every other president since, including Reagan.

Eisenhower proved it could be done, if one has the will of a Supreme Military Commander. Simply give the order that it be done and charge the right people to do it – period.