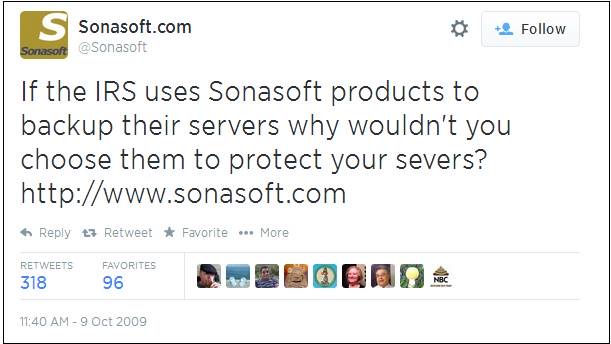 On Friday, Mac Slavo reported on Congressman Darrell Issa’s (R-CA) statement in which he called the Internal Revenue Service’s claim that Lois Lerner’s hard drive crash resulted in a loss of emails “ridiculous.” Most of us know that information from crashed hard drives can be recovered, though it costs a lot of money. However, as Mac pointed out, we could simply obtain a copy from the National Security Agency since they are collecting this kind of information. But something more telling has come to light: The IRS uses as an email archiving company to back up its emails.

That’s right, Sonasoft, whose slogan is “email archiving done right” touts the IRS as a customer.

The world’s leading companies rely on Sonasoft products to secure their operational data. Sonasoft’s award winning disaster recovery software for Microsoft Servers: SonaVault, SonaExchange, and SonaSQL is known for ease of use and reliability for email archiving, backup, recovery, replication and migration needs.

The site goes on to pledge, “secure and guaranteed email archiving.”

“The SonaVault Email Archiving software solution employs reliable safeguards including encryption to ensure that the email is tamper-proof without the possibility of being altered. Our secure archiving solution is achieved through encryption and hash calculations to determine the tampering of emails. SonaVault uses Microsoft’s Journaling mechanism to extract and archive messages. This ensures that every message which goes out and enters an Microsoft Exchange Archiving Server is archived even if the message is deleted by the user from his or her mailbox.”

While Congressman Paul Ryan (R-WI) told IRS Commissioner John Koskinen, “I don’t believe it. That’s your problem, nobody believes you,” perhaps he should be looking to have Sonasoft subpoenaed for the backup of the emails they are asking for.

Personally, I don’t trust Paul Ryan (and for obvious reasons), but I’m more aggravated that he demonstrates frustration, but will not do the very thing that most of us Americans would do if we were in his shoes.

I use LiveDrive to backup my data, which is a super service based in England that has minimal cost to backup multiple computers for a flat fee per year. I have no trouble restoring crashed drives or virus-ridden drives from that service. How much more should a company be able to restore those emails that were allegedly erased due to a crash on federal computers?

Personally, I’m not buying that the hard drive crashed. It’s simply too convenient.

In addition to Sonasoft, there are also recipients of Lois Lerner’s emails, right? Have their hard drives crashed? I doubt it. As Ben Barrack pointed out, the emails that are missing are probably the most damning as they may be linked to Malik Obama, Barack Hussein Obama’s brother who is a financier of the Muslim Brotherhood.

So my question to Paul Ryan and other congressmen who claim to be after the truth is, why are you not subpoenaing these emails from the archives of SonaVault? If you aren’t doing that, then you should not be trusted as a person who is after the truth, but is merely a political version of a WWE wrestler who plays the part when before the cameras, but when you’re off camera you’re having drinks with the enemies of America.

By the way, if you want to help this situation out, email this article to Paul Ryan and make sure he has the information. If he doesn’t know about this, he won’t be able to see he doesn’t now. Click here to send him a link to this article. In fact, click here and send one to Congressman Darrell Issa. Let’s hold them accountable for holding these criminals in office accountable.