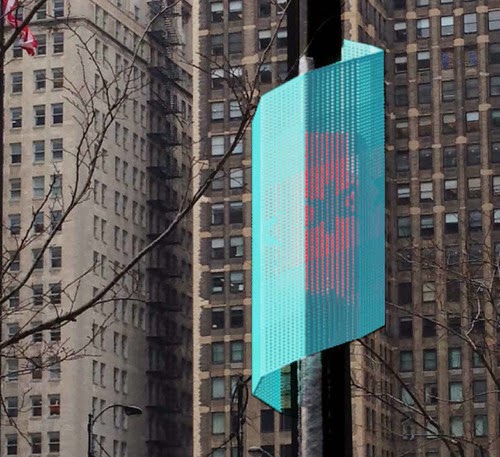 Planners from the Urban Center for Computation and Data, part of a joint initiative between the University of Chicago and Argonne National Laboratory, are implementing a project called “Array of things,” in which spy boxes disguised on light poles will collect data.  The project involves installing “curled metal fixtures,” or data-collecting-sensor boxes, throughout Michigan Avenue, a swanky part of Chicago. Funded by Argonne, the installed systems will count pedestrians “by observing cell phone traffic,” presumably via users’ Wi-Fi-network. Researchers stated the data-collecting-sensors, which are subtly disguised as fancy artwork, will also record air quality, light intensity, sound volume, heat, precipitation and wind, as reported by the Chicago Tribune, in order to make the city “safer.” Attempting to quell developing concerns from privacy advocates, computer scientist Charlie Catlett affirmed that planners took precaution when designing the sensors, ensuring that the equipment can only “count contact with the signal rather than record the digital address of every device.”

Scientists insist the technology is necessary in order to keep Chicago a “more efficient and cleaner place to live,” and to facilitate and encourage “innovation.” Despite developer’s affirmations, history shows the public has been blatantly misled on the capabilities and uses of advanced surveillance technology, and always in the name of “safety” and “security.” “Array of things” is simply another invasive, breach of privacy, funded primarily by American tax dollars for the purpose of normalizing 24-hour government surveillance.

Researchers intend to launch the sculpture-resembling spy boxes throughout eight intersections near Michigan Avenue by mid-July, hoping to install dozens more around the Loop and hundreds more across the city into neighborhoods by the end of the year. In order to reach optimal concealment, the spy boxes were designed by the School of the Art Institute, secured by more than $1 million in donations from Cisco Systems, Intel, Zebra Technologies, Qualcomm, Motorola Solutions and Schneider Electric. “Planners envision a permanent system of data collection boxes that can be used by a range of researchers from the public, private and academic sectors who want to test ideas but wouldn’t have the resources to build the testing infrastructure,” reported The Chicago Tribune. Developers say the sensor-collecting boxes, which will connect to the Internet, can be easily updated and will be capable of adapting to “the latest and greatest technology.” Responding to privacy concerns, Catlett assured that the boxes “…don’t collect things that can identify people. There are no cameras or recording devices.” He added that sensors will collect “sound levels but not recording actual sound. The only imaging will be infrared.” Fred Cate, an expert on privacy matters related to technology, weighed in adding, “Almost any data that starts with an individual is going to be identifiable.” In regards to tracking mobile phone data, “you actually collect the traffic. You may not care about the fact that it’s personally identifiable. It’s still going to be personally identifiable.” Besides citizens being spied on by fancy artistry, some are concerned about the repercussions of Corporate America gaining access to the data. Currently, the dragnet of data swept up by the NSA is used to target consumers, using in many cases, information provided involuntarily. “If you spend a million dollars wiring these boxes, and a company comes in and says we’ll pay you a million dollars to collect personally identifiable information. What’s the oversight over those companies?” asked Cate. Officials say not to worry because all of the collected data will be “immediately published,” exposing the project to scrutiny. The claim is laughable. Proven by whistleblower Edward Snowden, the U.S. government has gone out of its way to conceal surveillance programs from the public, offering zero transparency. Government agencies, including the NSA, have proven to be incompetent when it comes to managing the massive amount of data it has mined; making it very unlikely that officials will actually follow up on their promise to publish everything they record. Marketing the program as beneficial to the public is downright fraudulent, when in all actuality, installing data-collecting-sensor boxes throughout cities and neighborhoods is continuous surveillance in disguise. Additional sources:

BIO: Julie Wilson is an Austin-based investigative journalist whose articles have been cited on sites such as Natural News, Infowars, Ben Swann and The Liberty Beat. Follow me on Twitter @JulieJay2904! If you have any tips please email [email protected].