Pastor Heath Mooneyham wants you to get your butt in the pew, and he’ll go to just about any lengths to do it. With over 2,000 likes on Facebook, Ignite Church from the outside looks like a million other buildings nestled between any given McDonalds and Walgreens in your typical Midwestern town. But it’s what’s going on inside, and what they’ll do to get you there, that has stirred controversy in the streets of Joplin.

“Want to win a Black Rain AR-15?” Ignite Church asked on its Facebook page before Father’s Day on June 15.

“Dads, you earn an entry for yourself, each child you have and if you bring your dad to church. Those that registered last week get to register again!!! Don’t miss this.”

In the world of Christian evangelism, talk of zombies and guns have all been incorporated into the greater legacy of the Jesus movement to create a very American brand of Christianity. And like so many things in America, bigger is always better.

“We are giving away a Smith and Wesson AR-15 to somebody, but that really is like bread crumbs. You can kill a weak zombie with that thing,” Mooneyham said on a You Tube promotional video.

“But if you really want to double tap a zombie in style, you’re gonna want our grand prize.”

The grand prize was a Black Rain AR-15, what he called “the Lamborghinis of AR-15s.”

“You’re a big boy. You got big balls between your legs, you’re a dad right? Get up set your alarm, don’t be a wuss, get to church.”

“So get your butts to church, if you’re late don’t cry to me that you’re a pansy and you cannot set your alarm, alright? You’re a big boy. You got big balls between your legs, you’re a dad right? Get up set your alarm, don’t be a wuss, get to church,” he said.

If that sounds extreme, it’s all certainly part of the branding. While Mooneyham told the Joplin Globe that they’re “just dudes” who aren’t “trying to put on a show for anybody,” the homepage takes on a strange aesthetic falling somewhere on the spectrum between Islamist extremist home page and Mountain Dew promotional site.

The church, clearly in the vein of the youth ministry model, is heavy on live bands, tattoos, and everyman Jesus worshipping.

And it’s that 18 to 35 demographic Mooneyham’s aiming for with the highly stylized church, broish talk and AR-15 raffle. “That’s the biggest black hole in our society,” he said.

As for criticism about the gun giveaway, Mooneyham isn’t too bothered about it.

He sees no correlation between guns and violence, citing the biblical story of Cain and Abel to prove his point.

“People are crazy, period. Murder has been going on since the beginning of time. The first murder recorded in the Bible was with a rock.”

He says that the AR-15 “speaks our language” in the same way that quilts speak to octogenarian parishioners in some other church, and it never entered their minds they’re “potentially harming society by giving away a gun.”

“People are crazy, period. Murder has been going on since the beginning of time. The first murder recorded in the Bible was with a rock.”

“It’s easy to not like us. It’s not hard,” Mooneyham said. “You don’t need to go out and find ammunition, we’ll just hand it to you — we give away guns and talk about sex.” 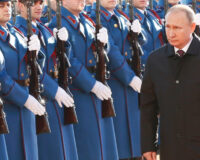