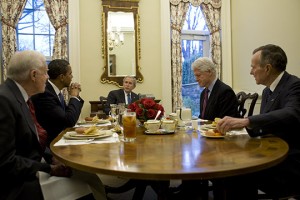 Since leaving the White House, the Clintons have earned at least 100 million dollars and currently have a net worth of up to 50 million dollars.  So why in the world do the taxpayers need to give Bill Clinton $944,000 to fund his extravagant lifestyle in 2014?  If ordinary Americans truly understood how much money many former politicians are being handed every year they would go bananas.  According to a Congressional Research Service report that was published earlier this year, the federal government has given a total of nearly 16 million dollars to Bill Clinton since 2001.  Each one of those dollars is a dollar that some U.S. taxpayer worked really hard for or that we had to borrow.  Yes, we don’t want our former presidents to go broke for a whole bunch of reasons, but it is absolutely absurd that we are showering them with millions upon millions of dollars.

Yesterday, I wrote about the trouble that Hillary has caused for herself by claiming that the Clintons were “dead broke” when they left the White House.

The way things have been set up, there is no way in the world that any former president is going to be “dead broke” ever again unless the law is changed.

According to the Washington Post, Bill Clinton has been receiving about a million dollars a year “for office space, staff, and a pension” since he left office…

According to an April report from the Congressional Research Service, Bill Clinton has received nearly $16 million in pensions and benefits from the federal government since leaving office. That includes $944,000 in fiscal year 2014 for office space, staff, and a pension.

That is insanely wasteful.

George W. Bush is actually receiving more money from the taxpayers than Clinton is each year…

Bush the younger is costing taxpayers $1.28 million this year, and averages 4 per cent more annual than Clinton.

The government’s General Services Administration inexplicably budgeted $102,000 for Bush’s telephone expenses in 2014, and planned to spend $135,000 more on furniture, computers, office supplies and other miscellany.

Does he have the world’s worst calling plan?

According to author Robert Keith Gray, approximately 1.4 billion dollars is spent on the Obamas every year.  Here are just a few nuggets from his book…

-The Obamas have the “biggest staff in history at the highest wages ever“.

-There is always at least one projectionist at the White House 24 hours a day just in case there is someone that wants to watch a movie.

-The “dog handler” for the family dog Bo reportedly makes $102,000 per year and sometimes he is even flown to where the family is vacationing so that he can care for the dog.

But at this point we spend more on our presidents than any nation on the planet does on their entire royal families.

Over the years, the political elite have tilted the rules of the game dramatically in their favor.  Neither political party objects because they both benefit from riding on the endless gravy train.

If you can believe it, there are close to 15,000 retired federal employees that are currently collecting federal pensions for life worth at least $100,000 annually.  This list includes names such as Newt Gingrich, Bob Dole, Trent Lott, Dick Gephardt and Dick Cheney.

And most people are astounded to hear that more than 4 million dollars a year is spent on the “personal” and “office” expenses of each U.S. Senator.

Not that they need the money.  As I wrote about recently, more than half of the members of Congress are millionaires at this point, and nearly 200 of them are multimillionaires.

Politics in America has become a game that is played by the elite for the benefit of the elite.  If it seems like they are “out of touch” with ordinary Americans that is because they are.

Meanwhile, things just continue to get even tougher for the middle class.  Even though money is flowing like wine in Washington D.C. for the moment, a brand new Gallup survey discovered that 58 percent of Americans believe that the economy is getting worse.

It is shameful that our politicians are living like rock stars while tens of millions of American families are suffering so deeply.  For example, consider the case of Andrew and Kristen Cummins…

Andrew and Kristen Cummins and their 8-year-old son Colton have been in and out of homelessness for the past four years.

It all started when Andrew moved to Indiana for a temporary warehouse job that was supposed to turn into a full-time job. But instead he said he was let go as soon as the company would have had to start providing him with full-time benefits.

Since then, he has worked at several other temporary jobs that haven’t turned into full-time work either.

Kristen has been in the same position: She has also had temporary jobs, but nothing has stuck.

So for now, the three stay at a local homeless shelter called the Haven House. Since women and men are required to sleep in separate areas, Andrew doesn’t get to see his wife or son after 9 p.m. each night.

There are millions of other families just like them that are scratching and clawing their way through life the best that they can.

Perhaps our politicians should actually do something to help them instead of sitting back and living the high life at our expense.