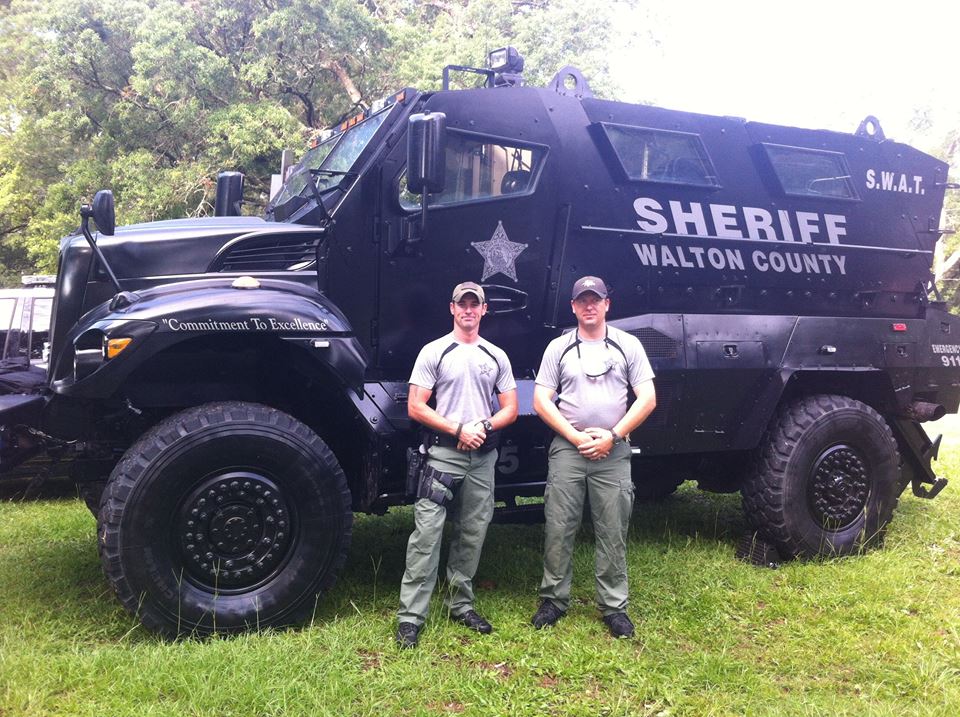 The Walton County Sheriff’s Department, a department formerly known for community-oriented policing, has joined the ever growing list of departments across the country that have chosen to abandon common sense and deploy an IED resistant armored vehicle.

Walton County is a part of Florida that is so crime free you can leave your doors unlocked. When Hollywood location scouts were looking for a community so perfect that it appeared to be fake, they came to Walton County. The Truman Show, staring Jim Carey, was filmed on location in a small Walton County community. The twins in the movie, were both Walton County lawmen on set to direct traffic. They were so personable and friendly, they wound up in the movie. Yes, they are really named Ron and Don.

It’s hard to imagine that community being policed by the 30,000 lbs International MaxxPro MRAP. The weapon, just back from the wars in Iraq or Afghanistan, was recently acquired by the department. Now that it is painted black and labeled as a SWAT vehicle it is ready to be used not against Iraqi insurgents in Fallujah, but against Americans on Main Street.

The American Civil Liberties Union sees this as a problem, and has launched a nationwide investigation into the militarization of local law enforcement. The ACLU believes the mentality created by the presence of weapons of war causes an escalation in violence.

Sheriff Michael Adkinson, Jr. made a statement on the department’s Facebook Page.

“It is important to realize that ANY rifle round will penetrate an officers body armor. This includes the common .22cal round. In the past 6 years the WCSO has come under fire from HUNDREDS of rounds during calls. We routinely take assault weapons of persons arrested. An example of this was an incident in which a man handcuffed an AK-47 assault rifle and confronted deputies. During another violent encounter over 100 rounds were exchanged during a shootout inside DeFuniak Springs. During the same time frame we have dealt with 9 barricaded subjects the majority of which had rifles at their disposal. The armored vehicle allows us to get close to the suspect without unnecessary danger. Again a rifle round can penetrate a vehicle and body armor. Certainly a $2,500 surplus vehicle is good insurance. We handle almost double the number of calls for service from a decade ago and unfortunately not all of those can be handled with customer service. This is not the federal government intruding on your civil liberties Would you really want them sent into harm’s way without the best protection available, simply because the military originally purchased this vehicle? The men and women who serve as deputy sheriff’s in this county are your friends and neighbors. This is your Sheriff trying to protect your deputies.”

Not all of the information in this statement is accurate. A .22 round will not penetrate even soft body armor. A video of a live fire test is available here. While many rifles will penetrate soft body armor, the rounds do not typically penetrate the ballistic plates in vests that cover vital organs. Walton County deputies are equipped with such plates. If this is a major concern, it might have been a better use of department funds to purchase better body armor.

The incident involving the AK-47 happened six years ago, and it wasn’t really an AK-47. It was an AK-47 styled rifle, but it was semi-automatic. Though it looked like the rifles carried by insurgents, it lacked the capacity for fully automatic fire. The man was fatally shot by a deputy. He had intended on committing suicide prior to the arrival of law enforcement. Unless the Sheriff plans on deploying the MRAP for every domestic violence call in the area, it is unlikely it would have played a part in the incident.

This journalist could not find an incident in which over 100 rounds were fired in Defuniak Springs. In a town of less than 6000, such an incident probably would have made the news. There was an incident back in 2009 when witnesses say 30 to 40 rounds were fired, most by Walton County deputies, when they killed an alleged cop killer and wife beater from a neighboring county. The deputies were able to successfully defeat the man without the use of guided-missiles, chemical weapons, airstrikes, drones, or MRAPs.

The procedure for dealing with a barricaded suspect would have little to do with deploying a vehicle designed to transport soldiers to and from battle without being ambushed. Other than something intimidating to park outside the home, the vehicle serves no purpose. Cranking up the 9.7 liter engine to approach a barricaded building would likely alert the suspect and put the deputies at greater risk. In a dynamic entry to take down a barricaded suspect, the most important factor is surprise. Surprise is lost when a noisy, massive armored vehicle approaches a building. Deploying an MRAP to get close to the building is likely to get deputies shot.

This vehicle is an implement of war. It has no place in this county. The decision to bring this to a small community will only increase violence against citizens by creating a combat mindset in deputies. This violence will be returned, and deputies will face violence on a level not seen before in Walton County.

The last Walton County deputy killed in the line of duty was Robert Gatlin. He was killed in a search for illegal whiskey more than seventy years ago… in 1942.