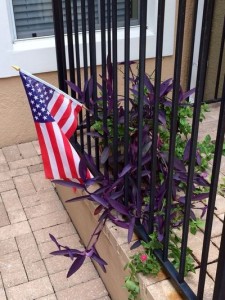 A Florida HOA sent a letter to a resident of their community, stating that he owes $8000 in fees and threatening him with a foreclosure lien on his home – over the American flag he placed in a flower pot on his porch.

Larry Murphee lives in the Sweetwater community in Jacksonville, Florida. He’s been battling his friendly neighborhood HOA over the flag for more than two years.

WTEV talked to Murphee about the ordeal:

Murphree has  been offered free services by First Amendment Attorney Luke Lirot out of Clearwater.

WTEV contacted the law office that represents the HOA, and attorney Michelle Haines told them that if payment is not made within 30 days, the law office can move forward with foreclosure on Murphree’s home.

HOAs may try to impose certain rules on where flags can be placed, but state and federal laws say they don’t have that authority.

Last year, after a similar fight, Murphree filed a lawsuit and settled out of court, but the HOA flag display rules have been rewritten since then. He said he won’t stop until he can freely fly his flag:

“When I first moved here, I loved it. it was wonderful. But it got where I’m being nitpicked more and more. I’ve lost a lot of friends and neighbors moving out. I don’t want to move.

I want it to go away. It’s such a minor little thing and they keep coming after me,” he explained.