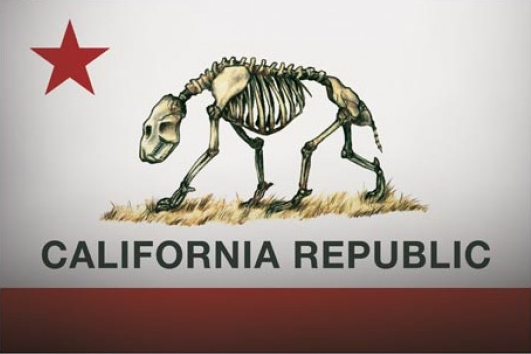 Courtesy of The Peoples Republic

A Silicon Valley venture capitalist by the name of Tim Draper, has proposed that perhaps it is time for the various regions of California to part ways. His goal, is to let California be divided into six different states. This isn’t exactly a new idea. There have been proposals to divide the massive state since California achieved statehood. Of course, none have succeeded. As a matter of fact, there have only been a handful of times in American history, when part of a state has managed to secede to form its own state, and none of them have occurred since the Civil War.

So what makes this time any different? Well for one, Tim Draper appears to represent the monied interests of the Silicon Valley. He’s dumped 2 million dollars of his own cash to fund the movement, which is now gathering signatures for a ballot in the next election. Most state secession movements fail because they are grassroot affairs, something that most state governments (or frankly any government) don’t share the same interests with. If breaking up a state doesn’t benefit the people at the top, then they won’t let it happen.

Which is why it’s interesting that the proposal is headed by a Silicon Valley mogul. While there’s no proof that Tim Draper is being backed by larger corporate interests, it would certainly make sense. Part of his proposal is to grant the Silicon Valley its own state. It would obviously benefit the major tech companies of this region to have a state to themselves, where they could wield massive influence. Considering the amount of money these tech interests hold, I doubt California stands a chance. Heck, the net worth of Google’s CEO alone ($2.3billion) could probably match the collective wages of every state legislator a thousand times over. If they want their own state someday, they’ll get it. In short, this isn’t a grassroots movement.

Of course, I’m making a few leaps here. As far as I know there isn’t a hidden corporate plot to divvy up California, even if it makes a lot of sense to me that one could feasibly exist. However, there is another interesting observation to be made that may indicate a future break up of California. First, you need to take a look at past examples of state secession.

After the American Revolution, the western counties of Virginia separated to form the state of Kentucky. Maine used to be a part of Massachusetts before it successfully seceded from the state in 1820. During the Civil War, the Appalachian counties of Virginia seceded to form West Virginia before joining the Union. Even during the American Revolution a similar precedent was set, when Vermont seceded from New York and New Hampshire, and eventually joined the United States fourteen years later. What do all of these examples have in common?

In each case, when the new state was born from the old, the original state continued to exist. Much like if a parent gives birth to a child, the parent is still alive (minus a few pounds). If you look at the proposed map of the six state California, you’ll notice that none of the states are labeled “California.”

There is South California, West California, Central California, Silicon Valley, North California, and Jefferson. The original California has essentially disappeared. This is why I believe Tim Draper’s secession movement may succeed, or perhaps a similar plan will take root in the future. This may be the “get out jail free card” for California’s political establishment.

It’s no secret that California’s fiscal situation is decades past the point of repair. If a part of the state secedes, surely the original state will continue to hold onto its previous debts, unless arrangements are made with the new state (correct me if I’m wrong in the comments). If however, the state as an entity is completely dissolved, as it appears on the Six State map, what happens to the debt? Of course, the various parties that are owed this debt will scream bloody murder at the thought of California’s dissolution, but there might not be anything they can do about it. This would be the only time a state has erased its existence. There is no precedent for this in American history, so it’s uncharted territory. The politicians might be able to get away with things that they wouldn’t in traditional circumstances.

This could turn out to be an underhanded way for California’s political establishment to ditch its debt, without having to declare bankruptcy and sell off its numerous assets to outraged lenders. They won’t be able to sue the State of California because it will no longer exist as an entity in any way.

While I doubt this proposal will be passed during the next election, as California continues to decline into the financial abyss, the option to “disincorporate” as it were, is going to become very tempting. They can get off scott-free and leave their lenders holding the bag. And if the political class and the corporate class (who unfortunately hold the vast majority of power in this nation) discover that they have a mutual interest, you can bet they’ll probably succeed. I doubt most Californian’s will resist these notions either, if someday the big political players of the state come out in favor of this. Californians are suckers for slick proposals from powerful people, as much as they’d hate to admit it.

As a native Californian myself, and an advocate of localization, I would relish the opportunity to see this bureaucratic mess of a state be gone forever. I’m sure the rest of you humble and genteel folks who live in middle America (affectionately known as ‘flyover country’ to the affluent urbanites of California), would also be delighted to see this liberal paradise finally disappear.

Despite this, I am hesitant and cautious, as I would be with any project that has the support of government and its corporate sidekicks (or is it the corporations and their government sidekicks?). Either way, if you happen to be holding California bonds, now might be a good time to sell.