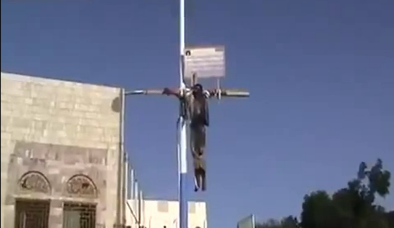 The announcement, recited in Arabic on the first day of the Muslim holy month of Ramadan by spokesman Abu Mohammed Al Adnani into an audio file, effectively renames the group the Islamic State, canceling its previous title of the Islamic State of Iraq and al-Sham, or ISIS.

“We have had all the requirements of the Islamic state like fundraising, almsgiving, penalties, and prayers and still have only one thing which is the caliphate,” said Mr. Adnani in the recording. “The legality of all emirates, groups, states, and organizations, becomes null by the expansion of the caliph’s authority and arrival of its troops to their areas.”

The spokesman also declares the group’s leader, Abu Bakr Al Baghdadi, as the new Islamic State’s caliph. The recorded message was recorded on an Mp3 audio file and distributed through the group’s expansive social media presence.

The announcement revives the idea of an Islamic caliphate that hasn’t existed as a recognized political entity since it was abolished 90 years ago by Kemal Atatürk, the first president of modern Turkey.

There have been various caliphates throughout Islam’s 1,400-year history. The last one, which was governed by the Istanbul-based Ottoman Empire, extended across vast lands throughout North Africa, the Persian Gulf, Eastern Europe, modern Greece and Iraq.

A few days ago we have stated that soon they will demand allegiance (Bay’at) to this arising power.

Shobeat.com was able to obtain the announcement:

The allegiance was given to Caliph Abdullah Ibrahim Ibn Awaad Ibn Ibrahim Ibn Ali Ibn Muhammad of Quraysh Al-Baghdadi of the tribe of prophet Muhammad, the prophet of Islam, who according to them is descendant of the prophet as mandated by Islam regarding the end-times Caliph/Mahdi:

This will stun Muslim fundamentalists globally to go in full-throttle that a Caliphate is no longer in sight, it’s become a reality.

Now we can even see The Wall Street Journal, a reputable secular source use this terminology, the same terminology used in the Bible regarding the threat of Antichrist. Christians need to read their bibles about “giving allegiance to the beast” or choosing death which will mostly be carried out by beheading in Iraq and Syria. The doubting Thomas must wait and see either the prophets were perfect guessers, or indeed, there is a God.

Now the ISIS will begin to force everyone to give allegiance to Al-Baghdadi.

We doubt that Al-Baghdadi will be the ultimate Caliph, but with the Caliphate established now in Iraq, what is expected is more carnage. Shoebat.com was able to obtain leaked photos of multiple crucifixions by the ISIS:

Just look at the photo above. Expect studded crosses as far as your eyes can see. The Muslim ISIS who hates the cross loves to use it. During the Arab Spring, we stated that the Arab Spring will evolve into an Islamic winter. We said it on Fox News and we were mocked. But we were right.

It is necessary now to learn more Islamic terminology. Begin to learn “Hiraba” and what that is all about.

Hiraba is Islamic law regarding punishments and now you will begin to see it applied in full force in all the areas that the Islamists control. We said it two years prior to the success of ISIS and now you are beginning to see it in full force. “Hiraba” comes straight from the damned Quran:

“The punishment of anyone who fights against Allah and His apostle and do mischief in the land is to be killed or crucified or to have their hands and feet from opposite ends or be banished from the land.” (Quran: The table spread)

It includes 4 styles of punishments; public execution (Qatl), crucifixion (Salb) and as crazy as it sounds amputating one hand and one foot from opposite sides (Yuqata’ Aydihim wa-Arjulihim) or exile (Nafy).

The intellectuals will finally realize that the entire Arab world will be taken over by totalitarian Salafists and Jihadists that will not offer equality between all human beings.

So what now will become of the Christian Arabs? They are not Sunni. There are millions of them in the Fertile Crescent, in Iraq and in Syria.

In the meanwhile, help us to rescue some. PLEASE CLICK HERE TO SAVE CHRISTIAN LIVES