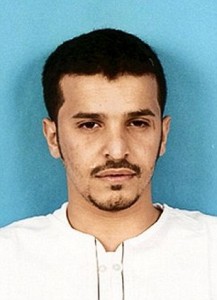 Saudi bomb maker Ibrahim Al-Asiri, who is described by a US official as ‘an evil genius’ Photo: The daily Mail

Ibrahim Hassan al-Asiri has been described as many things ranging from terrorist to genius. A former chemistry student whose hobby is developing and experimenting with explosives, he has an ambition to blow up the West.

The 32 year old implanted his brother with a non-metallic explosive in order that he could assassinate a Saudi Prince. The device worked, blowing his brother to pieces, but the Prince escaped with his life.

His favorite explosive at the moment is PETN, pentaerythritol tetranitrate, a non-metallic explosive with no odor that can slip past sniffer dogs and does not show up on X-ray machines. al-Asiri is a leading figure in the Yemeni-based al-Qaeda in the Arabian Peninsular. (AQAP). It’s thought that AQAP have joined forces with Jabhat al-Nursra jihadists based in Syria and that they have passed their bomb-making skills and equipment onto the rebels, an increasing number of whom are British and European.

There is speculation that the new explosives he is developing could be used to soak clothes worn by would-be suicide bombers, and that the material could be implanted into electronic devices such as laptops and phones, these are all techniques that have been tried by al-Asiri in the past. US officials singled out Apple iPhones and Samsung Galaxy models for extra security checks.

At Heathrow, Lisa Simeone, 57, an American journalist, said security staff were carrying out “vigorous” physical searches which she likened to assault, as well as extra tests for explosives.

In addition to the threat to the U.S terrorist alerts and attacks are increasing in frequency around the globe.

The U.S. embassy in Kampala, Uganda, has warned of a specific threat to Entebbe airport.

“The US embassy has received information from the Uganda police force that according to intelligence sources there is a specific threat to attack Entebbe International Airport by an unknown terrorist group today, July 3rd, between the hours of 2100-2300 (1800 GMT to 2000 GMT),” the statement said.

The Kenyan government has the entire country on a high alert after constant, seemingly random attacks by al-Shabaab militants. The attack on the Westgate shopping mall, Nairobi, in September of 2013 cost 67 lives with many more injured.

26 countries and we’ve only just past the halfway point of the year. The State Department report for 2013 which was published in April this year, makes for dismal reading.

Terrorist attacks worldwide increased by more than 43 percent last year despite the efforts of the U.S. and its allies to destroy or disrupt extremist networks, the State Department acknowledged in a new report Wednesday.

While the Dow breaks all records on the heights it’s achieving the world burns and explodes.

The rebels in Syria have been proven to have an affiliation to al Qaeda, al Nusra and several other terrorist organizations. The White House has actually said that a cause of prime concern is those rebels returning to the UK and some European countries battle-hardened and ready to inflict injury and death on citizens not only of those countries, but also in the United States. He has requested all the enhanced security checks to try and diminish the threat they present. Proof positive that he knows and accepts that they are terrorists.

This therefore is a direct contravention of U.S. Code 2339B – Providing material support or resources to designated foreign terrorist organizations:

Excerpts from a report by the BBC:

The UK drew up plans to train and equip a 100,000-strong Syrian rebel army to defeat President Bashar al-Assad, BBC Newsnight can reveal…

The secret initiative, put forward two years ago, was the brainchild of the then most senior UK military officer, General Sir David Richards…

It was considered by the PM and the National Security Council, as well as US officials, but was deemed too risky…

While it was thought to be too radical at the time, US President Barack Obama said last week he was seeking $500m (£291m) funding to train Syrian rebels – an echo of Lord Richards’ plan.

Followed by a more recent report:

Last month Mr Obama hinted at increased help for the Syrian opposition in a speech at the military academy at West Point.

Now, if you or I have a telephone conversation that mentions certain words we are on a watch list or arrested. If we mix with anyone that the government feels is a terrorist, or even one in the making we get watched or arrested. If we store food we are obviously unstable so we get watched or arrested. The list is endless, yet, here is a man, who quite openly asks our government for money to support a band of roaming cutthroats who have openly admitted their links to terrorism around the globe and he wants to train them in U.S. military techniques and give them arms and equipment.

An Arvada teenage girl arrested in April on suspicion of attempting to support al-Qaeda and its affiliates — including the Islamic State of Iraq and the Levant — was warned for months by federal agents investigating her that her support could lead to her incarceration. (source)

The kid had joined the U.S. Army Explorers and planned to pass on what she learned to the supposed Syrian rebel she met online. She brought a ticket to travel to Turkey and then intended meeting her online boyfriend and crossing the border into Syria.

So,a  teenaged girl is in jail for wanting to teach Syrian rebels U.S. military techniques…learned from the Army Explorers. The president of the United States wants U.S. taxpayers to fund training of the same rebel fighters, and wants to give them a few pre-Christmas gifts of arms, ammunition and other sundry equipment and he’s not in jail…

They both violated the same code. One is a delusional kid who if she had made it to Syria would not have lasted more than fifteen minutes.

The other is the man who is gradually doing away with government by using his executive powers with increasing frequency. A man who daily tramples on the rights and freedoms of those he should be serving. A man who is so full of his own self-importance he has become a liability.

I know which one of the two I would prefer to see behind bars.