We hear much about the drought conditions that continue to affect California, but that’s not the only state that’s suffering from an ongoing lack of rain. Almost half the states in the country are experiencing drought conditions, and dust storms akin to those in the 1930′s are becoming a more frequent occurrence in some areas.

Oklahoma is baked dry. In the course of the most arid years, each acre of farmland can lose up to 70 tons of soil and then, wherever the dust is dumped, it can smother the crops it lands on.

In the Oklahoma Panhandle, the most remote area of the state, recent rainfall has been so meager that fears have been kindled of a return to the apocalyptic “Dust Bowl” scenes of the 1930s. Back then, agriculture collapsed and thousands of people left. 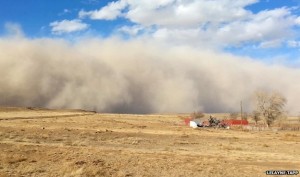 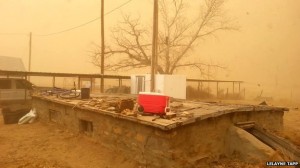 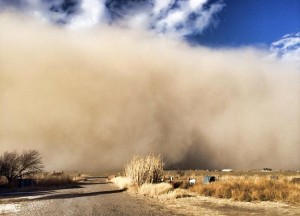 Texas too has suffered massively from lack of rainfall with Wichita Falls even looking at ways to prevent the relentless evaporation from reservoirs in the area. (source)

Contestation over water rights looks set to increase as we move though what for some is going to be another long, hot summer.

Some western states prohibit the collection of rainwater, so even when it does rain the water is wasted when it could be conserved for future use.

Unless something is done, a long term plan formulated, life in a good proportion of the United states is going to become unbearable. Vast tracts of land once used for grazing or food production will lie fallow. The dust bowl conditions of the 1930′s should not be forgotten, they could be returning to a town near you much sooner than you think.