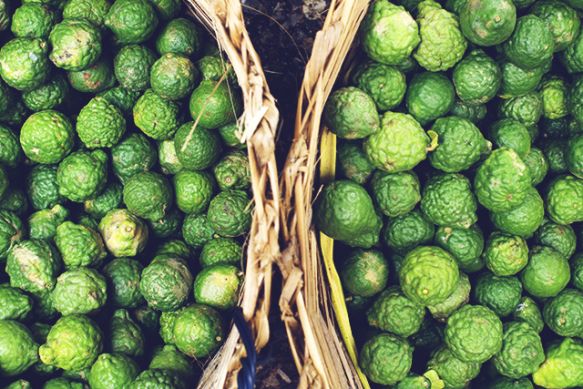 With all of the many problems in the world, the politically correct set is now wringing its hands over a bumpy green fruit. There is much ado about this funny looking little lime that is used in South Asian cuisine.

You see, the commonly used name, “kaffir lime” is racist.  It’s horrible. Truly dreadful. You should be ashamed if that has ever crossed your lips, even though you didn’t know any better. By calling that lime by its common name, you have insulted at least half of the population of the African continent. Don your white hood right now, because apparently “kaffir” in Africa is the equivalent of the racist “N” word in America.

PCC now refers to them simply as “lime leaves,” a term approved by the Oxford Companion to Food, said PCC food writer Jill Lightner, who saw the original article and worked on the changes.

Why take such drastic steps?

“Food names can be tricky, particularly with foods from politically complicated regions or with a difficult colonial history. This issue here isn’t remotely complicated: hate speech doesn’t belong in the produce department. No one questioned the need for the change, either within the company or (thus far) at any of our suppliers we’ve gotten a response from,” Lightner said in an email. (source)

An astonishing amount of research has gone into the origins of the name of this offensively-tagged lime.

The K-word has a long, complex history, but how it came to refer to a type of citrus fruit is a bit murky. The Arabic word kafir was originally used to refer to non-Muslims, but over the centuries it was adopted by white colonialists to describe black Africans. By the 20th century, kaffir was widely understood to be a slur, and its power to insult and offend only grew in apartheid-era South Africa, so much so that its use became legally actionable. In Sri Lanka, an ethnic group called the Kaffirs retained a neutral understanding of the word, but everywhere else, the epithet is as injurious as they come.

Does the term kaffir lime come from the racial slur, or from the Sri Lankan Kaffirs—or from somewhere else entirely? Vinje, and many other writers who have decried the term kaffir lime, have assumed that kaffir limes are called that because they’re associated in some way with southern Africa. Vinje cites the work of food writerMick Vann, who has claimed on his blog that the term kaffir lime “referred to the Indian, Asian, and Indonesian workers that used the leaf in their cooking and came to South Africa seeking jobs.” This seems unlikely, given that the K-word was used in South Africa to refer specifically to black Africans, not to other people of color. (White colonialists came up with different slurs for Indians, Asians, and Indonesians.) (source)

Cookbook author Garrett McCord was even more direct on his blog post about the offensively-named lime:

Much like the Brazil nuts, racially nicked named “nigger toes” due to their dark color and their—to some—unappealing appearance when in the shell, the kaffir lime is similarly named to reflect attitudes towards a certain group of people. Kaffir limes are bulgy, mottled, and supposedly not as pretty as the smooth and glossy skins of other varieties of lime such as the silver or Persian lime. From this was born the reference to the less aesthetically appearing lime as the “Kaffir lime.” (source)

The accelerating ubiquitousness of the K-lime term is of concern, because as the machinery of our mass consumerist, food-obsessed society in North America becomes more accustomed to the lime with its current name, there is a distinct possibility that it will become mainstream, an everyday ingredient that we “need” and demand—and a racist term will become embedded in our culture. Economics drives the globalization engine that brought these limes into our grocery stores, and there is no denying that there is a link between economic and cultural globalization. However, it does not mean we must also import the K-word, with all its cultural and racist connotations, when there is no reason to give these limes this name, as these limes are not called K-limes in Southeast Asia where they originate.

Some may argue that this lime’s name in North America is unrelated to its racist meanings in South Africa, but I disagree. Material culture studies by academics may wish to describe this as a matter of social dualism, where the physical lime has no bearing on the issues of racism, colonialism, slavery, class, ethnicity, and economics that the K-lime’s name comes wrapped up in, but I do not accept that it is okay to use a term that is offensive, insulting, and derogatory just because “I don’t mean it that way.” (source)

Vinje isn’t the only one who is dithering over the name of this lime.  There is an entire movement on social media to “help” people to understand that they are, however unwittingly, being racists.

“Kaffir-No-More” is on Twitter, urging people to “out” restaurants and stores that use the horrible slur.

Kaffir Lime is like saying N*gger Lime – let’s stop it & call it Makrut – PLEASE RT me & get the word out! Post pics of menus, sites, recipes & tag them.

There are many heartwrenching tweets.  People are hurt over this. We must DO SOMETHING!

They’re so confused about the “haters”.

This person struck a blow for kindness everywhere when she read the ingredients on a food item.

@KaffirNoMore I just looked at some red Thai sauce and it had k*affir lime. Put it back on shelf.

And for goodness sakes, be certain your local market is not engaging in this “hate speech.”

And don’t worry – Wikipedia has also been notified that some adjustments should be made.

“The name ‘kaffir lime’ should be avoided in favor of ‘makrut lime’ because Kaffir is an offensive term.”http://t.co/ewU75MWDia

So adamant are the anti-racist-limers that this story was covered in true bleeding heart form on Jezebel, Yahoo, and Slate.

It seems like with all of the real problems in the world, taking to the Twittersphere to right the wrongs of the “makrut lime” (see? I can be politically correct too!) is nothing short of ridiculous. About half of the residents of Detroit don’t have running water and must defecate in buckets. The homeless population in America is exploding. If you lose your job, good luck finding another one.

If you are this hurt and degraded by the name of a piece of fruit, you really have far deeper issues to deal with than perceived racism.

But these supposed kind-hearted people are up in arms over the name of a lime? Pardon me while I recommend you direct your passionate activism to the real issues facing our country.