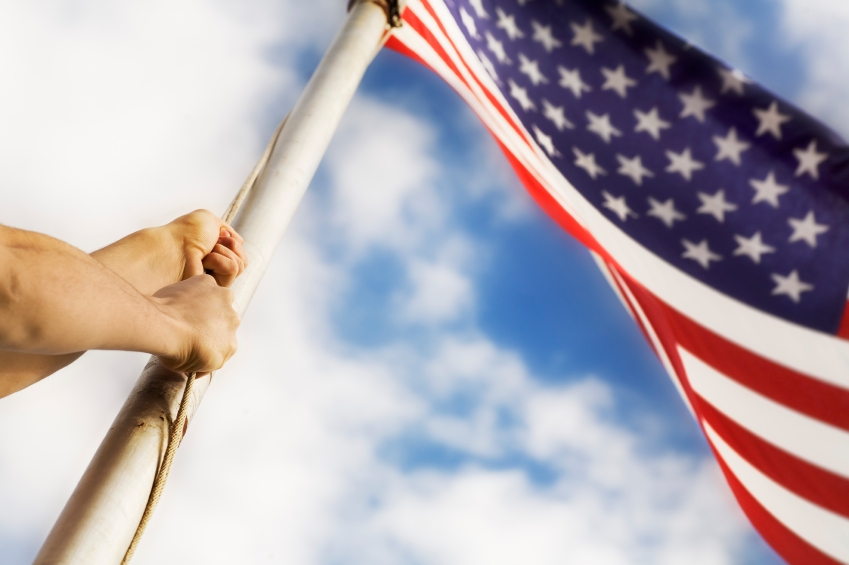 Yesterday in Murrieta California the tensions reached a new level as pro-amnesty activists took to desecrating the American flag, and several protesters were quoted as shouting, “F*ck America.”

Earlier in the week it was reported that anti-illegal immigration protesters gathered to try to stop busloads of illegal immigrants being dumped into their area:

Anti-immigration protesters impeded the arrival of several buses transporting undocumented immigrants into a US Border Patrol station in Murrieta, California on Tuesday, some 60 miles north of San Diego.

The arrival of the group of Central American families had been decried by Murrieta’s mayor, Alan Long, who alleged that the group of immigrants, adults with their children numbering about 140 people, represented a public safety threat to the community.

These are simply concerned citizens taking advantage of their First Amendment rights.

This quickly drew the ire of amnesty supporters who have also gathered to protest in Murrieta. Yesterday those protests hit a new level of disgust as amnesty supporters used profanity, burned at least one American flag and shredded several more. Here are a couple of pictures via Breitbart.com:

When witnessing such atrocities it is even harder to swallow being characterized as a “domestic terrorist” or “right-wing extremist” by my own government. Yet it is those who actually care about the future of America that are being painted as villains. Those who seek to tear her down are welcomed with open arms.

I believe in free speech and I will use my own right to it to say exactly what I feel about those who would sink to such levels.

These are spoiled ingrates who think that America owes them something. America did not become great because of people like this. To the contrary, this country is being torn down because of people like this. They have a criminal mentality and are supporting the criminals who are coming here ILLEGALLY over the law-abiding citizens who are trying to look out for all of us.

They are frankly too stupid to see it.

They are brainwashed and they are the epitome of the term “useful idiot.”

You only need to read this quote from the Breitbart article to realize where these people are coming from and what the opposition is truly made of:

Bonnie Lewis, an anti-immigration activist, told Breitbart News that she saw one of the pro-amnesty activists dragging an American flag on the ground.

Another anti-illegal immigration activist said that pro-amnesty demonstrators called her a “f***ing whore” in Spanish, and shouted, “F*** America!”

This is the kind of trash we are dealing with in America, and they are multiplying. I’m sure that many of those protesters aren’t even legal. If they are then many have obviously not bothered to learn the language. They have no idea what the true price of liberty is and they have no idea what that flag means to us. They don’t understand 238 years of history that were celebrated yesterday.

Thank God for good people like Bonnie Lewis who have the guts to stand up for the truth. This is not about a humanitarian effort. This is about fighting against a deliberately contrived event that is aimed at the further crippling of America.

We can not afford to give up.

We will find a way.