The bodies of three murdered Israeli teenagers, 16-year-old Naftali who liked to play basketball, 16-year-old Gilad who had just finished a scuba diving course and 19-year-old Eyal with his guitar, will be met by the same ghastly parade of pallbearers who accompany every victim of terrorism. 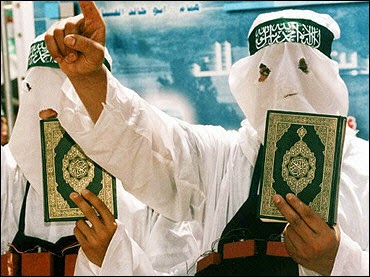 The reporters will scribble down something about “settlements” and the “Cycle of Violence”. The diplomats will urge restraint and remind everyone that the only solution can be found through negotiations with the terrorists. And the pundits will put it all into perspective burying them under layers of words and weighting their coffins down with stones of forgetfulness.

But all the empty words about the “Occupation” and the “Cycle of Violence”, the invocation of a peaceful solution that is always about to arrive, but never does, and the maps that cede more territory to terrorists are addressing a problem that doesn’t exist.

Naftali, Gilad and Eyal were murdered for the same reason that countless people have been killed in Syria, Iraq, Egypt, Afghanistan, Nigeria and Pakistan.

They were murdered in the name of a religious war that has been going on for over a thousand years. Muslims did not suddenly begin killing Jews in 1948 or 1929. They did not begin killing Christians over American foreign policy or the oil business.

Muslims did not begin killing Jews and Christians over foreign policy. They began persecuting and killing their Christian and Jewish neighbors because their religion told them to.

Hamas, the terror group that murdered the three teens, is not a Palestinian nationalist organization, though it occasionally plays the part. Its charter begins with Allah and ends with Allah. Article Five of its charter states that the group extends to “wherever on earth there are Muslims, who adopt Islam as their way of life”. Its goal is to create an Islamic state. Everything else is secondary.

The Hamas charter describes it as part of the worldwide “Muslim Brotherhood Movement”. Brotherhood terrorists kill Jews in Israel for the same reason that they kill Shiites in Syria or Christian Copts in Egypt.

Article Seven of the Hamas charter concludes with the infamous Islamic Hadith which proclaims that the Muslim end times will come only when “Muslims will fight the Jews (and kill them); until the Jews hide behind rocks and trees, which will cry: O Muslim! There is a Jew hiding behind me, come on and kill him!”

Aside from the obvious genocidal bigotry, this is a quote from a text that is over a thousand years old. Its author was not preaching the mass murder of Jews because of settlements in the West Bank. At the time Muslims had subjugated and ruled over the Jewish population of the Middle East. The Jews were no threat to them. The idea of a Jewish army was as ridiculous as traveling to the moon. 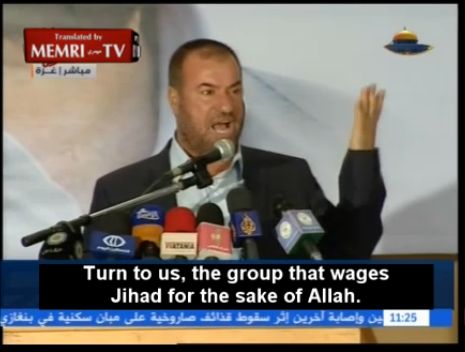 The insistence on a foreign policy explanation for Muslim anti-Semitism is as ahistorical as claiming that Hitler only hated Jews because of the Yom Kippur War. Except that at least both of these events took place in the twentieth century. Islam has been hating and persecuting Jews for over 1300 years before the rebirth of the modern State of Israel.

There are two ways of looking at the worldwide plague of Muslim terrorism. One is to treat every Islamic conflict with Christians, Jews, Buddhists, Hindus and a dozen other religions as being due to some local political grievance of recent vintage. The other is to understand them as local expressions of a historical religious war and the continuation of the wave of conquests that made Islam into a worldwide religion.

We can be like the six blind men feeling around the Islamic elephant and assuming that its trunk and tusks are entirely separate phenomena. Or we can open our eyes and see the elephant in the room.

Hamas’ charter begins with the Koran’s praise for Muslims “as the best people” and damns Christians and Jews to be “smitten with abasement” for having “incurred the wrath of Allah”.

This is not a statement of Palestinian nationalism. It’s Islamic supremacism.

There is nothing negotiable about supremacism. Supremacism cannot be appeased. Supremacism does not want a piece of the pie. It wants the whole pie. The allies learned that the hard way with Hitler. So did the countless kingdoms that attempted to live in peace with the armies of the Mohammedan conquerors.

If Netanyahu, Sharon, Begin and a thousand other Israeli villains of the apologists of Islam had never been born, the followers of Mohammed would have gone on killing Jews just as they had for over a thousand years. If the blue and white had never waved over Jerusalem, if Jews had remained as downtrodden and persecuted in the lands of Islam as the Copts and the Zoroastrians, Naftali, Gilad and Eyal would still have been murdered by two killers who were raised by their mothers to usher in “the victory of Islam.” 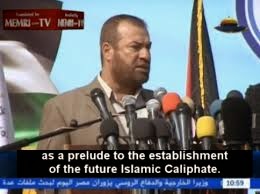 There is no political solution to a supremacist conflict. There is no amount of withdrawals that can make bigotry go away. If a thousand years of Jewish humiliation and persecution did not satisfy the ancestors of the murderers of those three teenagers, how will handing over part of Jerusalem do the job?

Solutions begin with truth. The truth is that Islamic violence against Jews is not recent or exceptional. The murder of Jews by Muslims, whether in Israel or Belgium, is not any different than the Muslim butchery of Christians. Hindus, Buddhists and even minority Muslim splinter faiths. These conflicts cannot be resolved through appeasement. They can only be addressed through resistance.

It is not the victims of a thousand year old supremacist campaign who need to appease their conquerors. It is the conquerors who must come to terms with the horrors that they have inflicted through a campaign of colonialism and ethnic cleansing and seek the forgiveness of their victims.

There can be no peace until Muslims understand that the Mohammedan conquests were a genocidal atrocity that destroyed entire peoples and cultures. Only then can they honestly condemn ISIS for trying to repeat those atrocities. And only then will they be able to live in peace with the rest of the world.