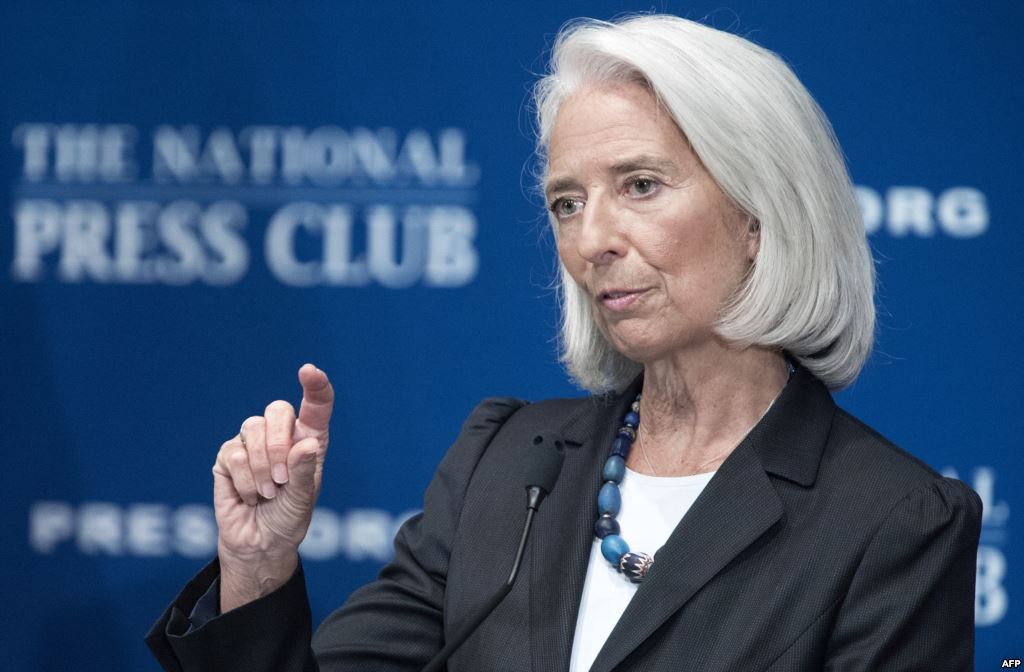 The shocking comments, delivered to the National Press Club in Washington, D.C. earlier this year, suggest that Lagarde was overtly predicting a specific time that we should expect sweeping financial and economic changes across the globe.

“When Lagarde makes reference to 7 and 14, and talking about the ‘financial market jitters’, what I believe she is saying is the end of the old financial system is past and the new one is coming on,” says Quayle. “The new one will be what the Bible talks about such as the Mark of the Beast and the one-world government.”

Lagarde made the comments, in which she referenced numerology, provided dates, and made calculations, to a veritable who’s who of national mainstream media representatives and government information specialists in mid-January of this year:

It’s no secret that there exist private and public organizations comprised of the world’s power brokers, and with Lagarde having taken the reigns of the IMF under somewhat suspicious circumstances recently, it wouldn’t be too far of a stretch to assume that she’s in charge because someone wanted her in charge, or perhaps needed her in charge to oversee the next phase of what’s to come. The elite operating in the upper echelons of our society are reputed to provide clues, forecasts and warnings ahead of calamity, and Lagarde’s cryptic public message may be exactly that.

Do we ignore the fact that the managing director of the International Monetary Fund just explained numerological forecasting to the National Press Club and dismiss it as a joke? Or, do we consider the possibility that Lagarde is overtly warning the world that very big changes are coming?

“People have to understand the number 7 to realize why this is critical.  The number 7 is used 287 times; it’s used in the Old and New Testament.  What is critical about this is these people rule their lives by the stars and numerology.  Never in anything have I monitored in my 25 years being on talk radio that I have witnessed such a blatant presentation of the number 7.  When she says it’s ‘quite a number,’ yes, it’s God’s number, but these people worship their god and their god is Lucifer.”

“The 20th of July . . . what she is telling everybody is they are ready to make their move on the economy, and I believe it is simply going to be the end of the U.S. dollar in a traumatic and dramatic fashion.  The people who aren’t prepared for it are simply going to be wiped out, and they are going to be blown away.”

So, why give a warning ahead of time?

Quayle states, “In the occult, they have a maxim in their world.  They must warn the people they consider useless eaters and stupid people of what they are going to do.  They derive some sort of sick pleasure out of that, and it’s kind of like the ultimate mocking through numerology.”

“The point being is Lagarde made 10 different references in a six minute portion of her speech; you gotta know the message is being sent. . . . What these guys are doing is basically telling everybody ahead of time that they plan to change everything. . . . Jesus said, ‘The love of money is the root of all evil,’ and I’ll take it one step further and say the control of money is the control of all evil.  They are speaking the message loud and clear.  This month, something big starts to happen, and it changes the rest of the world for the next 7 years. . . .We are headed for a crisis or turning point of Biblical proportions that is going to change everything literally in a matter of days, if not overnight.”

Editor: I found this Christine Lagarde video on YouTube that breaks down this theory in an easy to understand fashion. Numerology is not my thing and admittedly this story seems a bit far-fetched to me. However, does it really matter what I think of numerology? No. What matters is if Christine Lagarde and the elite put faith in it. It is hard for me to keep an open mind sometimes but please remember that a lot of today’s truths were once conspiracies. -Dean Garrison