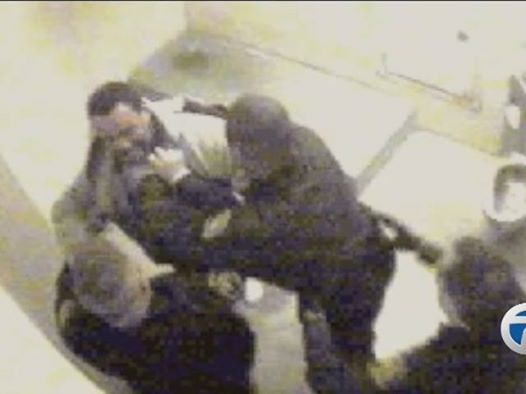 Fernando Davis had been drinking on the night of his birthday and was sent to jail for DUI. He had no idea that his time in jail would lead to him being sent to the hospital as well.

Davis received a beating so violent that the toilet in his cell was filled with blood.

When Davis tried to claim the officers had assaulted him for no reason he was met with opposing stories from all of the deputies, so he hired an attorney.

Davis’s attorney, Daniel Romano, knew that if the cops were lying, it could be proven by simply watching the surveillance footage from that night.

Naturally, the Sheriff’s office claimed that no such tape existed. However, Romano found that it did in fact exist, and obtained a copy.

The tape clearly showed that all of the differing and off the wall claims made by deputies in their reports were completely fabricated.

Deputies claimed that Davis was being belligerent and starting fights with other inmates. They also claimed that he tried to attack them.

The video shows the exact opposite.

In solitary confinement Davis is seen with his hand against the wall, simply conversing with deputies, when all of the sudden he is swarmed by cops.

In reports and testimony, they would later acknowledge pepper spraying him and delivering hand and knee strikes to his body, saying Davis was resisting them.

“My eyesight was taken away, I had no control over my body,” Davis told WXYZ Detroit News. “I don’t know what they did to me, but they were laughing at me. That’s the hurting part.”

The sworn depositions taken from deputies that night, are so contrived that they actually contradict each other’s stories.

Davis has since filed a federal lawsuit which deputies tried to get thrown out.

However, a magistrate and two judges have now ruled that the case should move forward after seeing this video footage.

Right now,all of the deputies involved are still out “protecting and serving.”