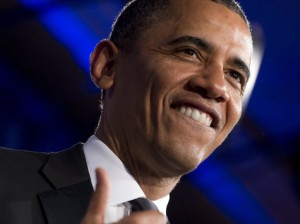 Obama spoke in Dallas on Wednesday after meeting with Texas Governor Rick Perry, and he was asked the big question everyone has been asking — why does he refuse to go to the border and gaze upon the burgeoning crisis his policies helped cause with his own eyes?

The president’s response will crack you up:

“This is not theater. This is a problem. I’m not interested in photo ops.”

Besides, he’s sending people there for him, like Homeland Security Secretary Jeh Johnson. Why? Because Obama’s a very busy guy. He has things to do.

Besides, it’s not like he’s already there in Texas anyway fundraising or anything.

Oh wait, yeah he is.

On Thursday, White House Press Secretary Josh Earnest announced that Obama will attend a fundraiser for the Democratic Congressional Campaign Committee in Dallas next Wednesday and will be at two Democratic National Committee events in Austin on Wednesday and Thursday. (source)

One of the fundraisers is being held at filmmaker Robert Rodriguez’s home. Rodriguez, it has to be noted, is the writer and director of the film Machete:

Machete was the incredibly violent and racist movie whose trailer was released with “a special Cinco de Mayo message for Arizona.” It ends with illegal aliens massacring the fictional version of the Minutemen.

How ugly is Machete?

“Machete” …. is a call for revolution; Mexicans against Americans – and in the words of the character meant to be our evolving conscience, Jessica Alba’s Immigration and Customs Enforcement Agent Sartana, it’s about how those who believe in only LEGAL immigration “deserve to be cut down.” This is her rousing fist-in-the-air message to a gathered army of illegal day laborers.

The enemies are Americans opposed to illegal immigration who indeed are cut down. (source)

Surely that’s not making a statement or anything.

Sen. Ted Cruz even sent him a map with directions from his fundraisers to the border towns.

If President Obama wants to have a real border meeting with @GovernorPerry, here are a couple suggested detours pic.twitter.com/1Welshtcp8

But don’t worry, White House Press Secretary Josh Earnest says the president has all the information he needs…to ask Congress for $4 billion the “emergency” at the U.S.-Mexico border he hasn’t personally seen.

(Half of which is for building more detention centers by the way, not securing the actual border.)

A photo has emerged of the president’s meeting with Gov. Perry, however:

President Obama shares a light moment Mayor Mike Rawlings, with Gov. Rick Perry at the end of the table. pic.twitter.com/kE9GcPbjoF

Seems like the president is taking this all very seriously.