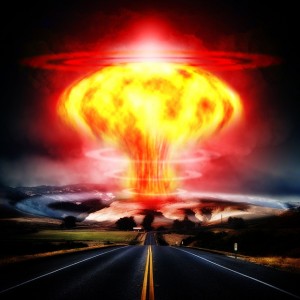 After the horrors of the Fukushima nuclear disaster, how insane do you have to be to fire missiles directly at a major nuclear facility?  No matter what side you are on in the conflict between the Israelis and the Palestinians, everyone should be able to agree that it is utter madness for Hamas to fire rockets at the Dimona nuclear installation in the Negev.  The intent, of course, was to destroy the Dimona facility and create a horrific nuclear disaster in the heart of Israel.  Fortunately, the area is heavily protected by the Iron Dome missile defense system and none of the rockets did any damage.  And it is questionable how much damage to the facility that Hamas missiles could actually do.  But that is not the point.  What matters is that Hamas is trying to do it.  With each passing year, Hamas rockets are becoming more advanced, more accurate and more powerful.  And when Hamas fires some of their best rockets at a major nuclear facility, they are committing an act of all-out war.  If Hamas continues to do this, it could spark a major regional war in which countless numbers of people could die.  Is that what they want?

There has been a lot of criticism of Israel in the mainstream media in recent days, but much of it is quite hypocritical.  Just imagine what would happen in the U.S. if another country fired just one missile at New York City or at one of our nuclear reactors.  If that happened, “glass parking lot” would suddenly be on the lips of tens of millions of Americans all over the country, and the U.S. military would rapidly be preparing for an absolutely devastating response.

Well, it isn’t just one missile that has been fired at Israel.

In recent days, dozens of rockets were fired at Israel before there was any response from the Israeli military at all.

And more than 225 rockets have been fired at Israel since Operation Protective Edge started on Monday night.

At one point, an average of about one rocket was being fired into Israel every ten minutes.

And many of these rockets are being shot directly at Israeli population centers with the intention of killing civilians.  It is a miracle that we have not seen many casualties so far.

But where Hamas has really stepped over the line is by firing at the Dimona nuclear facility.  The fact that Hamas is attempting to create a nuclear holocaust is essentially an act of genocide.  The following is how the Jerusalem Post described the attack…

Three rockets were launched at Dimona in southern Israel on Wednesday afternoon. The Iron Dome intercepted one rocket before it could land, while two other rockets landed in open areas.

Dimona is the location of Israel’s nuclear reactor. There was no indication that rockets damaged any part of the reactor.

Hamas claimed responsibility for the rockets, stating that it had been attempting to hit the nuclear reactor.

And as Breitbart has pointed out, what Hamas has just done is actually an act of nuclear terrorism as defined by the United Nations…

Article 2 (1) of the International Convention for the Suppression of Acts of Nuclear Terrorism states:

Let us hope that future Hamas missile strikes will not do any damage to Dimona either.

In the end, it is questionable how much of a threat Hamas rockets actually are to an extremely well defended facility such as Dimona, but let us not completely underestimate their capabilities either.

According to the Christian Science Monitor, Hamas rockets are stronger and more accurate than ever and are now even capable of hitting Tel Aviv and Jerusalem…

Hamas has emerged from a 19-month cease-fire stronger, savvier, and more effective at hitting Israel where it will hurt the most.

Hamas’s arsenal, estimated at 10,000 rockets, is only marginally bigger than it was heading into its last conflict with Israel, in November 2012. But its mid-range rockets are much more accurate, and it has acquired long-range missiles that reach beyond Tel Aviv and Jerusalem, putting as many as 5 million of Israel’s 8 million citizens at risk.

If Hamas wants Israel to stop attacking, they need to stop lobbing missiles into Israel.

If Hamas keeps launching rockets, it could spark a major regional war.  Just consider what Shimon Peres is saying about the conflict…

“We didn’t start the war today, they started it already several days ago,” he told CNN. “We asked them to stop it… We waited one day, two days, three days and they continued, and they spread their fire on more areas in Israel.”

He also said that a ground offensive on Gaza “may happen quite soon”. Referring to rockets being fired from Gaza, he added: “If they will stop for example tonight, there won’t be any ground entrance – but if they will continue, sooner or later this will be the response.”

And there are news reports today that Israel has already warned 100,000 Gaza residents living in cities near the border with Israel to leave their homes.

That means that a ground invasion could be imminent.

Let us pray for peace because every human life is extremely valuable.

Nobody should want to see a major war between the Israelis and the Palestinians, because if one does happen it will be extremely bloody.

The Middle East is a powder keg that could erupt at any moment.

A single wrong move could bring about a nightmarish conflict that results in countless deaths.