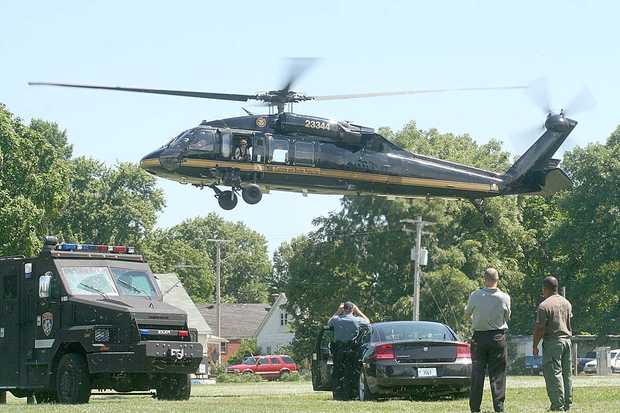 Homeland Security agents, backed by police SWAT teams, armored vehicles and a Black Hawk helicopter staged a bizarre unannounced show of force in front of a school in a small Illinois town, scenes which will exacerbate concerns about the increasing militarization of U.S. law enforcement.

Residents of Livingston, IL., population 850, were shocked to see agents from Homeland Security, the US Customs and Border Patrol and local police agencies swarm a field belonging to a grade school yesterday, with one local telling news channel KTVI, “When all the armored trucks started showing up and everything it made me kind of nervous.”

One child said he thought the spectacle was “pretty cool” and that agents invited the local children to check out the choppers up close, despite the presence of weapons inside the helicopters.

KTVI labeled the presence of the feds a “mystery,” although it subsequently emerged that the school was being used as a staging ground for a raid on a house three miles away. Authorities refused to divulge the purpose behind the raid or if anyone was taken into custody.

Reporter Roche Madden said he learned that ten police cars showed up at the house to conduct the raid, suggesting that the Black Hawk and the armored vehicles were merely on standby.

The sheer number of feds present, in addition to multiple armored vehicles, military-style choppers and other vehicles, in order to conduct a raid on a single house clearly suggests overkill and will prompt more concerns as to the increasing militarization of U.S. law enforcement.

Authorities routinely stage unannounced drills, often in the middle of the night, which terrify startled residents. Critics have asserted that Americans are being conditioned to accept military-style policing as a routine occurrence.

The purchase of armored vehicles formerly used in anti-terror operations overseas has prompted widespread concern that domestic law enforcement in the United States is becoming increasingly militarized and violent. A recent ACLU investigation into the issue decried the fact that American neighborhoods are turning into warzones as SWAT tactics become more brutal, causing an increase in deaths, injuries and property damage.

Back in May, Indiana Police Sergeant Dan Downing admitted that the militarization of domestic law enforcement was partly to deal with returning veterans who are now seen as a homegrown terror threat. A local Fox affiliate reported that the cops were now “armed for war” against such threats.

Editor’s Note: This incident allegedly ended up being a raid of a suspect in connection to child pornography. Fox2now.com reports:

Federal agents used a school yard in Livingston, Illinois Thursday to launch a raid on Godsey’s home, about three miles away.

Prosecutors say Godsey had about 600 videos and more than 1,000 images of minors engaged in sexually explicit conduct.