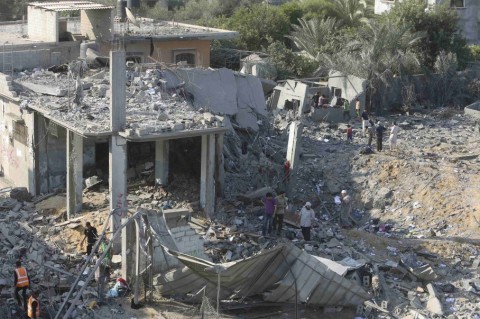 The title of this article is not a direct quote of anyone but it might as well be. The situation between Israel and Palestine/Hamas is bizarre to say the least.

Are you aware that IDF (Israeli Defense Forces) actually make courtesy calls before they bomb some of their targets? Israel National News reports:

Hamas has instructed Gaza residents to ignore text messages and phone calls urging them to evacuate buildings, in an apparent effort to grow its supply of “human shields.” The calls and messages are sent by Israeli military officials in order to give civilians time to evacuate the area, and are communicated before the IDF targets a house terrorists were using as cover for firing missiles at Israel or for other military purposes.

The Hamas-run Palestinian Authority Interior Ministry said in a message to Gaza residents that the messages “are designed to weaken our resolve and to sow panic and fear among us, in light of the failures of our enemies. We call on Gaza residents not to pay attention to these messages and not to leave their homes.”

The message did not say whether Hamas would dispatch personnel to ensure that individuals inside targeted buildings remain inside.

I would sincerely hope that even Hamas is not going to force Gaza residents to stay in their homes and “take their bombing like a man.” Our fictitious friend Ahmed may not like that.

Can you even begin to understand this thinking?

The enemy is polite enough to inform civilians of eminent bomb attacks and the radical military leadership asks them to ignore those calls and die?

This is one of many reasons that Islam is incompatible with America. I don’t know about anyone else but I would leave and live to fight another day. I am not ready to die in, what amounts to be, suicidal fashion in order to win a war. It would be my intent to do anything I could to make sure the enemy dies while I survive. Isn’t that victory?

No, not in Islam.

It gets even better.

To add to the colorful and somewhat curious nature of the modern Israeli military strategy, they also use a method called “roof knocking.” Basically they purposely fire a missile, which actually grazes the roof, to warn the occupants to get out. A short time later they unleash the real attack and destroy the target.

The IDF practice of firing a missile at a civilian home to warn the occupants to leave the building before a larger attack, has been caught on film. Amnesty International has decried “roof knocking,” saying it in no way constitutes an “effective warning.”

A YouTube video uploaded on Saturday shows how a Palestinian house in Samir Nofal is struck by a warning shot before being destroyed about a minute later by a full missile attack.

Amnesty International can complain all they want, and we would expect nothing less from an organization that promotes peace, but this is the most civilized thing I have ever heard from the perpetual Israeli-Palestinian conflicts.

If the crazy Islamists don’t take a phone call seriously and then fail to respond to a warning shot, they will surely get what they deserve.

If they want to volunteer to be human shields then they are just as ignorant as the flocks of sheeple in this country who tend to accept whatever they are told without question.

Supporters of Islamic extremists sometimes remind me of advocates for the patients of Dr. Jack Kevorkian (famous assisted suicide Doctor). They are trying to reach out and protect those who have no greater desire than to die.

However, not all Palestinians want to die. In interest of full disclosure I want to point out that no one died in that particular bombing. Why Israel decided it needed to bomb a civilian residence is another story. Was there a cache of weapons hidden there? Or is Israel simply the bad guy that many claim? That’s up for you to decide.