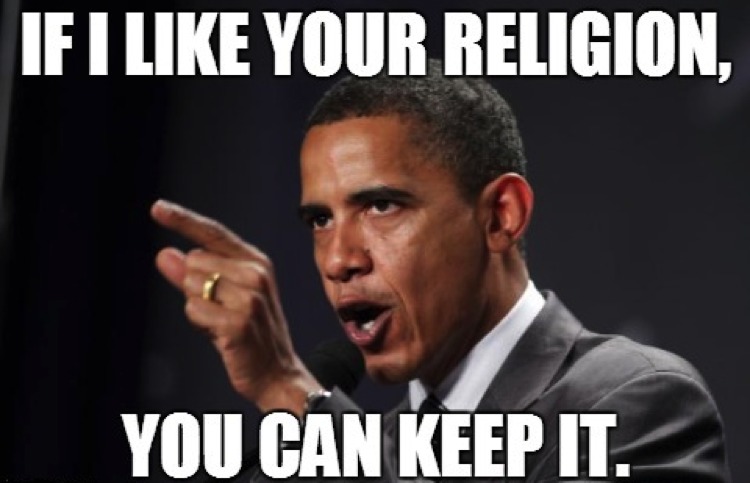 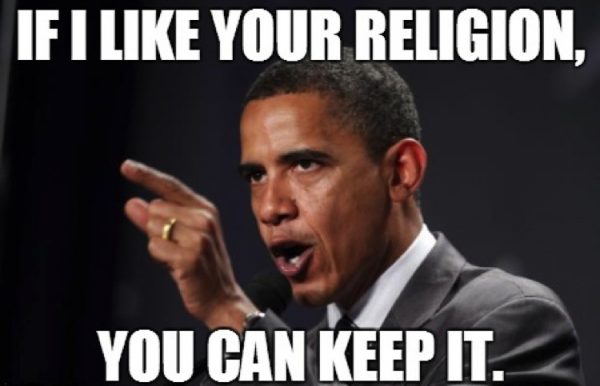 The mask is off. All pretense has been dropped, and the anti-Christian left’s boundless depth of hatred for individual liberty, our First Amendment and the Religious Freedom Restoration Act (RFRA) is now on full display.

I wrote last week about the Supreme Court’s recent Hobby Lobby opinion, a rather tepid acknowledgement of every American’s non-negotiable right to religious free exercise (yes, that includes Christian business owners). I observed, among other things, that “the secularist left’s utter meltdown over having but a small measure of control over others wrested away is highly instructive.”

The meltdown continues. This week brings two new developments: 1) Democrats in Congress are readying a legislative “Hobby Lobby fix” that stands exactly zero chance of passing and would be struck down as unconstitutional even if it did, and 2) The ACLU, AFL-CIO, National Gay and Lesbian Task Force, Lambda Legal and a hodgepodge of other left-wing extremist groups have withdrawn support for the ironically tagged “Employment Non-Discrimination Act,” the crown jewel of homofascism, because the bill’s paper-thin “religious exemption” does not adequately outlaw the practice of Christianity.

Addressing the high court’s Hobby Lobby decision on Tuesday, Senate Majority Leader Harry Reid, D-Nev., fumed, “We have so much to do this month, but the one thing we’re going to do during this work period – sooner rather than later – is to ensure that women’s lives are not determined by virtue of five white men.”

To which Justice Clarence Thomas replied, “Say what, honkey?”

“This Hobby Lobby decision is outrageous,” continued Reid, “and we’re going to do something about it.”

Well, “do something about it” they shall try. TalkingPointsMemo.com reported on legislation Democrats introduced Thursday that would do away with religious liberty protections altogether:

“The legislation will be sponsored by Sens. Patty Murray, D-Wash., and Mark Udall, D-Colo. According to a summary reviewed by TPM, it prohibits employers from refusing to provide health services, including contraception [and abortion pills], to their employees if required by federal law. It clarifies that the Religious Freedom Restoration Act, the basis for the Supreme Court’s ruling against the mandate, and all other federal laws don’t permit businesses to opt out of the Obamacare requirement.

“The legislation also puts the kibosh on legal challenges by religious nonprofits, like Wheaton College, instead declaring that the accommodation they’re provided under the law [there is none] is sufficient to respect their religious liberties.”

This reactionary response to the Hobby Lobby ruling is, of course, little more than an election year fundraising scheme for the Democratic National Committee.

The Washington Post reports, “Several major gay rights groups withdrew support Tuesday for the Employment Non-Discrimination Act that would bolster gay and transgender rights in the workplace, saying they fear that broad religious exemptions included in the current bill might compel private companies to begin citing objections similar to those that prevailed in a U.S. Supreme Court case last week. …

“But the groups said they can no longer back ENDA as currently written in light of the Supreme Court’s decision last week to strike down a key part of President Obama’s health-care law. The court ruled that family-owned businesses do not have to offer their employees contraceptive coverage that conflicts with the owners’ religious beliefs,” concluded the Post.

Gary Glenn is a candidate for the Michigan State House. He’s also president of AFA Michigan. Glenn has been a national leader in defense of religious liberty for well upon two decades. In an email, Glenn wrote, “The extremely limited religious exemptions typically included in discriminatory homosexual and cross-dressing ‘rights’ laws have always been mere window-dressing with no real protection or effect, as witnessed by the ongoing persecution and discrimination under such laws against Christian business owners and community organizations such as the Boy Scouts, Catholic Charities, Salvation Army, and even the United Way.

“But now that the U.S. Supreme Court’s Hobby Lobby decision threatens to give real teeth to such exemptions, the AFL-CIO’s in-house homosexual activist group has announced it will no longer support discriminatory ‘sexual orientation’ legislation that includes even limited exemptions for religious institutions.

“If this zero tolerance stance spreads to larger groups such as the Human Rights Campaign and National Gay and Lesbian Task Force [it now has], this could become the sticking point which hamstrings future attempts to pass federal, state, and local homosexual ‘rights’ legislation. These supposed religious exemptions, which the AFL-CIO’s homosexual lobby at least now says it will no longer support, have been a key propaganda point in blunting the opposition of churches and citizens concerned about the obvious threat such laws pose to religious freedom.”

According to its leftist proponents, ENDA would merely insulate people who choose to engage in homosexual conduct (sexual orientation) or those who suffer from gender confusion (gender identity) against employment intolerance. In truth, however, this legislation effectively would codify the very thing it purports to combat: workplace discrimination.

Though in its current form ENDA contains an extremely weak religious exemption that might – and I mean might – partially protect some churches and religious organizations (until they’re sued by sodomite activists), this so-called exemption would leave most others, such as Bible bookstores and many Christian schools and para-church organizations, entirely unprotected. It would additionally crush individual business owners’ guaranteed First Amendment rights.

Any “religious exemption” is meaningless. Last year Harry Reid promised homosexual pressure groups that Democrats would remove all protections for Christians and other people of faith on the flipside – after ENDA passed. The homosexual news site Washington Blade reported that homosexual activist Derek Washington of “GetEqual” confirmed Reid’s promise. In a conference call with homosexual activists, Washington admitted that Reid vowed, as goes any religious exemption, “the main thing to do was get the vote taken care of, and then deal with it later. As oftentimes happens, you don’t get something perfect the first time around, you go back and fix it later, so that was basically his take on it.”

According to the Blade, “That account was corroborated by Faiz Shakir, a Reid spokesperson, who said the Democratic leader understands the concerns, but wants to get the bill passed first, then go back and address the exemptions.”

They’ve stopped pretending, folks. This is about criminalizing Christianity. The Hobby Lobby decision has merely made secular liberals forget themselves momentarily. It’s blown back the propagandist curtain to expose their truly sinister aims. Hobby Lobby hasn’t put the “culture war” to rest. It’s taken a gavel to the “progressive” hornets’ nest.

Break out the popcorn and Jujubes. It’s about to get interesting.

Matt Barber is founder and editor-in chief of BarbWire.com. He is an author, columnist, cultural analyst and an attorney concentrating in constitutional law. Having retired as an undefeated heavyweight professional boxer, Matt has taken his fight from the ring to the culture war. (Follow Matt on Twitter: @jmattbarber).

BIDEN ON CNN: Mask Mandate For 100 Days; Only Trusts A Fauci-Approved Vaccine; Might Fake An Illness And Resign
December 4th, 2020 Clash Daily