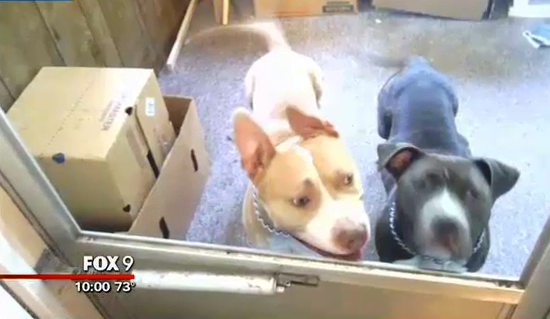 A Minnesota family is trying to understand why a SWAT team killed their beloved pets during a no-knock raid earlier this week.

At approximately 7:00 a.m. on Wednesday, July 9th, the home of Camille Perry and Larry Lee Arman was breached with a battering ram, and strange men charged in with rifles and opened fire on their pets.

Mr. Arman, owner of a towing business, says he was laying asleep when he heard the front door breached and then the gunfire.

“I was laying right here, and I really thought I was being murdered,” Mr. Arman recalled.

Perry, who is eight months pregnant, said she was getting ready for work when the raid occurred. She ran to protect the couple’s young sons, ages 4 and 7, who were sleeping on a mattress with Arman:

“The only thing I was thinking was my kids were going to get hit by bullets.”

“The gunshots scared the living daylights out of me, and knowing that they were in such close range of the dog and where we were laying with my kids made it worse. Our oldest dog actually ran back to protect us in front of the bed and they kept shooting her, even though we were laying right there.

“The whole time all I could scream was, ‘Stop shooting, stop shooting!’ ” Perry told PioneerPress.

The family’s two dogs, Mellow and Laylo, were killed:

Blood was splattered all over the living room, staining the carpet and a pair of shoes.

“One was running for her life, and they murdered her right here,” Mr. Arman said.

To add insult to injury, the officers destroyed the family’s home as well:

Officers proceeded to tear the house apart for hours. The extensive damages included multiple broken doors, broken door frames, and walls with the insulation and vents ripped out.  All damages were left to the homeowner to cover.

Perry and Arman said the warrant, which was obtained by Minneapolis police, indicated police were looking for marijuana, drug packaging, weighing equipment, guns, computers and more. The warrant mentioned Arman, but not Perry.

The net of that raid?

Police took only a water pipe, a grinder that may have had marijuana residue and some clothes, according to Arman. According to Minnesota law, small amounts of marijuana are considered petty misdemeanors, and are punished with at $200 fine.

No one was arrested.

Arman said he smokes marijuana recreationally but doesn’t sell it:

The raid was unnecessary, say Perry and Arman, who told PioneerPress that they would have willingly let the police into their home to search:

“I don’t have anything to hide,” Perry said, referring to herself and Arman as hard-working homeowners.

Nicole Miller, a neighbor, said that after the incident, Arman and Perry’s 4-year-old son asked her, “Did you see all the soldiers?” referring to the SWAT officers.

Miller also said that Laylo and Mellow were good dogs:

“I would sit out here every morning and have my coffee, and Mellow and Laylo would run up and show me so much love. They wouldn’t hurt a fly; they’d lick you to death.”

Shawn Miller, another neighbor, was also disturbed by the incident:

“All of a sudden, we see the dogs thrown out like pieces of meat, like they were nothing. We teared up because they are like family to us. Those dogs are real good dogs.”

Naturally, the officers who shot the dogs claim they felt threatened by the family pets:

A St. Paul police spokesman told Fox 9 News that the dogs charged at officers, and that they feared for their safety. The spokesman also explained that law enforcement has the right to eliminate potential threats with lethal force, and he pointed out that a judge signed off on the search for weapons and drugs and that investigators believed they were entering a dangerous situation. Arman says that couldn’t be further from the case.

One can’t help but wonder exactly how the officers expected the dogs to behave. Arman said the dogs were sleeping by the front door when the thugs used a ram to break down the door to their home. He said the dogs did nothing more than bark.

The couple believes they were targeted because of Arman’s past. He does have a criminal record, but it dates back over a decade.  They told PioneerPress that they also wonder if the business they started earlier this year, Arman Topkick Towing, drew police attention because it has people coming and going from their home:

“I just believe they didn’t investigate enough,” Perry said of the police. “If you want to investigate, investigate. Take pictures, get recordings, catch us doing something. You can’t assume just because we have assets that we’ve got them from selling drugs. We’re business owners, and we work hard.”

The couple has hired an attorney and said they are planning to sue the police.

Two dead pets, a traumatized family, and a destroyed home…all for possession of a tiny amount of a drug that is increasingly becoming legalized in the United States.