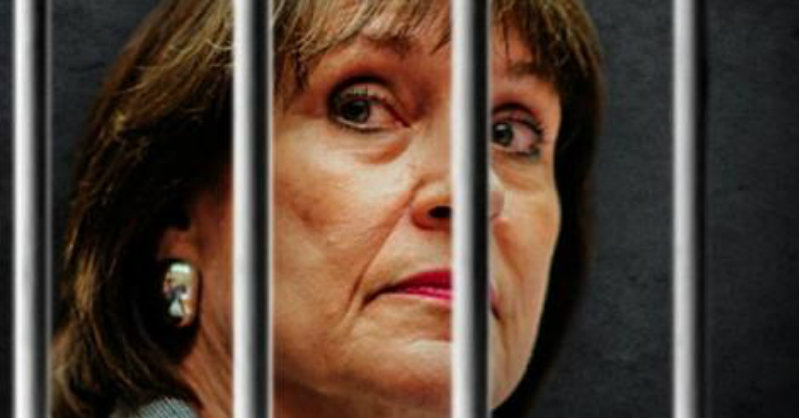 Based on a 2009 article that appeared in the Washington Post and a March 2013 report by CNN, Rep. Steve Stockman (R-TX) – who authored a resolution calling for the Sergeant at Arms to arrest Lois Lerner for contempt of Congress – should perhaps point to a much more significant crime in response to any concerns that Lerner could become a sympathetic figure if she were arrested. That crime involves Lerner’s alleged illegal backdating of a tax exempt approval letter for an organization whose founder does business with a State Sponsor of Terrorism, business the Post says is illegal.

Here is what the Washington Post’s Dan Eggen wrote nearly five years ago:

U.S. legal requirements… mandate disclosure of work for foreign governments and which prohibit doing business with Sudan under sanctions first imposed in the 1990s.

…Sudan, which has been under strict U.S. government sanctions and a trade embargo for nearly 20 years for supporting terrorism and violating human rights.

As Shoebat.com has demonstrated for over a year now, Malik Obama – the brother of the President of the United States – has been “doing business with Sudan” since at least 2010, a year prior to when Lerner granted him tax exempt status.

Stockman was interviewed by Megyn Kelly about his resolution and one of the counterarguments raised by Kelly was that if the Sergeant at Arms is ordered to arrest Lerner, Republicans risk making Lerner a sympathetic figure. Stockman, whom we believe is well aware of the Malik Obama angle to the scandal (based on his trips to Egypt earlier this year), didn’t seem concerned with Lerner garnering sympathy during his interview:

As to the subject of the 2009 Post article, it was former Reagan National Security Advisor Robert “Bud” McFarlane. Last year, McFarlane’s Watergate apartment was raided by the FBI and in affidavit, agent Graydon Ridd wrote the following, according to CNN:

“I believe these e-mails are evidence that McFarlane was entering into an agreement with the Government of Sudan to lobby the U.S. government officials on behalf of Sudan and to provide it with advice during negotiations with the United States.”

The U.K. Daily Mail quoted Ridd as further stating that emails obtained in the raid provide further evidence that McFarlane and a Sudanese intelligence operative were attempting…

“…to hide McFarlane’s relationship with Sudan by construing the agreement to make it appear that his contractual relationship was with Qatar, when in fact it was not.”

How does all of this involve Lerner?

Simple. The admission by the Washington Post and CNN that dealing with Sudan is illegal for Americans to do, coupled with McFarlane’s alleged attempt to mask said dealings by contracting with Qatar, means that Malik Obama’s dealings with Sudan are much easier to demonstrate as being illegal. Ditto for Lerner being an accessory.

In fact, McFarlane’s alleged attempt at masking the deal could make the case against Lerner and Malik even stronger.

McFarlane’s case appears to have gone cold since Malik’s connections to Sudan were discovered in May of 2013 by Shoebat.com. In fact, he’s writing unrelated Op-eds for the Wall Street Journal and as Shoebat.comreported, even recently attended an event hosted by an organization whose Vice President is a former henchman for the Sudanese government – Abubaker Y. Ahmed Al Shingieti.

The alleged pseudo-deal with Qatar to mask dealings with Sudan netted McFarlane a $1.3 million contract.

The Post article said that McFarlane was “close to the edge of U.S. legal requirements” in his deal with Qatar potentially a cover for an actual deal with Sudan. If McFarlane is “close to the edge”, Malik Obama and Lois Lerner are over the edge. Malik for dealing with Sudan and Lerner for not only illegally letting him do it but by violating a separate law in the process.

According to the CNN report, one of the items on McFarlane’s agenda was to get Sudan off the State Sponsors of Terrorism list, quite potentially on behalf of the Obama administration, which has been seeking the same thing as reported by Shoebat.com.

In his interview with Kelly – who played the role of devil’s advocate – Stockman responded to a question about allowing the process involving the Justice Department to work by rightly pointing out that Attorney General Eric Holder has been found in contempt of Congress too. In fact, the U.S. Attorney responsible for prosecuting Holder is actually Holder’s subordinate and refused to do his job.

The notion that Lerner would be a sympathetic figure is on par with Republicans being afraid of their own shadow. Here is a woman who has for years represented a body – the IRS – that targets and bullies Americans with great regularity.

Moreover, no politician of consequence is going for the jugular in this scandal.

In April, she was.

*Ben Barack contributed to this report