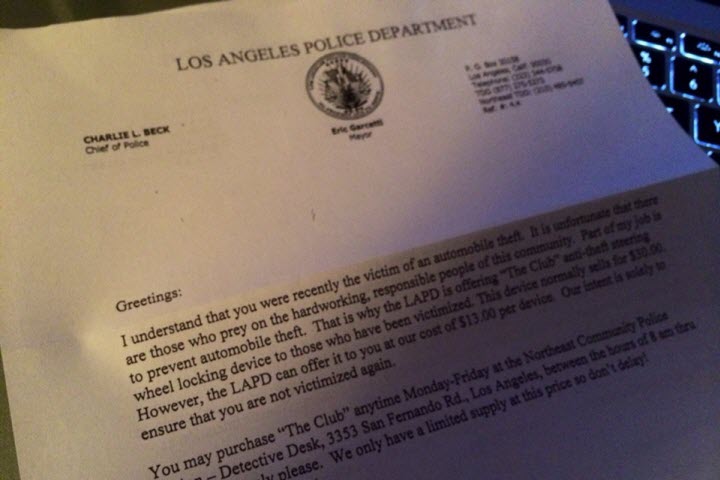 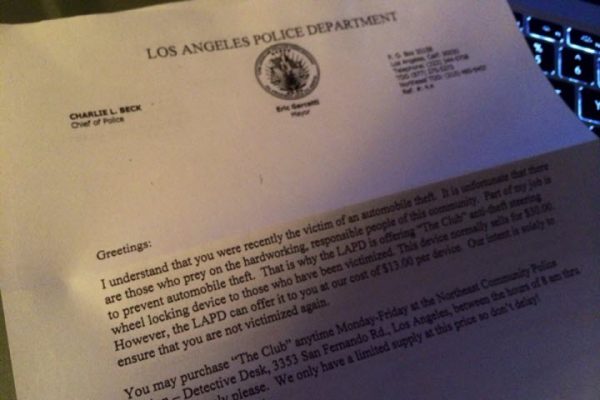 David Bridson ran into a bit of bad luck last June when his car was stolen.

Not only did the thieves get his car, they also made off with his laptop and iPad.

But Bridson didn’t fret, after all with just a quick call, he’d have LAPD on the case.

A few days later, according to his Facebook page, Bridson had a major breakthrough in the case. “Anyone near XXXX south central ave? You could pick up my stolen iPad for me,” he posted on his wall. He’d been able to locate his stolen iPad using the iCloud’s locator function.

“I called the [police] station at 3:45,” David wrote. The response: “All the auto detectives have gone home for the day. I’ll give them the message and see if they want to do anything.”

14 hours and no response later, David had to call back himself, and got the response: “So, the auto detective unit for LA says, ‘Yeah, sometimes we follow up on that if we have the personnel, but four of my detectives are on vacation, so I only have two and one is brand new. Sorry can’t help you.’”

Just to make this clear, Bridson had the GPS location of his stolen iPad, that was obtained from his stolen car and all the LAPD had to do was send a unit to the house; like fishing in a bucket!

No action was taken by the LAPD.

Days later Bridson gets a letter in the mail from Chief Charles Beck himself.

The letter read, “Part of my job is to prevent automobile theft.” wrote Chief Beck. “That is why the LAPD is offering ‘The CLUB’ anti-theft steering wheel locking device to those who have been victimized. This device normally costs $30. However, the LAPD can offer it to you at our cost of $13 per device.”

You cannot make this absurdity up!

So instead of actually solving a cut and dry case in which the LAPD had the actual location of stolen goods, they ignored it.

Instead of solving a crime the LAPD would rather peddle 2 decades old technology for a profit!

Silly citizen, the LAPD is there to bust evil marijuana users, and vile travelers  who’d dare to drive without a seat belt! They have no time actual crime!

That’s because stopping actual crime requires real work, and doesn’t pay nearly as much as road piracy and drug busts.

Matt Agorist’s post is courtesy of The Free Thought Project.