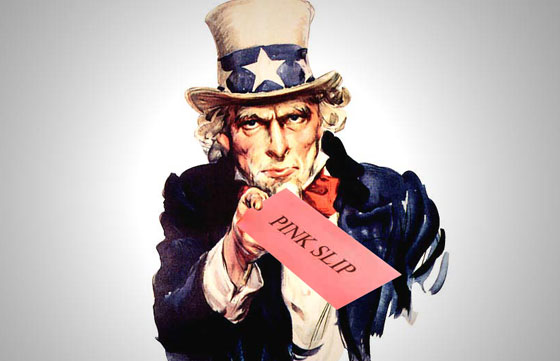 While many Americans who were too busy to pay attention are floored by our nation’s apparent lack of border security and are somehow still under the impression this is a “sudden” massive influx of illegal immigrants that isn’t the result of years of NAFTA, CAFTA and every president’s foreign policy failures going back to at least Reagan — including the seemingly persistent, systematic destruction of our immigration laws by the Obama Administration (regime?) — our government is also busy embroiled in endless wars they can’t win halfway around the world.

Now, supposedly due to sequestration budget cuts, our Pentagon is busy dolling out thousands of pink slips to our soldiers, including some who are active duty members fighting overseas in Afghanistan:

Roughly 2,600 captains and other officers have or will be laid off, with more expected, Fox News learned Friday.

“It puts the soldier, the soldier’s family and the men under his command at risk,” said Scales, a Fox News contributor. “Young officers look at each other and wonder who is next.” (source)

So, while these troops are over there battling a nebulous enemy under the outright lies that got our nation overextended in this never ending empire-building war economy masquerading as a “War on Terror,” these men and women are simultaneously being given pink slips that effectively leave them unemployed with no job and no way to support their families when they do get back home.

How’s that for “Support our Troops” — a big fat thank you straight from Uncle Sam.

Psychiatrists are now projecting that one in three U.S. troops will suffer post-traumatic stress disorder. Our soldiers are committing suicide in record numbers, and record numbers of them are taking prescription antidepressants. Back in 2010, Army Times reported that an average of 950 veterans who were receiving treatment through the Veterans Affairs Dept. were attempting suicide each month.

Not that I’m in favor of the giant military-industrial complex America has built to infect the world like a cancer, but laying off people while they not only have a loaded gun, but the life or lives of other men and women, literally in their hands seems particularly mind-blowing.

But somehow we the people are supposed to believe we magically have enough money for Obama to ask Congress for a spare $3.7 billion to help take care of illegal immigrants and suddenly pretend to care about securing our somehow still completely unsecured southern border.