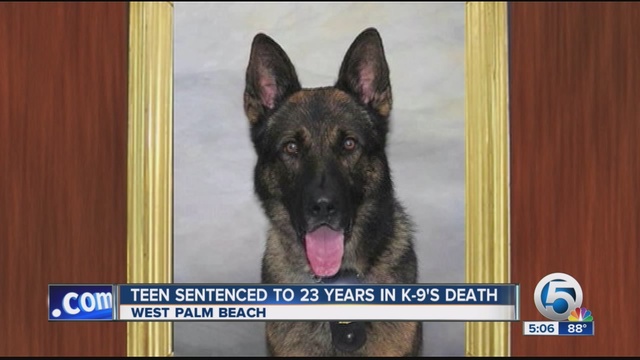 It should not surprise you that the police in 2014 get away with slaughtering many household dogs, receiving paid administrative leave instead of prison sentences.

In one of the most recent cases, an officer shot a dog that could in no way injure the cop, because there was a car window in between the cop and the dog. The cop killed the dog by shooting through the car window.

It is estimated that hundreds is not thousands of dogs are shot and killed by police every year in the US.

There is of course no ‘official’ statistic because officials don’t quite care for statistics that prove the system to be immoral, and there are no advocacy groups that represent pets against police aggression.

Recently, a 17 yr old boy from Florida was sentenced to 23 years, a huge portion life behind bars for shooting a police dog. Correction – a retired police dog. He was only 16 years old at the time of the crime.

In this particular situation however, the 17 yr old had allegedly committed a burglary on a state trooper’s house, and he shot his dog inside the house. There is nothing morally okay about that in any way, but to send him to prison for a huge part of his young life, and seek no rehabilitation, is gross and immoral, and that is the very reason the US has the highest amount and rate of citizens incarcerated of any nation or empire in the history of the world.

To again sum it up, this is how the system works: if a cop  –a guy with a badge– shoots an innocent man’s dog for no reason at all, even if the dog poses zero threat to anyone, 99% of the time he gets a paid vacation (administrative leave) and nothing more.

When a juvenile criminal committing petty crimes kills a dog that was formerly used by police to lock people in cages, he is basically charged with killing a police officer.

Please share this with absolutely as many people as possible; especially if they love animals or don’t understand that hundreds, possibly thousands of dogs are shot and killed by cops every year with near-zero consequence.

Cassius Methyl’s article is courtesy of The Anti Media.

Editor’s note: It is not entirely accurate that the entire 23 year sentence was for the killing of the dog. There was a burglary involved. However, it would appear that the dog’s death was the major contributor to the sentencing. Read these two sources and you will see that it was mostly about the dog and less about the burglary, or at least it was in the eyes of these media sources: