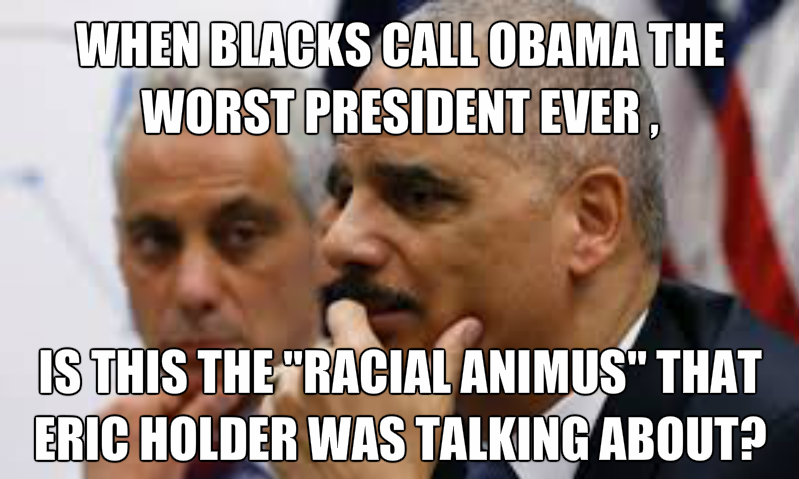 When your own voter base turns on you and lambastes you as “the worst President ever elected,”, it probably means you’ve made a significant miscalculation in the political landscape.

Is this, as Eric Holder recently called it, the manifestation of African Americans’ “racial animus”?

Barack Obama is, after all, half white, so these people protesting in the middle of Chicago must be doing so for racial reasons.

“Mr. President, we’re asking for you,” one woman said. “You’re spending billions of dollars in Texas, but we’ve a problem here in Chicago. We will not stand by this here, and keep letting this senseless killing and shooting happen in our community.”

Another resident said, “Today, if you look at the time that we were brought here as slaves 400 years ago, we got the same results today.”

One man called for Mr. Obama to step down if he continued to shun the city’s problems.

This is the video you won’t find on most ‘progressive’ web sites because it will blow the race-card narrative out of the water. As it turn out, it’s not just a bunch of white people out there criticizing President Barack Obama.

It should be clear that some issues transcend political lines and this is one of them:

Is criticizing Barack Obama really an issue of racial animus?

Or, is it possible that all Americans, regardless of race, are fed up with policies that continue to destroy our way of life?

Millions of jobs have been lost, yet the flood gates on the southern border have been opened, driving hundreds of thousands of more people into a job market that has been hammered for nearly a decade.

Moreover, as residents of Detroit are unable to pay their water bills, rather than focusing taxpayer dollars to help poverty-stricken Americans, the democrat-leaning US Congress wants to dedicate $3.7 billion to immigration reform that will do absolutely nothing to actually secure the border.

In Chicago, where the landscape is starting to mirror that of the drug cartel controlled city streets of Mexico, residents are fed up with a total lack of law enforcement. And what does the administration do? They let known gang members from criminal organization like MS-13 come freely into the United States. That should do wonders for the national murder and violent crime rates in coming months and years.

The policies of this administration and the stand-down orders given to Immigration and Customs Enforcement agents along our southern border beg the question: What the hell is really going on here?