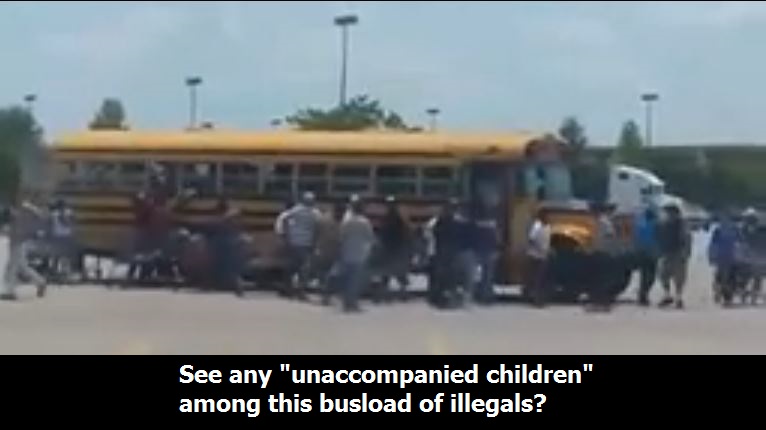 If we were to listen only to the mainstream media and the talking points from the White House, they would have us believe that not only is the government doing everything possible in order to stop the invasion of our Southern border, but those who are crossing are refugee children who can’t be turned away. However, a video that was recorded on Sunday by a North Carolina woman places serious doubts on whether or not either of those things are true, as it allegedly shows busloads of adult illegal immigrants getting dropped off at a local Walmart to shop for supplies for their shelter.

Sylvia Locklear was on her lunch break Sunday afternoon around 1:30 p.m. when she noticed something strange happening in the parking lot of Walmart in Concord, NC – there were busloads of what appeared to be adult illegal immigrants being dropped off to shop for everything from food to pillows and blankets. Angered by her discovery, Sylvia decided she was going to investigate a little further, and what she found should outrage every American citizen.

In the video above, Sylvia can be heard talking to another person who presumably was curious about what was going on, so she explained to them that prior to taking the video she had tried to talk to the people on the bus. Not only could they barely speak English, but one of them had said they had just arrived in America.

We all know that this has been happening, however, the sheriff of her town had said that they weren’t allowing any illegals to be shipped in, so it would appear as if the Obama regime is once again placing undue burdens on the states and not even letting them know what’s going on. What’s worse is that in the comments under the video she posted to Facebook, Sylvia said that when she was in line behind them that they were using government-issued EBT cards to pay for their purchases.

The Kannapolis Police Department wouldn’t comment on the video when I reached out to them, and the sheriff couldn’t be reached for comment. However, there’s been many reports of illegals being shipped to towns without the knowledge of town officials as Judge Jeanine points out below.

How come you and I not only pay for our purchases at Wal-mart, but those of people who violate our borders and our laws?