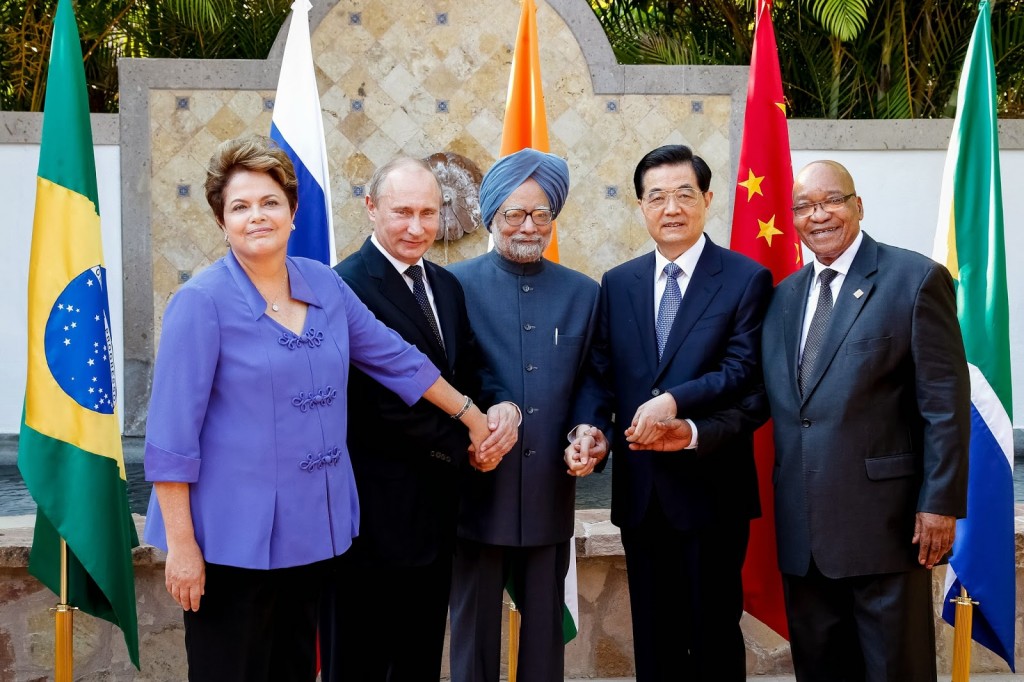 Five countries are tired of US dominance of the global financial system and are building their own versions of the World Bank and the International Monetary Fund (IMF).

The group is called BRICS, and the members are all developing or newly industrialized countries that are distinguished by their large, fast-growing economies and significant influence on regional and global affairs.

At a summit Tuesday through Thursday in Brazil, the five countries will unveil a $100 billion fund to fight financial crises, their version of the IMF. They will also launch a World Bank alternative, a new bank that will make loans for infrastructure projects across the developing world.

The five countries will invest equally in the lender, tentatively called the New Development Bank. Other countries may join later.

The BRICS powers are still jousting over the location of the bank’s headquarters – Shanghai, Moscow, New Delhi or Johannesburg. The headquarters skirmish is part of a larger struggle to keep China, the world’s second-biggest economy, from dominating the new bank the way the United States has dominated the World Bank.

The BRICS grouping’s first formal summit was held in Yekaterinburg in June 2009. Afterward, the nations announced the need for a new global reserve currency, which would have to be “diversified, stable and predictable.” While they did not directly address the perceived “dominance” of the US dollar – something that Russia has done in the past –  the statement did spark a drop in the value of the dollar against other major currencies.

On Tuesday, the group’s 6th summit began in Brazil. On the agenda: the creation of a $100 billion development bank and a $100 billion dollar reserve fund, designed to boost investment in BRICS economies and reduce the power of the Western-dominated World Bank and IMF.

Thomas Wright, a fellow at Brookings’ Project on International Order and Strategy, told the AP that the BRICS countries “want a safety net if they fall out with the West.”

Congress has refused to approve legislation to provide extra money to help the IMF provide more loans to troubled countries. The most recent conflict between the BRICS countries and the US was at the spring meeting of the International Monetary Fund in Washington in April when an agreed reform of the IMF failed because of a veto by Congress.

That veto caused an increase in strained relations between Brazil, and the US, reports DW:

Growing trade among emerging markets resulted in China replacing the US as the primary buyer of Brazilian products in 2009. Since 2012, the Chinese have also been Brazil’s most important import partner.

When the World Bank or IMF lends money, strings are usually attached – strings which reflect the values and interests of the US and its allies.

The BRICS countries are seeking to free themselves from that US dominance, and want to have more influence in global economic policy. They now account for 21 percent of global economic output and have contributed more than 50 percent of world economic growth in the past decade, reports Aljazeera.

As of 2013, the five BRICS countries represent almost 3 billion people with a combined nominal GDP of US$16.039 trillion and an estimated US$4 trillion in combined foreign reserves.

Russia will attempt to persuade other BRICS emerging market nations to agree to measures to prevent “sanction attacks” by the US to “harass” countries opposing its policies, President Vladimir Putin told The Moscow Times:

Putin said he would urge Brazil, China, India and South Africa to draw “substantive conclusions” from sanctions imposed on Russia over its actions in the Ukraine crisis, and said it was time to dilute the dominance of the U.S.-led West and the U.S. dollar by boosting the role of the BRICS on the global stage.

“Recently Russia has been exposed to a sanction attack by the U.S. and its allies,” Putin told the ITAR-Tass news agency.

“Together we should think about a system of measures that would help prevent the harassment of countries that do not agree with some foreign policy decisions made by the U.S. and their allies, but would promote a civilized dialogue on all points at issue based on mutual respect.”

“The international monetary system … depends a lot on the U.S. dollar, or, to be precise, on the monetary and financial policy of the U.S. authorities. The BRICS countries want to change this,” he said.

The BRICS countries also have suggested the impacts their system will have on the US dollar:

In July 2014, the Governor of the Russian Central Bank, Elvira Nabiullina, said that the “BRICS partners the establishment of a system of multilateral swaps that will allow to transfer resources to one or another country, if needed” in an article which concluded that “If the current trend continues, soon the dollar will be abandoned by most of the significant global economies and it will be kicked out of the global trade finance. Washington’s bullying will make even former American allies choose the anti-dollar alliance instead of the existing dollar-based monetary system.” (source)

BRICS headquarters will likely be in Shanghai, China. President Xi Jinping said the country will dedicate itself to “perfecting” the role developing countries play in international affairs to give them better representation and a greater say, Reuters reports:

Xi, in an interview with South American media released by China’s Foreign Ministry, said China would try to better play the role of a responsible major power and promote the rights of the developing world.

“We will … dedicate ourselves to perfecting the international system of governance and proactively push for expanding the representation and right to speak for developing countries in international affairs,” he said.

“We will come up with more Chinese proposals and contribute China’s wisdom,” Xi added, without elaborating.

James Rickards, author of Currency Wars, told RIA Novosti that the summit of major emerging “BRICS” economies in Brazil is the latest sign of the decline of the US dollar as the standard global currency for reserves and trading:

“We see the BRICS’ desire to shift away from the dollar, a unified Eurozone with a sovereign bond market waiting in the wings and a requirement on the International Monetary Fund to re-liquefy the world when the next financial crisis hits.

“Put all that together and you see that the dollar’s days are numbered,” he added.

“BRICS share one common goal in that they have all voiced objections to the dollar as the principal reserve currency and the impact of US Federal Reserve policy on emerging markets, which the Fed pays very little attention to.

“By shifting its policies, the Fed massively affects foreign currencies and makes it difficult for them to plan investments. BRICS members share a desire to end dollar hegemony. It’s easier said than done, but they’re trying,” concluded the analyst.

The US economy is already teetering on disaster. Will this push it over that edge?

And does BRICS represent a new New World Order – one that is shutting the US and its superpower allies out?