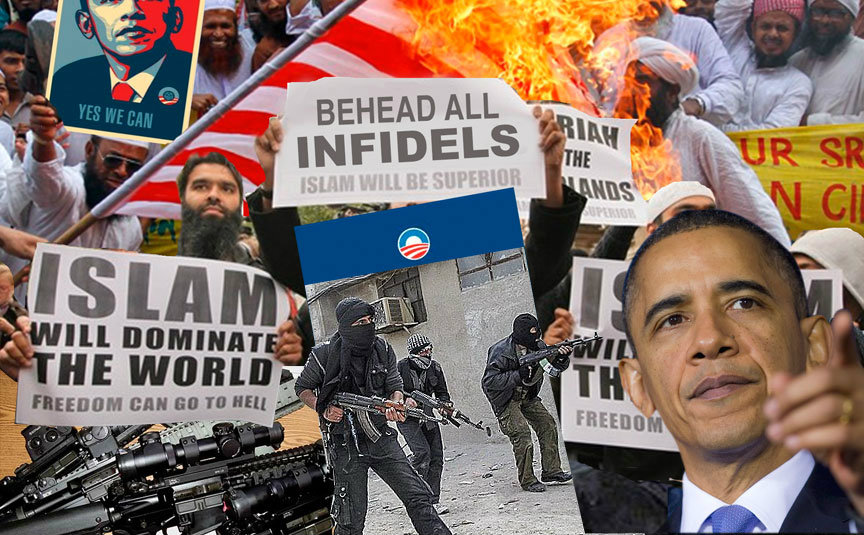 Obama wants to disarm American Christians, while he gives arms to Muslims to slaughter Christians in the Middle East.

If Christians have no arms, they are left to the slaughter, an open field ready to be tilled and plunged into the harrowing depths of the earth.

A Christian from Iraq, named Joseph Kassab, a medical researcher at the University of Baghdad who fled persecution and now resides in the United States, had this very revealing truth to say in regards to the helplessness of the Christians:

[The Christians] are the weakest of the weak because they don’t carry arms, they don’t form a militia, they don’t have a police force, and the government is too weak to protect them

This statement contains so much reality, and should ring in our ears the knowledge of tyranny’s nature. While Obama wants to seize the guns of the American conservatives, he is giving guns to the jihadists in the Middle East, who then use those same weapons to slaughter Christians. The elitist in the United States government want to make American Christians just as vulnerable as the Christians in the Middle East.

If the Christians in the Middle East could all collectively form a militia, the Muslims would not stand a chance against such a holy band of godly warriors.

In the words of holy warrior:

Let the saints be joyful in glory: let them sing aloud upon their beds.

Let the high praises of God be in their mouth, and a two-edged sword in their hand;

To execute vengeance upon the heathen, and punishments upon the people;

To bind their kings with chains, and their nobles with fetters of iron;

To execute upon them the judgment written: this honour have all his saints. Praise ye the Lord. (Psalm 149:5-9)

In 2013, I wrote an article entitled, Obama Wants To Disarm Americans But Arm Terrorists, and for the sake of whats happening in both America and to the Christians now, I will post it here…

Obama wants to decree a ban on all assault rifles and semi-automatic weapons, which would apply to rifles and pistols. On this ban, Obama stated clearly:

Yet, the Obama administration has been involved in providing weapons to rebels who have committed many atrocities throughout Syria. Why must Americans be disarmed and jihadists be given weapons to? Americans are simply observing a right, while the Islamists want guns to force Syria into becoming a Sharia governed state.

Leon Panetta, who is now retiring, and General Martin Dempsey, the principle military adviser of Obama, have both revealed that they supported a plan last year composed by Hillary Clinton and General Petraeus that would provide weapons to the Syrian rebels, who are all fighting for a jihadist cause.

“I urge the president to heed the advice of his former and current national security leaders and immediately take the necessary steps, along with our friends and allies, that could hasten the end of the conflict in Syria”

Though Obama is said to have turned down this plan, he still has supported the Syrian rebellion in a very covert and elusive manner. The current administration has instead used a middle-man: Saudi Arabia, to receive American weapons and then transfer them to the hands of the jihadists.

Michael Kelley of Business Insider reported last year that in

2011 the U.S. sold $33.4 billion worth of weapons to Saudi Arabia and $1.7 billion to Qatar as sales tripled to a record high and accounted for nearly 78 percent of all global arms sales.

And where did these weapons go to? Syria, where they were obtained by jihadists who would not hesitate for a second to behead any American, or any non-Muslim.

As one American official put it:

Though the U.S. is not directly sending arms to the revolutionists, it is providing support for shipping small arms such as rifles (which Obama wants to ban in the U.S.) and grenades, and therefore, is nevertheless directly supporting the rebels themselves.

So, to Obama Americans shouldn’t have rifles but Syrian rebels should? This dangerous distortion is just more evidence as to how supportive the current administration has been for the Islamists.

The American government actually expected an organized plan mapped out by the rebels that would show how Syria will be governed in the future. But they haven’t received any future plans, and the reason is that the rebels are using the Americans for the assistance but refuse to reveal their true intentions for a post-Assad Syria, since what they really desire is a Muslim Brotherhood ruled nation.

One Middle Eastern diplomat, who has worked extensively with the C.I.A., has said that there hasn’t been any report by the rebels as to how Syria will be ruled after Assad is removed. In his own words:

We haven’t seen anyone step up to take a leadership role for what happens after Assad, … There’s not much of anything that’s encouraging. We should have lowered our expectations

Syria is going down the road to become just another state of the future Sunni confederacy that is forming, alongside Egypt and Libya.

Obama said to NBC that

there are a vast majority of responsible gun owners out there who recognize that we can’t have a situation in which somebody with severe psychological problems is able to get the kind of high capacity weapons that this individual in Newtown obtained and gun down our kids.

Yet, his administration is helping ship rifles and grenades to Syria, and is working with the Saudis to provide arms to Islamic renegades who themselves have severe urges to commit some of the most vile violence caught on film.

In Syria right now, the most armed entity is the military, the second most equipped are the rebels, and the most defenseless are the civilians. In the midst of the fray, the civilians are the ones who suffer the most, since the Islamists have the weapons, and the military is unable to protect all places of the country at once.

Now, apply this to America. If a full weapons band was ever decreed, the military, the police, and the lawless would be the most armed, and American civilians helpless. Police and military personnel would not be able to protect the entire country, leaving the criminals many opportunities to pick out their victims.

Obama and the rest of his Leftist ilk keep promoting the idea that guns are the problem, while neglecting the roots of the issue at hand: violent ideologies. All murderers, be they jihadists or spree killers, reject the philosophical idea that life is sacred. Since the Left is not pro-life, they have refused to confront this issue all together, and so are now giving the way to terrorists. The assistance to terrorists in the Middle East will provide confidence for Islamists here in America. Just take a look at the news now. Just this month, a Muslim named Yusuf Ibrahim shot to death two Coptic Christians (Hanny F. Tawadros, 25, and Amgad A. Konds, 27), decapitated them, severed their hands, and buried them in a randomly picked yard. We’re going to be seeing more of this as Islam is allowed to rise and thrive on our insane obsession on tolerance.

As I write in my book, For God or For Tyranny, when the Third Reich reigned, Hitler and his minions established the Nazi Weapons Act of 1938, which prohibited German civilians from owning any firearms. The Left is doing the same thing, but in a ‘nicer,’ ‘gentler,’ more ‘sensitive’ and gradual way. Only those without prudence, foresight, and some historical knowledge on how tyrannies function, would believe that the Obama administration really wants to end crime and protect children (they are all pro-choice).

In our Declaration of Independence, one of the stated reasons for the American Revolution was that King George

excited domestic insurrections amongst us, and has endeavored to bring on the inhabitants of our frontiers, the merciless Indian savages, whose known rule of warfare, is undistinguished destruction of all ages, sexes and conditions.

If the Second Amendment is ever done away with, the only people that would be helped are the savages amongst us.