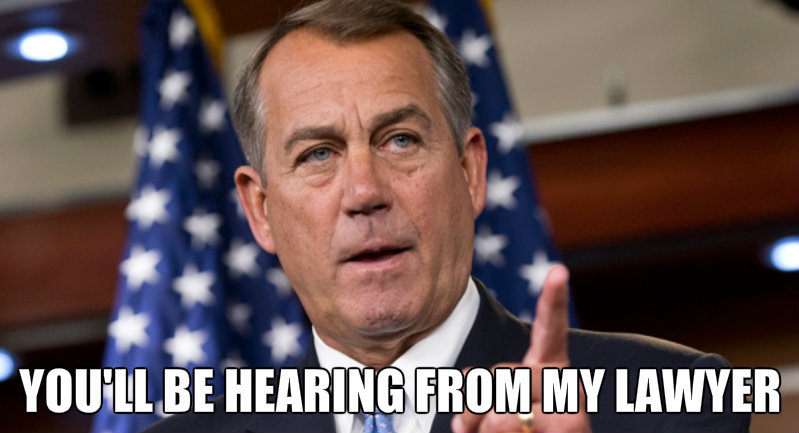 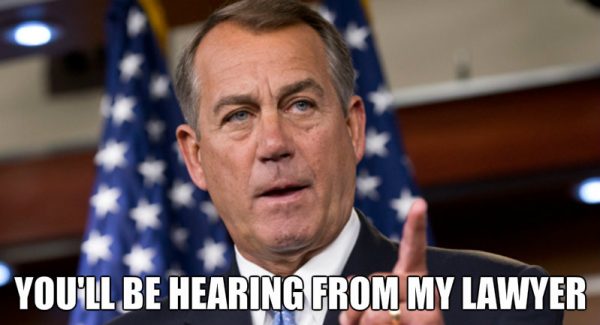 Most of us already know that House Speaker John Boehner does not have what it takes to stand against Barack Obama or his unconstitutional acts. It was most prevelant during the government shutdown. He wanted to be seen as a compromiser and think it would make Obama appear as the hardliner (that we all knew he was and is). However, Boehner over and over forgets it is the media that covers for Obama. Though Boehner has elected to file a lawsuit against Obama, at his weekly press briefing, he was unwilling to use the power of the purse, which the House has, in order to defund the unconstitutional acts of Barack Obama.

A reporter asked Boehner during the press briefing, “You’ve said you disagree with calls to impeach the president over abuse of power via executive actions. But under the Constitution the House actually has the power of the purse. So, if the President takes actions that exceed his Constitutional authority, will you withhold funding for those actions in the next must-pass appropriations bill?”

“There’s a lot of ways to deal with this issue,” Boehner responded. “But we’ve got a Republican House and we’ve got a Democratic Senate. And there are a lot of things we’ve passed here that the Senate clearly has not passed.

“Now, when it comes to that issue, some of these actions that you could defund, there clearly isn’t, I wouldn’t guess, an appetite in the United States Senate to withhold those funds,” Boehner said. “That’s why we’ve decided that the more direct approach of suing the president is the right path to go down here.

“Listen, I’m for upholding the Constitution,” he added, “and I’m for protecting the interest of the House vis-à-vis the power grab that’s going on by the White House. And while he has the authority to issue executive orders, he does not have the authority to unilaterally change laws in our country, which he has done.”

Now, our own Publius Huldah has demonstrated the power that Congress has in a previous article. Much of her focus was on Article one Section 8. However, Article 1, Section 9, Clause 7 states:

No Money shall be drawn from the Treasury, but in Consequence of Appropriations made by Law; and a regular Statement and Account of the Receipts and Expenditures of all public Money shall be published from time to time.

In other words, no federal monies can be spent unless there are appropriations made by law. So the House presents a spending bill, the Senate passes it and the Executive signs it into law before it can be spent lawfully.

If you recall, last year, during the government shutdown, Boehner and company tried to pass a Continuing Resolution that funded everything for the federal government, including a ton of unconstitutional stuff, except for Obamacare. The Senate rejected it and Obama said that if it came to his desk he wouldn’t sign it.

So, what did Boehner and company do? They dragged on for over two weeks, continuing to chip away at their own proposals. They were the ones compromising, and then ending up with egg on their faces. Obama and Senate Majority Leader Harry Reid didn’t give an inch. In fact, House Republicans gave up their leverage by paying non-essential personnel that had to be relieved of work, basically paying them for nothing. They felt the political pressure to cave, and cave they did, just like I said they would.

These elected officials were not concerned with your pocketbooks my fellow Americans. They were concerned with how bad they might look. They always are. They have demonstrated it time and again, whether in the government shutdown fiasco, the fiscal cliff debacle or the promotion of a liberal candidate for president. No concern was for the American people or the Constitution. It was only for themselves.

As Suzanne Hamner has so faithfully pointed out, the Constitution does not provide for the House of Representatives to sue the President when he is overstepping his Constitutional bounds. It allows for impeachment, but Boehner is unwilling to go that route because again, he is more concerned with how he will look than what he should rightly do.

So why won’t Boehner apply the power of the purse to defunding Obama’s unconstitutional agenda? It’s because this is about him, not what is right or wrong. Boehner knows what the right thing to do is, he is just unwilling to do it and the reason is because it would make his job too hard… at least those were his words in taking a stand on issues.

Friends, a lawsuit is a joke, and it’s not only a joke, but it’s a joke at our expense. Who will be paying for that lawsuit that isn’t outlined in the Constitution? That’s right, law abiding, hard working, American taxpayers.

Keep that in mind when you hear Boehner’s words of “I’m for upholding the Constitution,” and then follows them by stating that Obama “does not have the authority to unilaterally change laws in our country.” My question is, oh yeah? And who is going to stop him Johnny? Your lawsuit isn’t going to do it. After all, Obama has the power to pardon himself since you won’t impeach him. You aren’t going to defund anything, and you have rejected the Constitutional remedy for dealing with a lawless president, impeachment. From all appearances, it looks like he does have that authority (I know he doesn’t), at least under lawless, spineless politicians who are more concerned with their seats of power than the law.