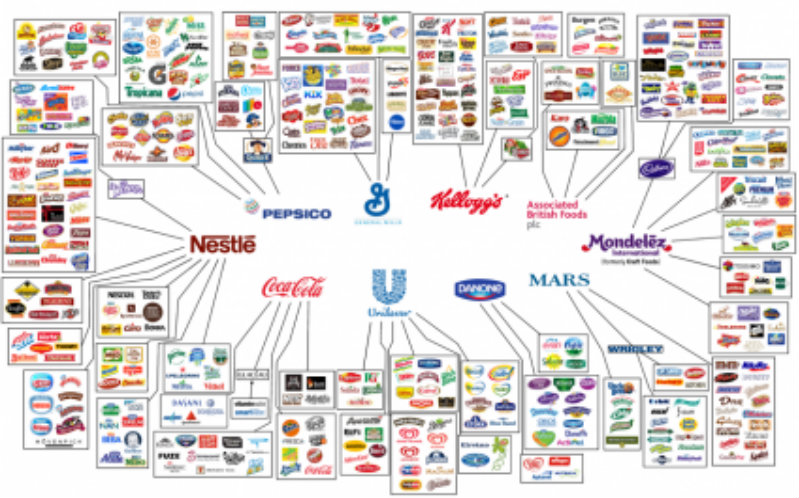 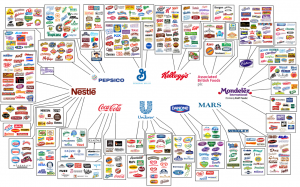 From our fields to our forks, huge corporations have an overwhelming amount of power over our food supply every step of the way.  Right now there are more than 313 million people living in the United States, and the job of feeding all of those people is almost entirely in the hands of just a few dozen monolithic companies.  If you do not like how our food is produced or you don’t believe that it is healthy enough, it isn’t very hard to figure out who is to blame.  These mammoth corporations are not in business to look out for the best interests of the American people.  Rather, the purpose of these corporations is to maximize wealth for their shareholders.  So the American people end up eating billions of pounds of extremely unhealthy food that is loaded with chemicals and additives each year, and we just keep getting sicker and sicker as a society.  But these big corporations are raking in big profits, so they don’t really care.

If we did actually have a capitalist system in this country, we would have a high level of competition in the food industry.  But instead, the U.S. food industry has become increasingly concentrated with each passing year.  Just consider the following numbers about the U.S. agricultural sector…

The U.S. agricultural sector suffers from abnormally high levels of concentration. Most economic sectors have concentration ratios around 40%, meaning that the top four firms in the industry control 40% of the market. If the concentration ratio is above 40%, experts believe competition can be threatened and market abuses are more likely to occur: the higher the number, the bigger the threat.

The concentration ratios in the agricultural sector are shocking.

-Four companies own 83.5% of the beef market.
-The top four firms own 66% of the hog industry.
-The top four firms control 58.5% of the broiler chicken industry.
-In the seed industry, four companies control 50% of the proprietary seed market and 43% of the commercial seed market worldwide.
-When it comes to genetically engineered (GE) crops, just one company, Monsanto, boasts control of over 85% of U.S. corn acreage and 91% of U.S. soybean acreage.

When so much power is concentrated in so few hands, it creates some tremendous dangers.

And many of these giant corporations (such as Monsanto) are extremely ruthless.  Small farmers all over America are being wiped out and forced out of the business by the predatory business practices of these huge companies…

Because farmers rely on both buyers and sellers for their business, concentrated markets squeeze them at both ends. Sellers with high market power can inflate the prices of machinery, seeds, fertilizers and other goods that farmers need for their farms, while powerful buyers, such as processors, suppress the prices farmers are paid. The razor-thin profit margins on which farmers are forced to operate often push them to “get big or get out”—expanding into mega-operations or exiting the business altogether.

Of course the control that big corporations have over our food supply does not end at the farms.

The distribution of our food is also very highly concentrated.  The graphic shared below was created by Oxfam International, and it shows how just 10 gigantic corporations control almost everything that we buy at the grocery store…

And these food distributors are often not very good citizens either.

For example, it was recently reported that Nestle is running a massive bottled water operation on a drought-stricken Indian reservation in California…

Among the windmills and creosote bushes of San Gorgonio Pass, a nondescript beige building stands flanked by water tanks. A sign at the entrance displays the logo of Arrowhead 100% Mountain Spring Water, with water flowing from a snowy mountain. Semi-trucks rumble in and out through the gates, carrying load after load of bottled water.

The plant, located on the Morongo Band of Mission Indians’ reservation, has been drawing water from wells alongside a spring in Millard Canyon for more than a decade. But as California’s drought deepens, some people in the area question how much water the plant is bottling and whether it’s right to sell water for profit in a desert region where springs are rare and underground aquifers have been declining.

Nestle doesn’t stop to ask whether it is right or wrong to bottle water in the middle of the worst drought in the recorded history of the state of California.

They have the legal right to do it and they are making large profits doing it, and so they are just going to keep on doing it.

Perhaps you are thinking that you can avoid all of these corporations by eating organic and by shopping at natural food stores.

Well, it isn’t necessarily that easy.

According to author Wenonah Hauter, the “health food industry” is also extremely concentrated…

Over the past 20 years, Whole Foods Market has acquired its competition, including Wellspring Grocery, Bread of Life, Bread & Circus, Food for Thought, Fresh Fields, Wild Oats Markets and others. Today the chain dominates the market because it has no national competitor. Over the past five years its gross sales have increased by half (47 percent) to $11.7 billion, and its net profit quadrupled to $465.6 million. One of the ways it has achieved this profitability is by selling conventional foods under the false illusion that they are better than products sold at a regular grocery store. Consumers falsely conclude that these products have been screened and are better, and they are willing to pay a higher price.

The distribution of organic foods is also extremely concentrated. A little-known company, United Natural Foods, Inc. (UNFI) now controls the distribution of organic and natural products. Publically traded, the company has a contract with Whole Foods and it is the major source of these products for the remaining independent natural food stores. This relationship has resulted in increasingly high prices for these foods. Small manufacturers are dependent on contracts with UNFI to get their products to market and conversely, small retailers often have to pay a premium price for products because of their dependence on this major distributor. Over the past five years, UNFI’s net sales increased by more than half (55.6 percent) $5.2. billion. Its net profit margin increased by 88 percent to $91 million.

Everywhere you look, the corporations are in control.

And this is especially true when you look at big food retailers such as Wal-Mart.

Right now, grocery sales account for about half of all business at Wal-Mart, and approximately one out of every three dollars spent on groceries in the United States is spent at Wal-Mart.

That is absolutely astounding, and it obviously gives Wal-Mart an immense amount of power.

In fact, if you can believe it, Wal-Mart actually purchases a billion pounds of beef every single year.

So the next time someone asks you where the beef is, you can tell them that it is at Wal-Mart.

On the restaurant side, the ten largest fast food corporations account for47 percent of all fast food sales, and the love affair that Americans have with fast food does not appear to be in danger of ending any time soon.

Personally, if you do not like how these corporate giants are behaving, you can always complain.

But you are just one person among 313 million, and most of these big corporations are not going to consider the ramblings of one person to be of any significance whatsoever.

Collectively, however, we have great power.  And the way that we are going to get these big corporations to change is by voting with our wallets.

Unfortunately, the vast majority of Americans seem quite satisfied with the status quo.  So the population as a whole is likely going to continue to get sicker, fatter and less healthy with each passing year, and the big food corporations are going to keep becoming even more powerful.