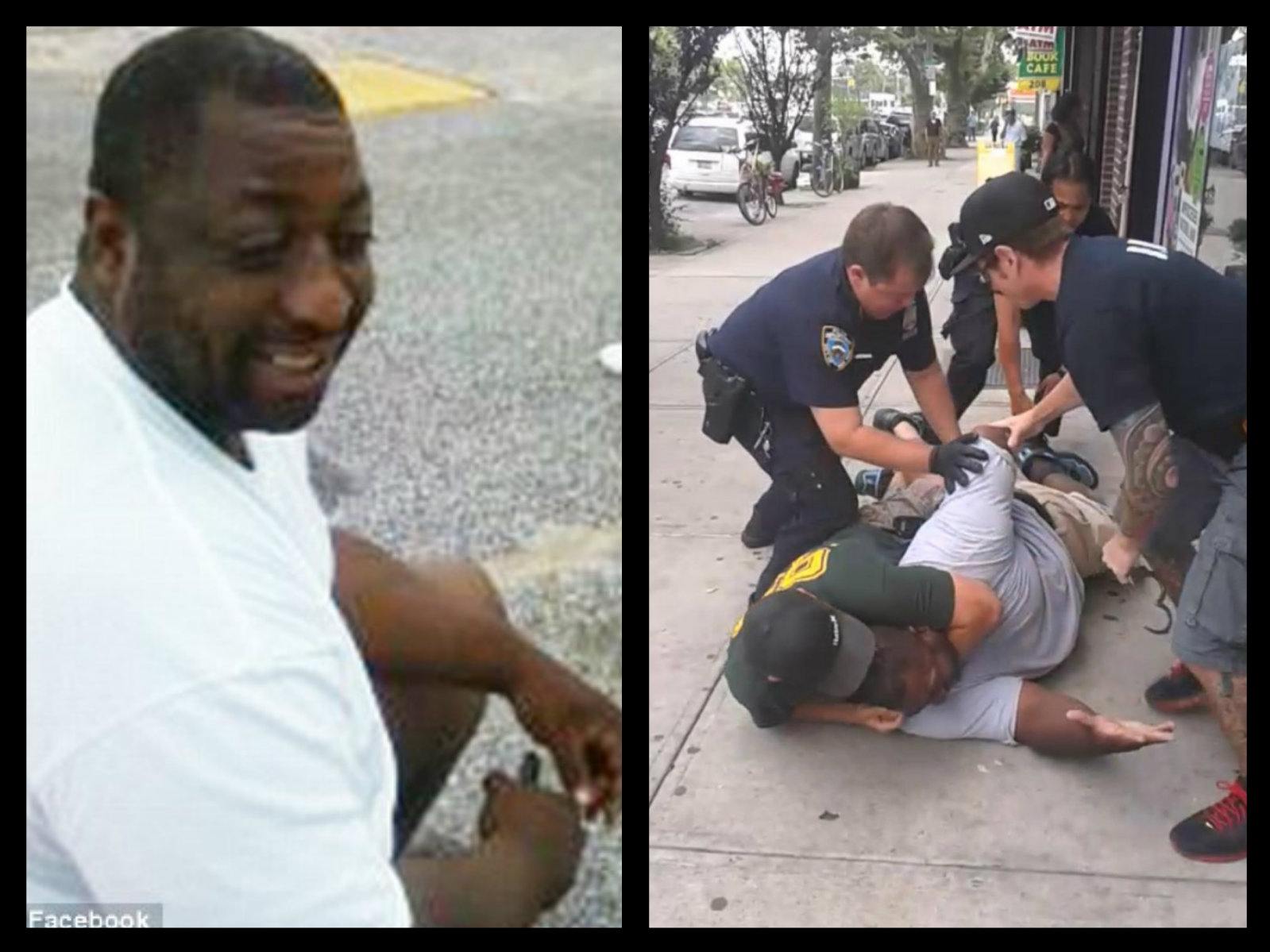 A New York man died after an NYPD thug put him in a chokehold and other officers slammed his head into the ground.

Eric Garner, a 43-year-old married father of six and grandfather of two, died of a heart attack during the altercation with officers on Thursday.

Garner was standing outside of a Tompkinsville beauty supply store when two plainclothes NYPD officers approached him and accused him of selling untaxed cigarettes.

Ramsey Orta, 22, who shot video of the incident, tried to intervene. He told the cops that Garner had just broken up a fight between three men and had not been selling cigarettes.

That video footage shows Garner asking the cops why they were stopping him.

“Every time you see me you want to mess with me,” Garner told cops in the video. “I’m tired of it. It stops today!”

Garner refused to put his hands behind his back and asked one officer not to touch him. That’s when backup officers arrived.

The video shows at least one officer put Garner in a chokehold.

Then several uniformed officers joined in and slammed Garner to the ground.

Then he went silent and paramedics were called.

“They ran up on him and got rough right away. He wasn’t fighting back,” said witness Gordon Benson, 33.

“When he was on the ground, they kept holding him by the neck.”

“They were choking him. He kept saying, ‘I can’t breathe, I can’t breathe! Get off of me, get off of me!’ and I didn’t hear any more talking after that,” said witness Valencia Griffin, 50, of Staten Island. “He died right there.”

Of course, the NYPD is saying that Garner “took a fighting stance” and “absolutely resisted arrest.”

In early 1990s, the NYPD was banned from using chokeholds – which are restraining maneuvers that cut off the flow of blood and oxygen to the brain – due to the rising numbers of deaths of suspects in police custody.

In 1993, then-Commisioner Ray Kelly banned the use of chokeholds by officers, the New York Times reported.

“Members of the New York City Police Department will NOT use chokeholds. A chokehold shall include, but is not limited to, any pressure to the throat or windpipe, which may prevent or hinder breathing or reduce intake of air.”

From the NY Times:

The city’s policy specifically did not distinguish between various types of holds, but rather banned them categorically. It also prohibited other restraints or tactics — like standing on a suspect’s chest or transporting a suspect in a face-down position — which might impede breathing.

Esaw, Garner’s wife, told the NY Daily News that “When I kissed my husband this morning, I never thought it would be for the last time.”

Family members and witnesses at the scene of the arrest say Garner wasn’t selling cigarettes on the day he died. Records do show he has previous arrests for possessing and selling untaxed cigarettes, but does it matter anyway?

SI Live spoke with people who knew Garner. The Rev. Lloyd Land, of the First United Christian Church, described Garner as a “gentle giant” and said his death makes no sense:

He added, “He was a gentle giant. Insofar as violence, I don’t believe if you smack him in the face he would hit you back … The police have no reason to attack him.”

So here we have what appears to be yet another senseless death at the hands of overzealous “law enforcement.” This tragic story is all too familiar, with eerie similarities to the cases of Kelly Thomas and James Boyd.

A man with a family is dead – over alleged sales of “untaxed” cigarettes. What is happening to America?