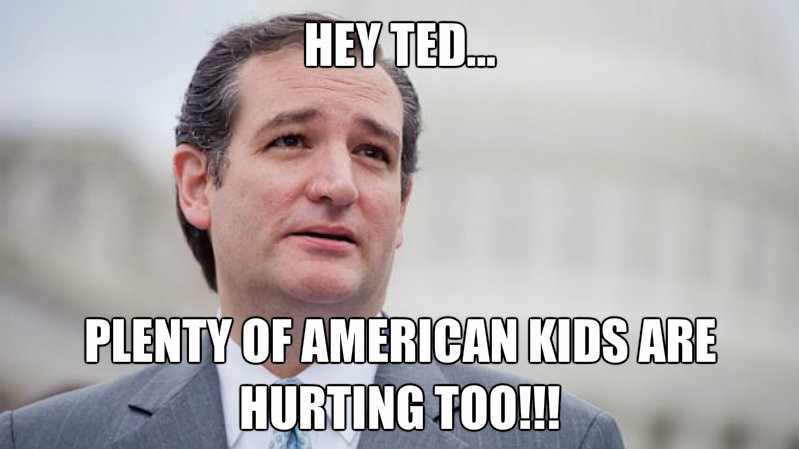 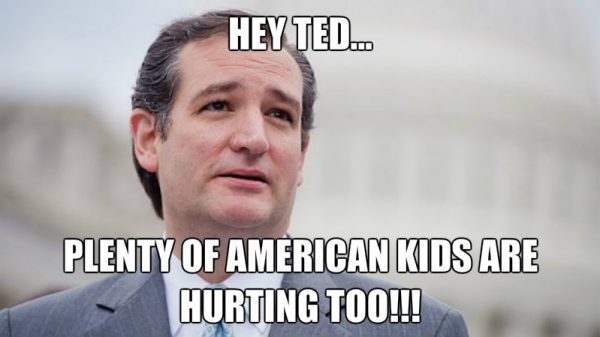 Just when you think things can’t get any crazier with the illegal alien invasion of the United States through our porous southern border, it does. The hullabaloo occurring because of “children” crossing the border, which the mainstream media touts as the majority of crossers in opposition to actual fact, is producing controversy between upholding the law and breaking the law. Glenn Beck is taking soccer balls and teddy bears along with meals and clothing to the Texas border to “help” these children using his own money and money he solicited from his followers. The surprise in all of this is that Sen. Ted Cruz (R-TX) is now joining with Beck at the border on Saturday to “feed, clothe, and provide toys for illegal immigrant children.”

Beck keeps good company as his efforts have garnered the support of Rep. Louie Gohmert (R-TX), Fox News host Bill O’Reilly, and none other than conservative rocker Ted Nugent.

Spokeswoman for Cruz, Catherine Frazier, states in an email to The Blaze:

Tens of thousands of children are being smuggled into the United States by dangerous drug cartels and transnational gangs – it is heartless to allow that to continue.

But while we work to reverse the policies that have cause this tragedy, it is important we recognize the human element of this crisis, and Sen. Cruz is glad to join Glenn Beck and Mercury One in that effort to provide some relief from the suffering this administration is causing.

What else can be said? The truth in law being repeated is a broken record that has now been shattered. When the “golden boy of upholding the Constitution” decides to get in on the “humanitarian crisis” mainstream media train, it is time to face the facts that the American people are destined to be, if not already, subjects to the elite in Washington headed by the usurper in chief. Not to mention, the American people are being fed more shill when a spokeswoman states they are working “to reverse the policies” that produced this “tragedy.”

Every crisis has a human element. Americans see that daily in the unemployment numbers, the number of veterans who are homeless and dying because of lack of care under the VA, the number of homeless children who lose hope daily because of being forgotten, the number of veterans waiting for benefits from the VA, and the sheer number of Americans barely carving out a means to live that is a product of the government’s policies. But, money is being raised and elected officials are spending their time hopping down to McAllen, Texas because of a media-dubbed “humanitarian crisis” involving illegal alien invader “children” who should have never been allowed to cross the border in the first place.

While this rages on and the government continues to transport these disease-ridden illegals to every state in America, not one person in the media, mainstream or otherwise, is asking the questions which every American has the right to have answered. Many of those questions were posed in a previous article on Freedom Outpost. Surely, those in a position to ask these “representatives of the people” have the same questions as an obscure blogger. So, why are the questions not being asked? Even if those powers that be dodge, skirt, obfuscate or refuse to answer, the officials are being confronted with the growing concern among the American people.

What are the “many ways” to deal with the usurper Obama? Only one was announced by Boehner and that was – you guessed it – suing Obama. Boehner disagrees with impeachment, thereby ignoring the Constitutional remedy. Boehner indicates the Senate “doesn’t have an appetite” to withhold funds, which the Senate is not controlling of the purse; so, no matter how the Senate “appetite” is, the House can still withhold funding. But, because of the Senate “appetite,” Boehner indicates withholding funds as a non-option. As America has seen, the House does not have the “stomach” to ride out the storm of performing their duty according to the Constitution. While the establishment Republicans present a posture of upholding the Constitution, the capitulation on the government “shutdown,” if you can call it that, proves they neither want to uphold the Constitution nor have the backbone to suffer through a bit of backlash among the liberal progressive left wing.

Our Constitution has become a Chinese buffet, whereby elected officials in Washington are choosing which parts to uphold and which to disregard. Cruz rages against the Democrats wanting to limit the First Amendment free speech clause regarding campaign donations while ignoring the duty of the government to protect the citizens from invasion. An invasion is not only a combative aggressive force seeking to gain sovereignty over the nation and its people; it is also a large influx of illegal individuals that seek to devastate our economy by overwhelming our resources which in turn devastates the people and nation through the infliction of poverty, not to mention the increase in cartel and criminal activity that accompanies these individuals through their culture. You can bet that once these “children” are shuffled to every corner of our nation, their parents are sure to follow along with every conceivable family member related to the “child.” Does anyone actually believe that Cruz does not know this or has not formulated this scenario when millions of Americans have theorized it already?

For right now, the House is refusing to grant that $3.7 billion requested by Obama. However, when the Department of Homeland Security runs out of funds in August or September – and it will, the House will capitulate once again and provide funding to continue this out of control agency and Obama. The “many ways” to control this usurper executive is down to one only because Boehner “disagrees” with impeachment and the Senate has not “the appetite” to withhold funding. Because of the lack of backbone and will to stand up to the usurper and his Senate ilk, Americans can bank on amnesty and pathways to citizenship to follow without the border being secured. Americans can also look forward to a reworking of the immigration law to allow the whole of Central America and Mexico to move right in thereby changing the face of this nation from one of freedom to one of subjugation to the “new” masses that will dictate, through lobbying and protest, laws that further impoverish and destroy the middle class taxpayers.

So, Americans are faced with an invasion taking place along the southern border that threatens to overwhelm our economy and unleash possible pandemic illness across the nation, as well as a governing body who is now picking and choosing what parts of the law, including the Constitution, they will uphold and enforce while deciding to spend tax dollars on every whim concocted by the usurper in chief. Lawmakers are blatantly becoming criminals themselves by violating the immigration laws and aiding and abetting these illegal alien invaders by providing comfort measures all because of using children as a shield. These individuals have already capitulated and surrendered on upholding five of the ten Bill of Rights. How long before they “decide” to surrender on the rest?

While many individuals are really gung-ho over Ted Cruz, it is important to look at actions taken as well as words spoken. America is either a nation of laws or a nation of lawlessness. Someone once said, “A man may go to Washington an honest man; but within three years, that man will become as dishonest as the environment he swore to combat.” Not to burst anyone’s bubble, but is this what is being seen in Ted Cruz? Is this a man that people want sitting in the Oval Office as many have supported a Cruz run in 2016, regardless of eligibility?

Those that have sounded the alarm to wake Americans into action have warned of this very scenario taking place; but, Americans remain asleep continuing to vote in these “political” fossil relics along with “new blood” that eventually turns “old” by succumbing to the corrupt environment known as Washington, DC. Unfortunately, the midterms upcoming provides little hope for this nation. One can only guess what 2016 will bring if America lasts that long.

As of right now, Americans have three choices: be subjugated, fight and die trying with the possibility of success, or leave this nation for another. The problems with the last option are where to go, what nation would accept those leaving America, and how can those who cannot afford to go get there. The problems with the middle option are getting Americans to throw off their apathy, wake up, unite and realize the downfall of a nation is upon us and today’s freedoms will be gone in a blink. Another option, which is highly unlikely, is to split America into two nations along liberal and conservative lines. As history has shown, the federal government would not hesitate to unleash its forces against those who attempt to establish a new country within this large nation. Any attempt toward secession would surely lead to dictatorial rule.

Americans are surely between a rock and a hard place. We can go up (stand tall and firm) or we can go down (kneel to a dictatorial regime). The choice is on the people.