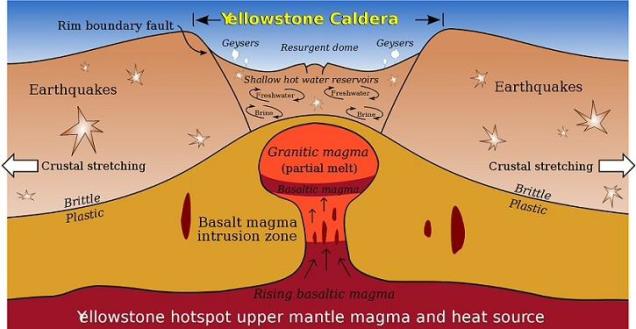 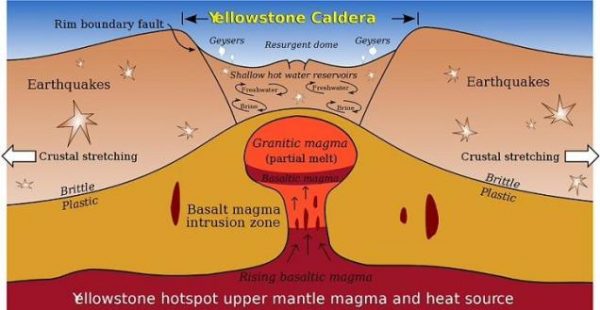 Yellowstone National Park is an area of outstanding natural beauty. Millions of people go each year to see the geysers, fumaroles and hot springs that occur within the park. Underneath Yellowstone the magma that heats the wonders at the surface is not so benign. The molten rock churns and increases the pressure on the ground above it causing it to rise over time.

“Anytime you come to Yellowstone you have to drive uphill,” explained supervolcano scientist Dr. Robert Smith. “And the reason is this giant plume of magma is very hot, therefore it’s ebullient, it’s low density and it just lifts the surface up.”

“These giant eruptions in Yellowstone – the supervolcano, if you wish — probably last many, many months, maybe even years,”

“If we were to have another big eruption, it would affect a large area, on the order of several states,” Smith said.  (source)

“We record earthquakes in and around Yellowstone, and we measure the seismic waves as they travel through the ground,”

“The waves travel slower through hot and partially molten material… with this, we can measure what’s beneath.”

Smith and Farrell believe that Yellowstone erupting is a high impact but low probability scenario.  However, there have been signs that the magma beneath the surface is more restive of late.

Animals have been filmed leaving the area en masse:

and roads are melting due to excessive heat underneath the road surface. The area has been closed to visitors.

The scientists say there is no sign of a pending eruption at Yellowstone, but they continue to monitor the caldera closely.

It’s not a case of if Yellowstone erupts, but when. Eventually, the pressure will build and the magma will rise, forcing its way out of the ground. The effects will be felt around the globe in lower temperatures and failed harvests. Some even predict a nuclear style winter from the massive ash fallout that an eruption at Yellowstone would bring.

The following video explains supervolcanoes and what can be expected when one of them blows its top.