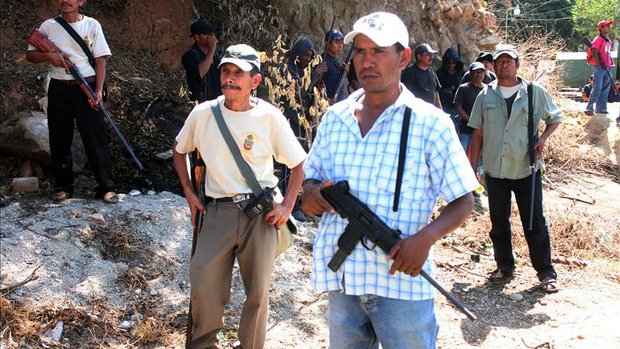 In the last year the efforts of Mexican citizens to arm and protect themselves against violent drug cartels, corrupt politicians and law enforcement has garnered international attention. Mexico has seen a massive growth in violence between drug trade organizations and the government. Homicides and other violent crimes have been carried out with impunity, often involving government officials and law enforcement officers. The rise of violence from the drug cartels has sparked a movement of autodefensas, or self-defense community militias.

In early 2013 the autodefensas gained significant numbers in the Mexican state of Michoacán. The militias sought to defend the communities against Los Caballeros Templarios (The Knights Templars) drug cartel. President Enrique Peña Nieto responded to the violence by sending in federal police and troops. Despite this, the Templarios continued to attack and the violence continued.

On May 10th of this year all citizen militias were given the option of disarming and joining a newly formed rural police force or be considered criminals with illegal weapons. The NY Daily News reported that out of an estimated 20,000 militia members 3,300 have currently signed up. Those who did convert were given assault weapons and new uniforms. They will reportedly be trained by the authorities and continue to assist with tracking drug cartels and protecting the community. As of late June many autodefensas were still operating and the Ministry of the Interior stated that it lacked the resources to maintain a federal police presence in Michoacan.

In a country where civilian gun ownership is highly restricted and the government seems incapable of defending average citizens it makes sense that at some point the people would come together in search of solutions. In the United States, however, the idea of community defense is not necessarily one many people want to entertain. Corruption and crime exist but there is enough of a semblance of balance that, for most people, taking up arms in defense of the community is not high on their list of priorities. However, with decaying American cities such as Detroit being left to criminals, and police brutality on the rise since 9/11, many Americans are considering alternative options for community protection.

In Mexico the autodefensas were born out of necessity. The people grew tired of corruption and neglect, opting to take up arms and form volunteer-run community protection units. When examining the United States for a candidate city for self-defense initiatives, Detroit looms large. The local government has broken down in a similar fashion to what we see in Michoacán. The Detroit Free Press reported 386 homicides in 2012, the highest since 2007′s 392 homicides. This was Detroit highest homicide record in two decades.

The escalating violence led Mayor Dave Bing to say, “We’ve lost respect of each other, We’ve lost respect for life.” In May Detroit Police Chief James Craig received national attention for encouraging residents to arm themselves for their own protection. The Detroit Police Department is notorious for taking as long as 58 minutes to respond to emergency calls. To combat this the Chief says it is a wise decision for law abiding citizens to be armed. Apparently Detroit citizens were listening because there have been a growing number of  self-defense shootings this year alone.

In an interview with the magazine America’s 1st Freedom, Craig states, “More and more Detroiters are getting sick of the violence. I know of no other place where I’ve seen this number of justifiable homicides.” The Chief is quick to point out that the DPD are not advocates of violence but rather,“We’re advocates of not being victims.” He says he does not support vigilantism but does support Americans right to self-protection and self-defense.

One company seeks to level the playing field. Detroit Threat Management is a private security firm and bodyguard training school that was founded by “Commander” Dale Brown. Threat Management offers paid security work for neighborhoods, corporations, film sets, and also offers free services for the most vulnerable and poor. Brown says the free services are possible due to hefty profit margins from working security for corporations.

Dale Brown served in the U.S. Army from 1989-91 before founding Threat Management 20 years ago. Originally a self-defense school, Threat Management expanded to include the bodyguard training program. He teaches his guards, called VIPERS, to use violence and guns as a last resort. Threat Management’s Prime Directives reflect his compassion for the community and desire for non-violence.

Brown and the VIPERS seem to have gained the support of the City, the people, and members of the police force. In 20 years of service he says not one citizen has been harmed and they have had zero VIPER deaths. Threat Management partners with the city to protect and escort victims of domestic violence that are not offered protection from the dwindling police force. In February 2012 Council Member Kenneth Cockrelintroduced a resolution to honor the teams community service and in “special recognition of their protection and sheltering of the victims of domestic violence in the City of Detroit and Wayne County.”

There may be legitimate fears regarding private institutions handling community defense, but Brown and his team seem to have tapped into a genuine need. Where the governments and traditional police forces fine and often inflict violence on the people who are literally writing their checks through taxation, Detroit Threat Management’s funding is completely voluntary and dependent on providing their customers what they want: A safe life in Detroit. If more private community defense organizations are formed they will be held to a standard that is currently being set by the VIPERS.

Indigenous Community Defense as a Model

By understanding indigenous community models for defense we may be able to apply the same concepts to Detroit and other cities where a future economic downturn may require such action. Of the nearly 17,000 people who have not joined the Fuerza Rural in Michoacán, one community has said they will continue to operate their own community defense force. In the town of Cherán, in the Purhépecha region, a system of traditional indigenous law-enforcement and accountability continues to guide the people.

According to a 2014 report by the Woodrow Wilson Center’s Mexico Institute and InSightCrime, there are at least four distinct militia models in Michoacán:

“The first is of the type that appeared in Cherán – indigenous communities who have a longer history and experience creating and maintaining organized vigilante groups. The second comes from a poor rural and semi-urban background, which have organized around protecting their small business and family interests. The third model is backed by larger, industrial-sized interests. The fourth is backed by other criminal groups. There are probably mixtures of all these groups as well working together, at least temporarily. “

In early 2011 residents of Cherán created armed militias to fight off illegal logging in their community. The community kicked out politicians and police accused of ties to the drug cartels and began a new system of governance based on Purhépecha traditions. One of the ways this is done is by maintaining a volunteer-run community guard that defends the community and answers to the town assembly. When the uprising first began you might see elderly women with sticks defending the community. These days the community guard is mostly young men and women with professional weapons.

While the community guard is by no means a perfect institution it does offer benefits to the locals that were not available under the police or cartels. Local business owners are no longer forced to pay several hundred dollars a month to criminals. The community guard is accountable to the town assembly and chosen by the people. This model is closer to traditional indigenous governance systems than what we are used to in the modern day.

When the people are forced to either accept violence or defend their homes, it seems obvious they will do the latter. In Mexico we see it happening as a result of rampant violence and corruption. In Detroit we see it happening out of a need to make the people feel safe again. As Commander Brown notes, if the people do not feel safe they will not invest in the city. Threats from criminals are only one aspect of the fight however.

Recently the American Civil Liberties Union released a report on the militarization of police forces around the nation. Kara Dansky, Senior Counsel with the ACLU’s Center for Justice, said they found that local police use SWAT no-knock raids for basic tasks such as serving warrants or searching for small amounts of drugs. The officers are armed with rifles, flashbang grenades and battering rams provided by the Departments of Defense, Homeland Security, and Justice. She also noted that the raids disproportionately affect people of color. “Our police are trampling on our civil rights and turning communities of color into war zones.”

As more local police departments opt for military style equipment, Americans fears grow. To save and revitalize Detroit it is going to take innovative action. If we hope to protect our communities and improve upon the mistakes of the past we must ask controversial questions. We must consider whether the current version of the police and self-defense are the best we can do. By building community alternatives to the traditional governmental institutions free citizens can begin the process of repairing damaged relationships and creating a world where communities can trust their neighbors and possibly even make the police force a symbol of good rather than the militarized, aggressive force they have come to be known as.