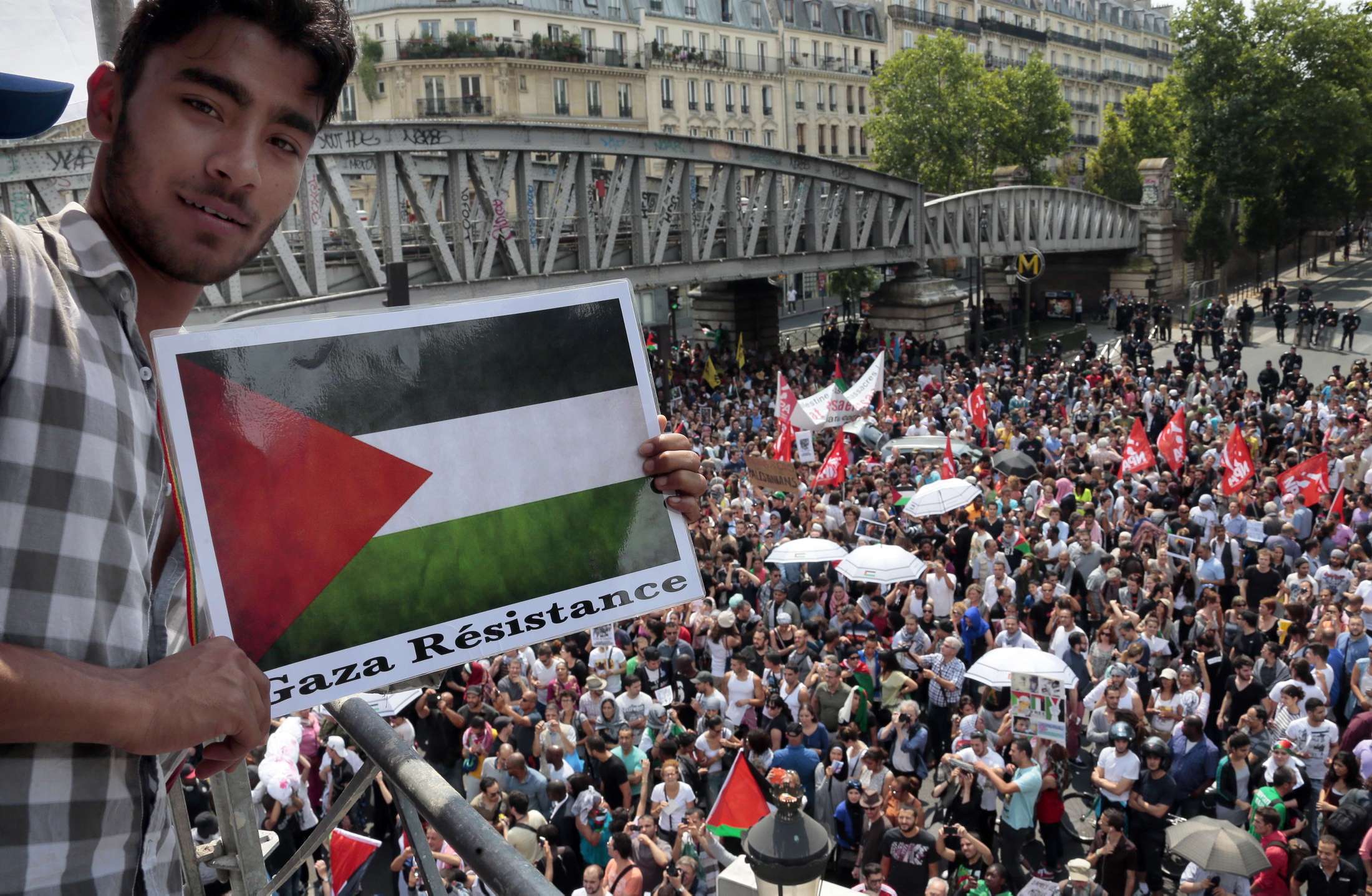 The protests by Palestinian supporters throughout the world are gaining momentum and sadly it is due to hype more than reality. However, while England is being overrun with such protests, France has decided to step up to the plate and ban pro-Palestinian protests. Why? It’s because they are not protests, they have become violent exhibitions of Islam, i.e. terrorism.

France’s Socialist government provoked outrage today by becoming the first in the world to ban protests against Israeli action in Palestine.

In what is viewed as an outrageous attack on democracy, Socialist Interior Minister Bernard Cazeneuve said mass demonstrations planned for the weekend should be halted.

Mr Cazeneuve said there was a ‘threat to public order,’ while opponents said he was ‘criminalising’ popular support of the Palestinian people.

On Friday night, lawyers for a number of groups hoping to campaign on behalf of Palestine on Saturday lodged an appeal against the ban in a Paris court.

The move by the French followed violence at protests in Paris last week. Seeing that thousands more were scheduled to protest this weekend, the government decided to ban the protests.

What kinds of penalties will be enforced? Those who violate the ban will be fined 15,000 euros. If they are wearing masks or hiding their face in any way, the fine can be increased three-fold to 45,000 euros with an additional three years in jail. However, the law doesn’t just govern those who are involved in the protests. It also imposes a fine of 15,000 euros and up to one year in prison for publishing details of an illegal rally, which can escalate to 100,000 euros fine and seven years in prison if the postings lead to more violence.

These protests claim to be peaceful and against the killing of children. However, take a look at a vigil in Canada for the three Jewish schoolboys who were kidnapped and murdered. Notice how things were peaceful till the Palestinian supporters showed up. I didn’t see any of those Palestinian supporters protesting those young men’s deaths, did you? Notice the bowing to sharia that the police engaged in.

While many of these protests are based on alleged killing of children and genocide by Israel, the reality of what is taking place is quite different. Not only is Israel warning the people of Gaza before they attack, but there are even reports of Israeli pilots abandoning attacks due to the fact they believed children to be in targets they were to destroy.

Second, Hamas, organized Islamic terrorists that were elected by the Palestinian people, are telling the people not to leave their homes when Israel warns them.

Third, there is no genocide going on. How can I say that? At least one fifth of Israeli citizens are Arab. More than one fifth of those living in the West Bank, under Israeli control, are Palestinians without voting rights. Then there are those that choose not to be a part of Israel at all who are in Gaza and have been raining down rockets on Israel.

By the way, some of the most ridiculous things have been said about those rockets, such as Israel has no right to go and attack Gaza because those rockets aren’t killing anyone and they rarely hit people. So, if someone stands in the road in front of my house and shoots at my house, but because they have a defective weapon and are too stupid to actually hit the house or any of my family, I should just let them do it and not return fire, seeking to eliminate the threat of the foolish attacker? That is the logic going on here.

There is no genocide going on. There is elimination of a threat, which is what they are after. Palestinians have had multiple opportunities for peace and tranquility, living alongside Israel, but that is not what those in Gaza want. In fact, a brief glance at the Palestine National Charter of 1964 to see who is really after genocide. According to the charter:

We, the Palestinian Arab people, who believe in its Arabism and in its right to regain its homeland, to realize its freedom and dignity, and who have determined to amass its forces and mobilize its efforts and capabilities in order to continue its struggle and to move forward on the path of holy war (al-jihad) until complete and final victory has been attained.

I clearly believe in a people having the right to defend themselves, but what is taking place in Gaza are people provoking another people against them, not self-defense. Their “complete and final victory” will be when Islam takes over the world, not merely removing Israel from a postage stamp piece of land.

However, remember that charter was in 1964. In 1988, Hamas formed its own covenant in which it cites Imam Hassan alBanna:

Israel will exist and will continue to exist until Islam will obliterate it, just as it obliterated others before it.

Do you understand that people? George W. Bush was wrong, we are not at war with radical Islam and neither is Israel. We are at war with Isalm. The charter goes on to state:

Our struggle against the Jews is very great and very serious. It needs all sincere efforts. It is a step that inevitably should be followed by other steps. The Movement is but one squadron that should be supported by more and more squadrons from this vast Arab and Islamic world, until the enemy is vanquished and Allah’s victory is realised.

Then there is this little tidbit:

“The Day of Judgement will not come about until Moslems fight the Jews (killing the Jews), when the Jew will hide behind stones and trees. The stones and trees will say O Moslems, O Abdulla, there is a Jew behind me, come and kill him. Only the Gharkad tree, (evidently a certain kind of tree) would not do that because it is one of the trees of the Jews.” (related by alBukhari and Moslem).

The charter also claims, “In face of the Jews’ usurpation of Palestine, it is compulsory that the banner of Jihad be raised.”

The issue for Palestinians is the extermination of the Jews, plain and simple. It’s in black and white. That has not be the issue for Israel, whose population is made up of Palestinians and Arabs.

As Joshua Charles pointed out recently, the people of Gaza are in the mess they are in, not because of Israel, but because they believe their lying leaders. Sadly, America and England are doing the same thing. We are in a mess because we have chosen to believe lying leaders and have sought to appease Islam, rather than stand for truth, law and the Creator God.