It’s in the quran, respect it!

Obama say, “The future must not belong to those who slander the prophet of Islam.”

Sudanese Cleric Al-Jazouli: In Islam, ‘Killing [Infidel] Women And Children Is Permitted’; ‘The Prophet Muhammad Said That It Is A Duty To Fight And Target America’ MEMRI

Following are excerpts from a Friday sermon delivered by Sudanese cleric Muhammad Al-Jazouli, which was posted on the Internet on June 20, 2014:

Muhammad Al-Jazouli: “American taxpayers share the blame for the blood of every Iraqi child. Our Prophet Muhammad said that anyone who helps kill a Muslim man – even by uttering half a word – no longer enjoys protection. Whoever helps kill a Muslim child, or rather, a Muslim man, with half a word… Listen to this fatwa… In its war with the infidels, Islam recognizes no distinction between regular armies and civilians.

“I was very happy to learn about the relevant hadith. I felt overjoyed when I heard it. [Mus’ab Ibn Juthama] told the Prophet Muhammad that while the Muslims would attack the polytheists at night, women and children would be harmed.

“The Prophet Muhammad answered: “[Their offspring] constitute part of them.” They are part of them, said our beloved Muhammad. This is not merely someone’s opinion. Thus, killing their women and children is permitted.

“America is fighting us and there are countries that are allied with it. The Prophet Muhammad said that it is a duty to fight and target America, and same goes for targeting its allies.

“Oh mujahideen of ISIS, do not pray voluntary prayers anywhere but Baghdad.” 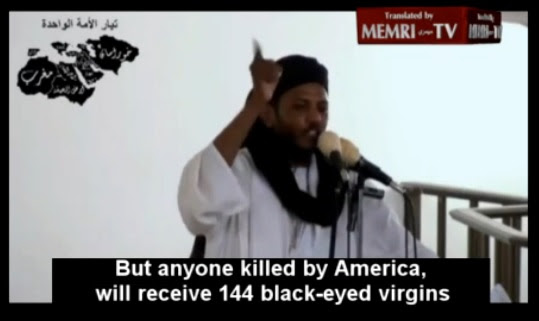