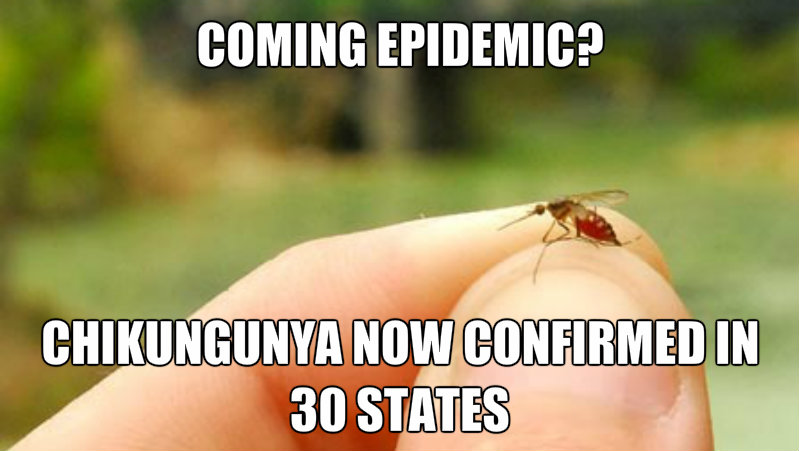 Cases of the chikungunya virus are appearing in the United States at a level that is far higher than anything health officials have seen in recent years, and now there are two confirmed cases of people that have not even traveled out of the country getting the virus.  That means that the chikungunya virus is starting to spread in America, and once it starts spreading it is really hard to stop.  Instead of spreading human to human, this virus actually spreads “person-to–mosquito-to-person”.  If you live in an area of the country where there are a lot of mosquitos, you should pay close attention to this article.  You do not want to get the chikungunya virus.  According to Slate, the name of this virus “comes from a Makonde word meaning ‘that which bends up,’ referring to the contortions sufferers put themselves through due to intense joint pain.”  That does not sound fun at all.  Fortunately, the U.S. has not really been affected by this disease in recent years, but an epidemic has already been declared in Puerto Rico, and some experts are now saying that it is only a matter of time before we see one in the United States.

But by July 15th of this year there were already 357 reported cases, and health officials are bracing for the worst.

Of course of biggest concern is what just happened in Florida.  For the first time, health officials have isolated cases of the chikungunya virus that they know were transmitted locally…

U.S. health officials on Thursday confirmed two locally acquired cases of chikungunya in Florida. In Puerto Rico, the government has declared an epidemic of the mosquito-borne virus, with reports of more than 200 diagnosed cases since June 25 in San Juan and surrounding areas.

On Thursday, the CDC confirmed a 50-year-old male in Palm Beach, Fla. was diagnosed with the virus, and had not recently traveled outside the country. Florida state health officials are also reporting a 41-year-old woman in Miami Dade Country has been diagnosed with locally transmitted chikungunya. The CDC has not yet provided confirmation on the second case. Local transmission occurs when the insect bites a person with the infection and then transmits the virus by biting others.

So if you live in south Florida, you should really be trying to avoid mosquitos right about now.

But Florida is not the only state that is on high alert at this point.

Over in Texas, there have been five confirmed cases of the chikungunya virus so far.  The following is an excerpt about one that was just discovered in Montgomery County…

The Montgomery County Public Health District is confirming their first case of the Chikungunya virus.

“The individual is a male teenager of Montgomery County who has recently traveled outside of the United States,” said Jennifer Nichols-Contella, Public Information Officer for the Montgomery County Public Health District.

“We have been testing our first potential cases of Chikungunya virus in Kentucky residents who recently traveled to areas where the disease is present, and have received confirmation of one positive result so far,” said Dr. Kraig Humbaugh, state epidemiologist and DPH deputy commissioner.

Overall, there are now 30 states that have confirmed cases.  In every case but the two in Florida mentioned above, it involved someone that had traveled internationally and came back…

The Center for Disease Control and state health departments are monitoring cases of Chikungunya, a virus that causes high fever, joint and muscle pain and headaches.

The virus has been reported in 153 cases linked to international travel, said Kristen Norlund, CDC spokeswoman, “meaning someone went to a place where the virus was circulating, got infected and then came back.”

Louisiana is one of 30 states with confirmed cases in residents who traveled internationally.

With so many cases already, it is going to be really difficult to keep a lid on this outbreak.  All it is going to take is a few well-timed mosquito bites and we could be off to the races.

Fortunately, the chikungunya virus is usually not fatal.  But if you do get it, you will probably remember the experience for the rest of your life…

With illness onset, the person develops high fever, chills, and joint pain, followed in some by a rash on the trunk, limbs and face lasting 3-4 days. Muscle and joint pain last about one week. Joint pain is often severe and in some people lasts longer, up to several months.

And just because it is usually not fatal does not mean that there would not be a lot of deaths during a full-blown epidemic.  The following analysis is from an article about the virus by Jeff Danner…

And the chikungunya virus is not the only virus carried by mosquitos that health officials are alarmed about this summer.

In Massachusetts, officials have confirmed a case of eastern equine encephalitis, which is fatal about a third of the time…

The Massachusetts Department of Health just confirmed that a July 15th laboratory test in Plymouth County has tested positive for EEE, a dangerous virus that can cause inflammation of the brain and in one third of cases, death.

Even though the only reported case of EEE in Massachusetts was more than 80 miles to our east, our chances in western Massachusetts of getting it just went up. But it probably wouldn’t be the mosquitoes bringing it here.

Birds are typically the long range carrier of triple E, taking the disease over many miles. Mosquitoes then bite the birds and become the local source for infection when they bite a human.

For decades, Americans really haven’t had to be concerned about the deadly diseases that are carried by mosquitos that cause so much problems in much of the rest of the world.

But now things are changing.

We are seeing very unusual disease outbreaks all over the planet, and the next great pandemic could be just around the corner.

Over in Africa, one of the worst outbreaks of the ebola virus ever recorded has already killed more than 600 people in Guinea, Liberia and Sierra Leone.

If that virus ends up traveling over to the United States, it will make the chikungunya virus look like a Sunday picnic.

It has been a really long time since the U.S. has had to deal with a full-blown health crisis.

Hopefully the chikungunya virus will not turn into one.

But as the globe continues to become a smaller and more interconnected place, experts warn that it is only a matter of time before the next great pandemic hits us.