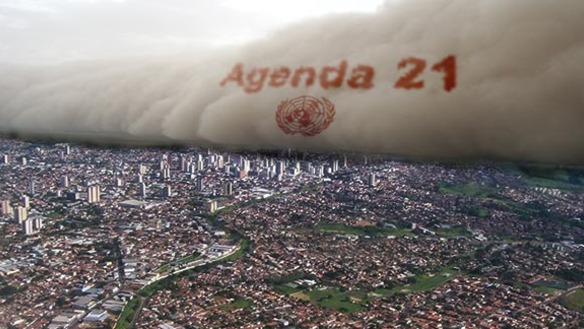 As a result of my contact with confidential sources, in relation to the present illegal immigration crisis and the presence of MS-13, who double as assassins for the Sinaloa and Los Zeta cartels, I have received inside information on how the globalists will ultimately force Americans to abandon their homes and seek safe refuge within the planned urban refugee centers which will be springing up under policies devised by Obama’s people.

The Easy Way and the Hard Way

Anyone who studies Agenda 21 policies does not need a primer on the fact that the globalists ultimately plan to herd six million Americans into 11 mega-cities and we will all live in micro apartments, give up our cars, adopt public transportation, have our every move monitored and forever be the property of the state. And there are two ways that the globalists are going to get us to accept our ultimate fate. There will be the easy way, which will consist of following the money incentives designed to force Agenda 21 policy compliance upon us. There will be a second method used just in case more passive methods of forcing rural/suburban to dense urban relocation are not successful. These methods involve violence and intimidation.

By the way, did your brain just catch the math error? Eleven megacities, with six million people each, equals 66 million total Americans. America presently has a population of approximately 315 million people. Where did the 251 million Americans go?

As a result of my investigation into the role and extent that the SANCHEZ-Paredes cartel and the Peruvian military control the arms and drugs shipments to the Sinaloa cartel and ultimately the Los Zeta’s and MS-13, I learned how Peru has accomplished much of its population shift away from being a rural nation only 25 years ago to becoming a nation of mostly urban dwellers in 2014.

The capital city of Lima, Peru, has grown from 2 million residents to 8 million residents in less than one generation. There were two primary means employed in Peru in which to force a massive relocation of the Peruvian people from their historic rural homes and farms to the dense inner city, micro apartments of Lima.

According to the United Nations research and scientific studies, nearly two-thirds of the entire population inhabiting the planet will face severe, life-threatening water shortages by the year 2025. The reasons most often cited for the water shortages are waste and poor planning which will result in uneven distribution. Peru has been one of these effected countries where water has been privatized and directed away from areas that the Peruvian, Agenda 21 based leadership wants people to avoid living. If you want to drink water and you live in Peru, you will move where they send you. In Peru, water and finance are intertwined in order to force relocation of rural populations to urban centers. To some extent, this water management scheme designed to get people off of there rural land is in use in Southern Oregon and Northern California. The problem of obtaining water access for the residents in these rural areas has become so bad, due to EPA and BLM communist based land management policies, that many of the residents are giving up and relocating to the cities in search of a job. Many of the residents are exploring the feasibility of an idea which would lead people to form a 51st state, known as the State of Jefferson. There is a second method being used to force people from rural areas in Peru to the stack and pack city of Lima and that is through abject violence. The Shining Path, or more commonly known as SENDERO LUMINSO has been murdering Peruvian rural residents. Their favorite tactic is to behead groups of people, throw their decapitated bodies into a stream and when they wash up downstream, they serve as a stern warning that it is not safe to live in a rural environment. The SENDERO LUMINSO uses this method to keep their cocaine fields free for the SANCHEZ-Paredes cartel in order to have use of the land to harvest cocaine. Secondly, the Peruvian government and the Agenda 21 policies receive a boost because the more independent rural population moves to the cities where they are easier to control and this lessens the threat of a popular uprising.

This kind of violence, in order to force Agenda 21 compliance, was previously unthinkable in the United States, until the recent immigration crisis reared its ugly head. While the MSM focuses on children who are refugees, we should be focusing on what the Border Patrol is quietly telling us; we are being invaded by MS-13, Los Zetas and the Sinaloa cartel. They are well armed, supplied with anti-tank weapons, RPG’s and automatic weapons. They have already fired upon the American Border Patrol. They are brazen and are more powerful than any local police force. I have come to learn that this paramilitary group will become a Fifth Column and violently carry out the edicts of their sponsors. This means that the rural residents that the BLM and the EPA cannot move from their land, will be forcibly removed. We are looking at the American version of the SENDERO LUMINSO entering our country. Soon our rural sheriffs will be claiming that they out-manned and out-gunned. These activities appear to the be the failsafe policies of the globalists with regard to creating an urban center concentration.

For now, Americans are being nudged into Agenda 21 by what I call the easy way. Financial incentives are being created to “encourage” relocation from rural/suburban to urban living.

Obama’s plans for his second-term include an initiative to systematically redistribute the wealth of America’s suburbs and rural areas to the inner cities. It’s a transformative communist idea and it is one that is already underway as these words are being written. The real brains behind the coming Agenda 21-inspired mass migration from the suburbs to the inner cities is Mike Krulig and his new group of community advisors, Building One America. Their secretive agenda has been mostly achieved by Obama’s appointment of like-minded community activists to his staff. In fact, Krulig was one of Obama’s original community organizing mentors from the President’s Chicago Southside days. The word stealth applies because a damning photo depicting Krulig and Obama meeting at the Whitehouse in 2011 which appeared on the Building One America website. (The photo is displayed above).  However, this type of publicity would not have been good for the swing voters living in America’s suburbs. Obama’s people had the video scrubbed as well as the search engine links. However, the Breitbart people retained a copy of the picture. This begs the question, if the Building One America plan is so good for America, why would the Obama people conceal his affiliation with Krulig and his group of Agenda 21 social engineers?

Kruglik’s Agenda 21 friendly group, Building One America, proposes the creation of a  regional tax-base sharing revenues in which suburban tax money is directly redistributed to nearby cities and economically depressed concentric zones of inner-ring suburbs. Building One America also seeks to move the poor out of cities by imposing mandatory low-income-housing quotas for middle-class suburban developments.

Krulig’s group also seeks to export the controversial regional tax-base sharing scheme currently in place in the Minneapolis–St. Paul area to the rest of the country. Under this program, a portion of suburban tax money flows into a common regional pot, which is then effectively redistributed to urban, and a few less well-off “inner-ring” suburban, municipalities. The Minneapolis-St. Paul area regional government is run by unelected and unaccountable bureaucrats who are out of control. It is critical to know that removing the election process from this endeavor was deliberate for reasons that will become obvious as the reader will discover.

Kruglik’s group also favors a variety of policies designed to force people out of their cars and force suburbanites, robbed of their own tax money, to relocate into densely populated stack and  pack cities. Among Kruglick’s strategies to separate people from their cars is the Vehicle Mileage Tax (VMT). Road pricing for the VMT would be implemented to force drivers out their cars. This will impact all drivers except for the Obama inspired exemption of low income drivers.

The VMT is designed to give favored status to certain groups. These groups represent organizations that want to transfer wealth through the heavy hand of regional government interfering in the housing, transportation and land use market place.

This tyranny is also being beta tested in the Bay area in a project entitled One Bay Area Plan. One Bay Area Plan is a 25 year plan which combines housing, transportation, and Agenda 21 land use policies. The public cover story is that the project is designed to save the planet by reducing Green House Gasses. The generated revenue, estimated at $15 million/day, would be used to fund further Agenda 21 transportation schemes such as buses, trollies and light rail which only a few people presently ride.

This plan also calls for Upzoning which would expland the plan to even more areas in the Bay. This would mean even more requirements for high density housing in cities that do not have their “fair share” of low income people. This will result in more 200 square foot apartments being constructed near public transit lines.

This Bay Area Agenda 21 plan also contains a concept referred to as the Communities of Concern (read low income and communities of color) would receive funds from these windfall profits that the region would receive.  (is Obama trying to provoke a race war?). Additionally, development fees would be eliminated for affordable housing developments, while subsidies would be used for favored activities such as the creation of more micro apartments and the construction of low income housing in the suburbs.

Most people mistakenly believe that the reality of the megacities concept in which we are all herded into the stack and pack cities is decades down the road. On the contrary, as you have seen, the program is being beta tested in two large metropolitan areas. These schemes will soon be coming to a neighborhood near you.

We are going to get Agenda 21 one way or the other. The question remains as to whether America is going to be transitioned into an Agenda 21 society by using less aggressive methods, or will we be doing things the hard way?

Are We Paying ‘Internet Influencers’ Now To Promote Getting ‘The Jab’?
April 15th, 2021 Clash Daily