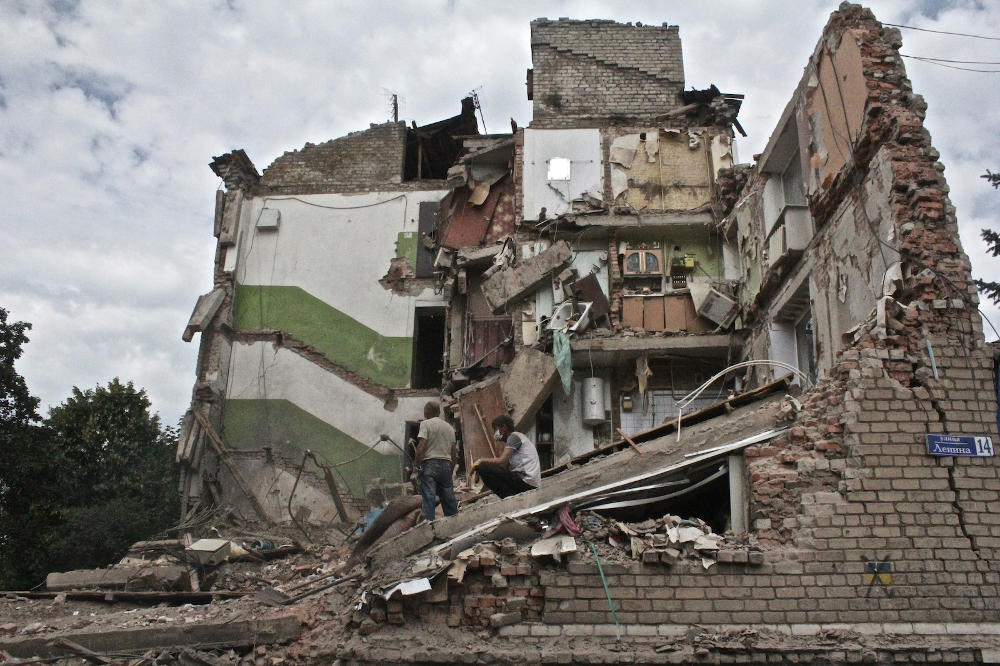 The killing of innocent civilians in Eastern Ukraine resulting from the conduct of major bombing and shelling operations by US supported Kiev regime is not newsworthy.  According to official sources, Four hundred and seventy-eight civilians, including seven children were killed and 1392 were wounded in Eastern Ukraine since the outset of the Kiev government’s military crackdown. (See RT,  July 1o, 2014)

The casualty figures were released on the 10th of July 2014 by Ukraine’s Ministry of Health.

“The amount on civilian casualties is, unfortunately, greater than the military ones,” Vasily Lazoryshynets, deputy health minister, …

“In the area of the operation in eastern Ukraine, 478 civilians have died, including 30 women and seven children,”he said.

According to Lazoryshynets , a further 1,392 people were injured in the fighting, with 104 women and 14 children among them.

There has been virtually no Western media coverage concerning this human tragedy. The deaths of innocent children resulting from Kiev’s “counter-terrorism operation” have been casually categorized as “collateral damage”.

In early June, according to figures of Ukraine’s National Security Council “200 soldiers and law enforcement officers had been killed and over 600 injured” during the so-called “anti-terrorist operation.” (Ibid). The Ministry of Defense reported the same figure of 200 deaths pertaining to soldiers on July 11.

Is the official count of civilian casualties reliable? On June 11, following the release of the figures on casualties by the Ministry of Health, Ukraine’s General Prosecutor Vitali Yarema confirmed that the government was to establish a data bank of persons killed and injured:

“Every death, every physical injury, every body of an unidentified individual found will be entered into the unified register of pre-trial investigations, and each case will be investigated as much as possible,”  (quoted by AP, July 11, 2014)

The above figures on civilian casualties are consistent with a ‘leaked” Ministry of Internal Affairs report (July 15, 2014): 496 civilians killed and 762 wounded (updated with data of casualties collected in the period extending from 9-15 July). (see below)

According to this “leaked” MIA document, the death toll of soldiers in the Ukraine Armed Forces would have increased from 200 in early July (reported on July 10th by the Ministry of Health) to 1600 in mid-July (MIA, leaked report, see table below, dated July 15). These rounded up figures suggest that the Kiev government’s figures on soldiers “killed in action” are rough estimates.

The table below which includes the figures of civilian and military casualties included those wounded reported by the Ministry of Internal Affairs (sent to Global Research by a source in Ukraine) are as follows:

The Ministry of Internal Affairs (MIA) and its Anti-Terrorism Organization (ATO) oversees the military operation in Lugansk and Donetsk in liaison with the Ukrainian Armed Forces.

The information was officially released on July 15, 2014 bearing the signature of the Arsen Avakov (Minister of Internal Affairs) and V. Gritsak (Head of ATO [Anti-Terrorism Organization]

The authenticity, reliability and source of this leaked report remains to be fully assessed. These figures have not been made public and they are not the object of media commentary. They are, however, compatible with a report published by the Central News Agency Novorossia, Novorus.info (Russian) based on figures of the rebel Donbass forces which point to major military losses by the Kiev regime.

In contrast, the Novorossia figures do not provide a breakdown of  “killed, wounded, prisoners”. According to Central News Agency Novorossia, Novorus.info (Russian):

What the MIA leaked report as well as the Novorossia figures convey is the conduct of a large scale military operation by Ukrainian Forces resulting in significant casualties incurred by Kiev government forces. None of this has been reported by the corporate media.

The leaked MIA report suggests heavy losses of military equipment by Kiev forces including a large number of tanks and armored vehicles which have either been captured or destroyed.

The rebels (according to MIA figures) have downed seven aircraft. This information was “leaked” 2 days before the MH17 crash. The reliability of these figures emanating from government sources remained to be determined.

While the reliability of these figures emanating from the government remains to be determined, they nonetheless point to the failure of the Kiev led anti-terrorism operation confirming earlier reports to the effect that government forces have been repealed in Donetsk and Lugansk.

Table and translation provided by:

Michel Chossudovsky is an award-winning author, Professor of Economics (emeritus) at the University of Ottawa, Founder and Director of the Centre for Research on Globalization (CRG), Montreal and Editor of the globalresearch.ca website. He is the author of The Globalization of Poverty and The New World Order (2003) and America’s “War on Terrorism”(2005). His most recent book is entitled Towards a World War III Scenario: The Dangers of Nuclear War (2011). He is also a contributor to the Encyclopaedia Britannica. His writings have been published in more than twenty languages. He can be reached at[email protected]