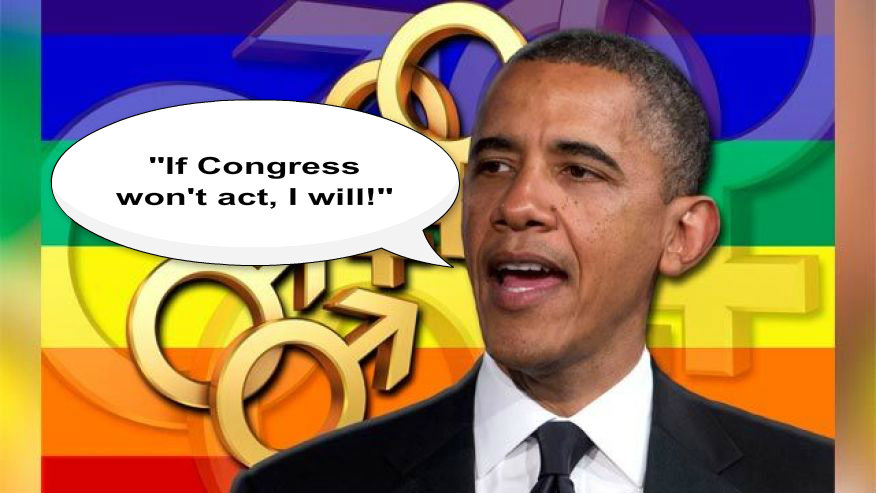 Obama will be signing an executive order forcing Christian organizations to hire homosexuals, since it will ban them from refusing to hire sodomites. Religious groups asked Obama for an exemption from such an injunction, but Obama refused them such a liberty. As we read from one report:

The order will allow some exemptions for religious groups that are federal contractors but not as much flexibility as the groups had wanted.

A religious organization would be barred from making hiring decisions based on sexual orientation or gender identity.

This means that religious organizations, on top of being forced to hiring an employee involved in a homosexual marriage, will be forced to also give benefits to that same homosexual couple. This signifies that the state will now be coercing Christians into supporting the homosexual cult of death. Professor Cathleen Kaveny of Boston College made this concern clear:

It is when a requirement is perceived as backing the church into a corner, as mandating that it approve of same-sex relations, that the conflicts will start. So a likely flash point will be a requirement to provide health benefits to same-sex married couples.

Government officials have made it clear that there will be no exemption given to religious organizations. According to the Wall Street Journal, under this executive order, “a Catholic organization could decline to hire someone for a nonreligious post because she wasn’t Catholic, but not because she was a lesbian.”

Senior officials have been quoted as saying:

You can use religion to only hire people who share your religion, but you can’t discriminate against somebody who is of your faith who happens to be LGBT, unless they fall within the ministerial exemption

This sort of reasoning is pure equivocation and deliberate confusion against Christian and eternal truths. One cannot be homosexual and be a Christian, it is an impossibility. A homosexual who says he is Christian, it not a Christian, but a liar, wolf in sheep’s clothing who comes “to steal and kill and destroy” (John 10:10)

This tyrannical measure was made by Obama after he made this equally despotic statement:

We have laws that say Americans can’t be fired on the basis of the color of their skin or their religion, or because they have a disability. But every day, millions of Americans go to work worried that they could lose their job, not because of anything they’ve done…but because of who they are… If Congress won’t act, I will.

Fourteen religious leaders, including some of Obama’s closest advisors, are demanding that an exemption be given to religious organizations.

Michael Wear, who worked in the Obama White House and on his 2012 campaign, organized a letter with numerous religious leaders combating Obama’s decision. In the letter it reads:

An executive order that does not include a religious exemption will significantly and substantively hamper the work of some religious organizations that are best equipped to serve in common purpose with the federal government. …When the capacity of religious organizations is limited, the common good suffers. … Americans have always disagreed on important issues, but our ability to live with our diversity is part of what makes this country great, and it continues to be essential even in this 21st-century,” the letter said. “Without a robust religious exemption . . . this expansion of hiring rights will come at an unreasonable cost to the common good, national unity and religious freedom.

We are deeply disappointed… An order like this will mandate that religious organizations abandon their religious freedom in order to contract with the federal government.

It is not the job of the state to protect homosexuals, but to punish them, for St. Peter writes that governments as sent by God “to punish those who do wrong and to commend those who do right.” (1 Peter 2:14)

Governors “are not a terror to good works, but to the evil” (Romans 13:3), why then is the state holding the sword of God’s justice in vain? The state is to be “the minister of God to thee for good” (Romans 13:4), not for homosexuals and sodomites.

The homosexuals do things “worthy of death,” (Romans 1:32), and how then are the rulers, who “beareth not the sword in vain” (Romans 13:4), are to be “a revenger to execute wrath upon him that doeth evil” (Romans 13:4)? Let us look no further than what God told His prophet:

If a man also lie with mankind, as he lieth with a woman, both of them have committed an abomination: they shall surely be put to death; their blood shall be upon them. (Leviticus 20:13)

This executive order is only a manifestation and a closer fulfillment to what we have been forewarning about: homosexual tyranny and its sharp and poisonous tentacles leeching themselves onto our Christian liberty. As the holy warrior David proclaims, “And I will walk at liberty: for I seek thy precepts.” (Psalm 119:45)

The precepts of God consists of the suppression of homosexuals, and thus in such a glorious act will the Christian have liberty, and not the tyranny of the heathen. For liberty is not license, but freedom to be holy. As St. Paul tells us:

Because the creature itself also shall be delivered from the bondage of corruption into the glorious liberty of the children of God. (Romans 8:21)

This glorious liberty is not inclusive to homosexuals, for they live in bondage and desire to yoke Christians into bondage. The homosexual come “in privily to spy out our liberty which we have in Christ Jesus” (Galatians 2:4), masquerading themselves as Christians in order to have the state force Christians into accepting them, and ultimately, support their wickedness.

Outlaw the sodomite before he outlaws the Christian.