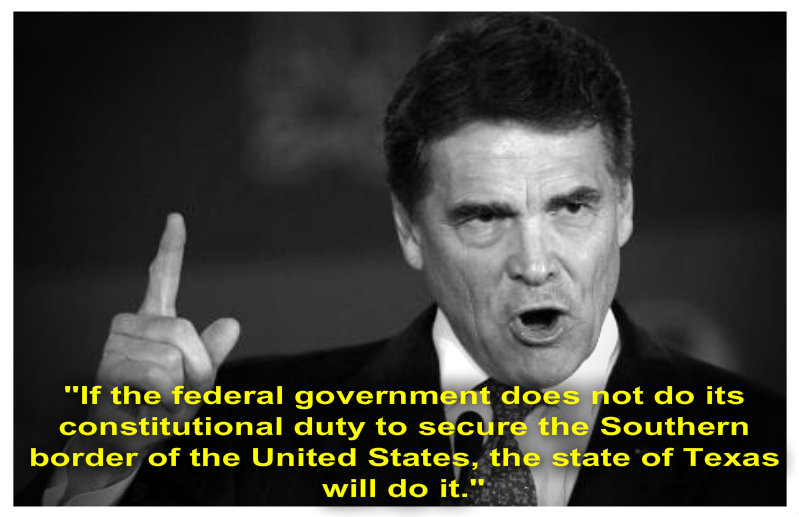 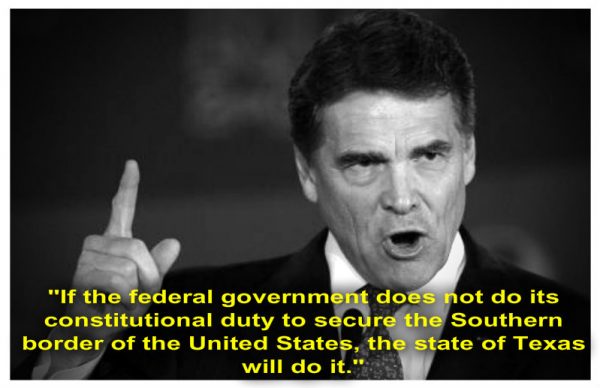 Following Rick Perry’s disgust with Barack Obama’s trivial treatment of the invasion of illegal immigrants across the US/Mexico Borders, the Texas Governor is ready to call upon 1,000 National Guard troops and deploy them to the Rio Grande Valley, according to a state official’s office memo.

Governor Perry said at a Republican barbecue in Iowa on Sunday, “If the federal government does not do its constitutional duty to secure the Southern border of the United States, the state of Texas will do it.”

State Sen. Juan “Chuy” Hinojosa, a Democrat from the Rio Grande Valley town of McAllen that has been hit hard by the flood of illegal immigrants crossing the border, confirmed the activation to the Houston Chronicle on Sunday night. Over 57,000 children from Central America have entered the country illegally so far this year.

“The senator understands that Perry wants this troop build-up but is not sure what kind of federal approval he needs for it. He just knows he wants to deploy 1,000 troops there,” Hinojosa spokeswoman Jennifer Saenz said to the Chronicle.

Hinojosa opposes the deployment of troops. “My position is that we do not need to militarize the border,” Hinojosa told the Houston paper, adding that the area has requested help for additional law enforcement and also resources to feed, clothe and provide health checkups for the large influx of juvenile migrants.

“The National Guard are not needed here… They have a different mission. They have a military mission,”the state senator said.

State officials stressed that the Guard members and DPS troopers do not amount to a militarization of the border by Texas. “The DPS and the National Guard are working to keep any drug and human trafficking south of [US Highway] 83 and with the goal of keeping any smuggling from entering major highways to transport East/West/and North,” a leaked memo from a state official’s office said, according to the McAllen Monitor.

Hinojosa also added that the move by Perry smacked of political gamesmanship. “All these politicians coming down to border, they don’t care about solving the problem, they just want to make a political point,” he said.

While some have said that deploying National Guard troops amount to the militarization of the border, the memo says otherwise.

“This is not a militarization of the border,” the memo states. “The DPS and the National Guard are working to keep any drug and human trafficking south of (U.S. Highway) 83 and with the goal of keeping any smuggling from entering major highways to transport East/West/and North.”

“Smuggling has supposedly according to DPS moved West on the border with an increase in Jim Hogg County,” the memo states. “DPS especially wants to apply the Guard in the rural areas to patrol.”

Perry’s actions drew a difference of opinion from Texans.

“The children fleeing violence in Central America are seeking out Border Patrol agents. They are not trying to evade them. Why would Rick Perry send soldiers to confront these kids?” Rep. Joaquin Castro (D-Texas) said to the Chronicle.

“Our state officials haven’t taken care of business to protect the people of Texas,” said Grassroots America Executive Director JoAnn Fleming. “This is an issue of safety and security. It’s not an issue of race. Governor Perry needs to stop asking Washington to come save us.”

Hinojosa doesn’t seem to have a problem letting the illegals cross the border either and said the National Guard wasn’t equipped to help them cross the Rio Grande.

“These are young people, just families coming across,” he said. “They’re not armed. They’re not carrying weapons.”

Well, Mr. Hinojosa, they aren’t supposed to be equipped to break the law or help lawbreakers. They are supposed to be helping to enforce the law. That is the purpose. While they may not be carrying weapons, reports are that Mexican drug cartels are providing them cover fire for the invaders and many of these illegals do pose a serious health threat to America, which is a national security issue.

Militia formed near the Texas border to curb the illegal immigrant invasion in June. This month they established a command post to help defend the border and secure national sovereignty.

It’s about time this was done. The only question is, why did it take this long to come to this action? Meanwhile, Obama still has his hand out for nearly $4 billion in taxpayer money to “fix” the border crisis that his administration orchestrated.