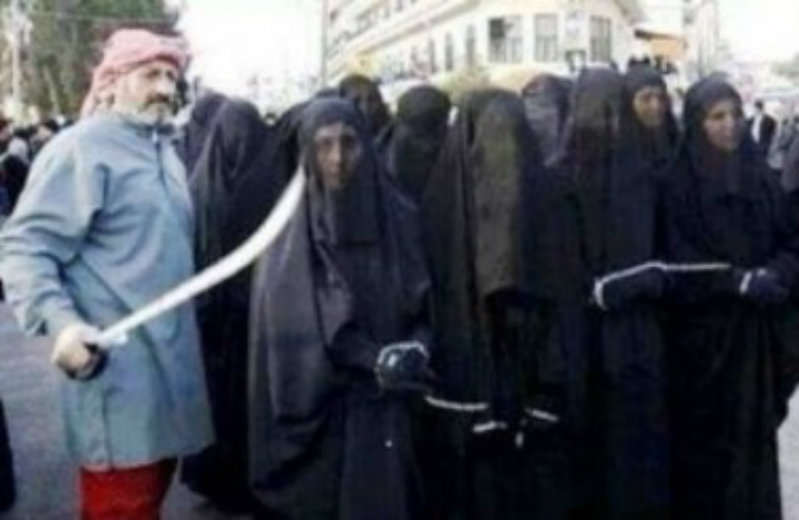 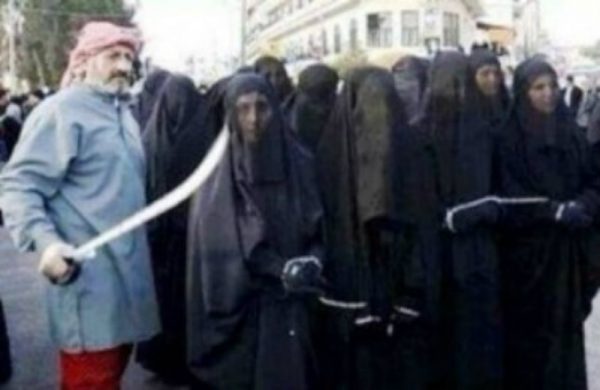 The above picture recently appeared on several Arabic social media and websites.   Its caption says: “First female slave market in Deir ez-Zur,” a Syrian region that is 20 percent Christian and is currently occupied by the Islamic State of Iraq and Syria.

Regardless of its origin or authenticity, it’s true significance is that it perfectly relays what we do know is going on in Syria — from fatwas permitting men to rape women, to fatwas calling on women to engage in the sex jihad, including against their will.

The jihadis are demanding sexual satisfaction and rewards for their sacrifices, and they are getting it.

This is a reminder of what Abu Ishaq al-Huwaini, a popular Salafi preacher in Egypt, said on Hikma TV back in 2011.  He explained that after jihadi conquests, the properties and persons of “infidel” inhabitants are to be seized as ghanima, or “spoils of war,” distributed among the Muslim jihadis or taken to “the slave market, where slave-girls and concubines are sold.”

Huwaini referred to these sex slaves by the dehumanizing appellation that the Koran gives them, ma malakat aymanukum—“what [not whom] your right hands possess”—in this context, sex-slaves: “You go to the market and buy her, and she becomes like your legal mate—though without a contract, a guardian, or any of that stuff—and this is agreed upon by the ulema. In other words, when I want a sex-slave, I go to the market and pick whichever female I desire and buy her.”

But of course this notion does not originate with Huwaini.  In Koran 4:3 Allah commands Muslim men to “Marry such women as seem good to you, two and three and four… or what your right hands possess.”  As Huwaini points out, Islam’s ulema, or “scholars,” are unanimously agreed that “what your right hands possess” is simply a sex-slave taken during a jihad raid.  Linguistic evidence further suggests that she is seen more as an animal or a possession than a human—hence their inhuman treatment, as possessions to be bought and sold (and as recently confirmed by a top ranking Egyptian Salafi).