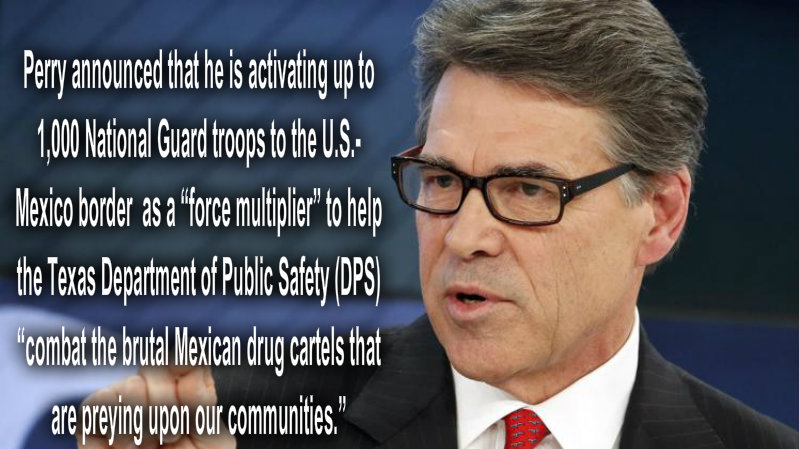 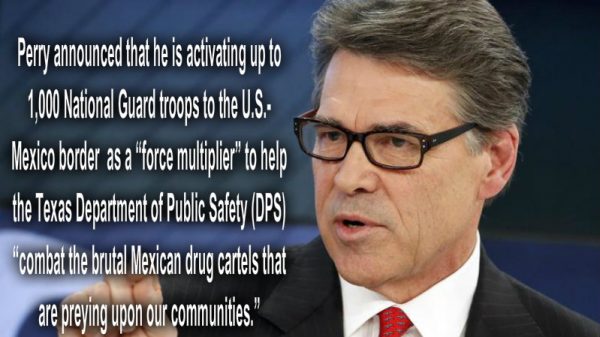 Months (actually years, since 2012) after illegal aliens began surging across the Mexico border into America’s southern states (at a rate of 35,000 a month into Texas), Governor Rick Perry is finally really doing something to stem the invasion.

Yesterday, July 21, 2014, stating that the federal government offers only “lip service” on border security, Perry announced that he is activating up to 1,000 National Guard troops to the U.S.-Mexico border  as a “force multiplier” to help the Texas Department of Public Safety (DPS) “combat the brutal Mexican drug cartels that are preying upon our communities.”

“I will not stand idly by while our citizens are under assault and little children from Central America are detained in squalor. We are too good of a country,” Perry said.

The National Guard troops could detain people if asked, Texas Adjutant General John Nichols said at the press conference with Perry, but they are planning to play a “referring and deterring” role by deterring cartels with their visible presence and referring any immigrants suspected of being illegally in the country to DPS.

Perry argued that the elevated response at the border by DPS personnel has already acted as a deterrent force and reduced apprehensions. That operation comes at a cost of $1.3 million per week. A state memo obtained by the McAllen Monitor, which first reported Perry’s plan to deploy the National Guard, indicates the new efforts will cost the state of Texas $12 million per month.

Perry said he expects the federal government to eventually reimburse the state of Texas for the costs it has incurred protecting the southern border.

CBS reports that White House Press Secretary Josh Earnest said prior to Perry’s announcement that the Obama administration has not yet received the formal request from Perry to activate the troops, but he downplayed it as a merely a symbolic measure, “What we’re hopeful is that Governor Perry will not just take these kinds of steps that are generating the kind of headlines I suspect he intended, but will actually take the kinds of steps that will be constructive to solving the problem over the long term.”

Referring to the $3.7 billion in emergency appropriations the POS has requested from Congress, Earnest said, “To be specific that means that we hope that Governor Perry will support the supplemental appropriations request that this administration put forward a few weeks ago and that that Governor Perry will use his influence with congressional Republicans in Congress an urge them to stop blocking comprehensive bipartisan legislation in the House of Representatives.”

To Joshua Earnest, the new Mouth of Sauron:

The United States Constitution recognizes America’s state National Guards or militias, and gives them vital roles to fill: “to execute the Laws of the Union, suppress Insurrections and repel Invasion.” (Article I, Section 8, Clause 15).

State governors have the full authority to activate state National Guards, without having to issue a “formal request” to Washington, D.C.

In the end, however, Perry’s deployment of 1,000 Texan National Guard troops to the border is merely a symbolic act that will be entirely ineffectual in stemming the Invasion of the Illegals.