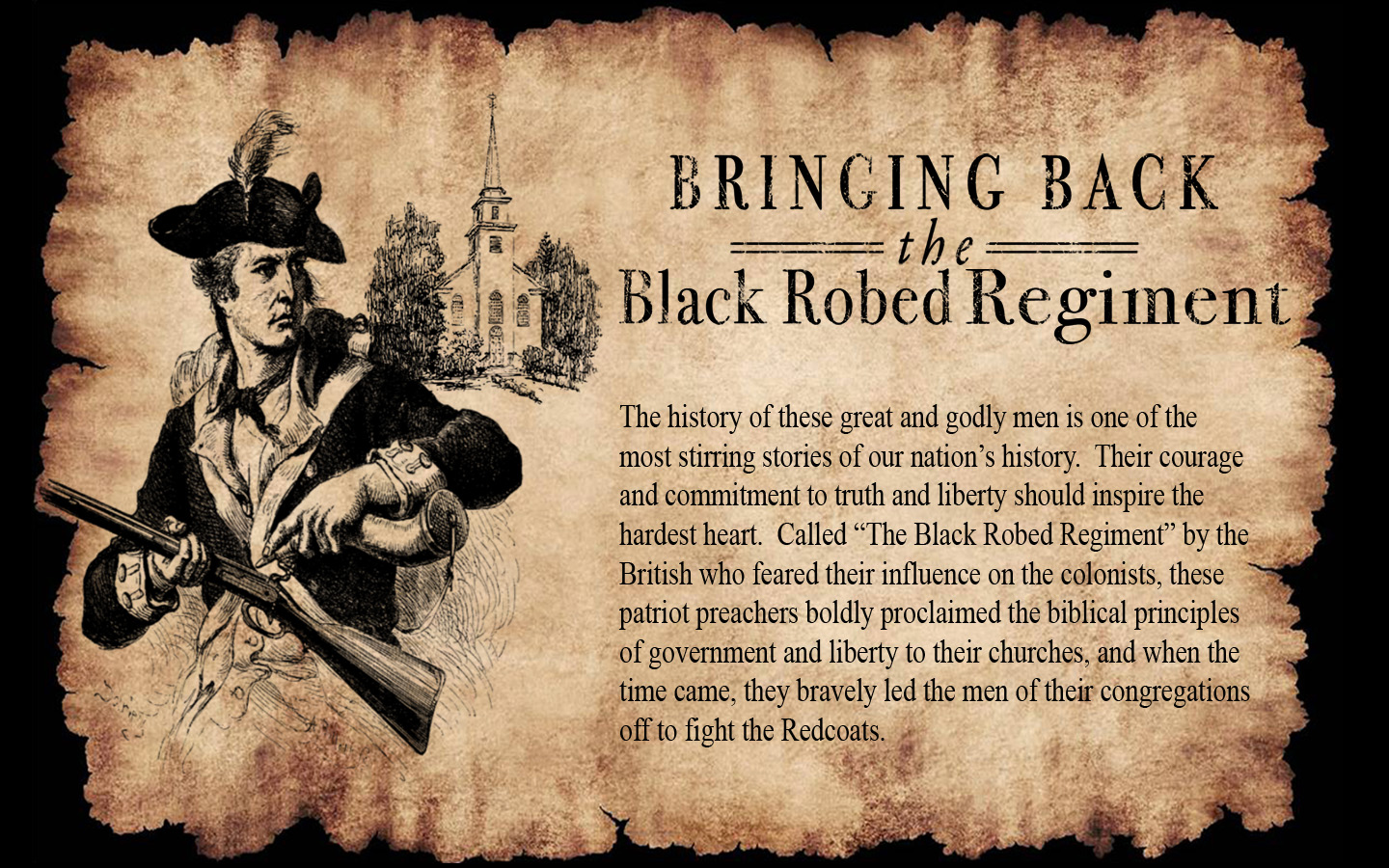 Pastor and state Representative Dan Fisher(R-OK) has rescued a crucial part of our history from near oblivion – namely, the role that many pastors played in our War for Independence. In his book, Bringing Back the Black Robed Regiment (2013), Fisher examines the “patriot preachers” of the 18th Century, who led their congregations to battle the abusive tyranny of the Redcoats.

I was familiar with the Shenandoah Valley (Virginia) Pastor Peter Muhlenberg because I have a reproduction of him on my office wall. It’s the famous scene where he removed his clerical gown, revealing his Colonel’s uniform of the Continental Army.

A Bible in one hand, a musket in the other

Having said that, he cast his clerical gown aside, strode down the aisle of the church, and recruited the men of his congregation. Together, they went off to fight with Washington, right through to the final battle of Yorktown years later.

Indeed, Muhlenberg was Washington’s spiritual confidant throughout the war. During a particularly perilous time in Virginia, Washington dispatched Muhlenberg to buck up the flagging spirits of the thinning ranks of the war-weary troops. The mission was accomplished.

What came as news to me was the large number of pastors who went off with their men to war. A number of times the men would tell their pastor, we’ll go if you lead us.

The “Shot hear round the world” came from the pulpit

The Founding Fathers explicitly believed that politics and religion had to be mixed. How fitting that the “shot heard round the world” was fired in front of Jonas Clark’s church on the Lexington green. During the battle, men went back and forth from the church to get ammo, because that’s where their powder and ball were stored.

A nineteenth-century historian, John Adams, said that freedom was not born a bastard. Freedom was birthed when church and state were still married.

A British writer, Horace Walpole, said at the time, “America has run off with a Presbyterian pastor.”

Pastor Jonas Clark and Deacon John Parker (who was captain of the Lexington militia) trained the men after the Sunday service every week in New England to camp out around the Lexington church, even as men and women came from all over the U.S. to spend a week or more at a time to protect Bundy from another potential attack by the Bureau of Land Management.

Rep. Fisher argues that, to the extent that politics today are dirty, it is because Christians have too often removed themselves from participation. He adds that preachers should teach about the biblical principles of liberty and government – indeed about all of life – so their congregants will have a template to use with politicians.

Failure to do so today, he says, has resulted in many Christians voting wrong.

As an interesting note, he mentions President James Garfield, who began his working life pastoring in church. When the War between the States commenced, he entered the ranks of the Northern Army as a General and stayed until the end.

But serving in the military was not his final calling, as he also served in Congress for almost 20 years. As a representative in 1877, Garfield wrote an article for Atlantic Monthly where he emphasized the need for Christians to participate in politics:

Now, more than ever the people are responsible for the character of their Congress. If that body be ignorant, reckless, and corrupt, it is because the people tolerate ignorance, recklessness, and corruption. [And] if the next centennial does not find us a great nation… it will be because those who represent the enterprise, the culture, and the morality of the nation do not aid in controlling the political forces.

A good warning from the Congressman who would later become our 20th President – an encouragement to which Dan Fisher responds: “Bring back the Black Robed Regiment!”

Larry Pratt has been Executive Director of Gun Owners of America for 27 years. GOA is a national membership organization of 300,000 Americans dedicated to promoting their second amendment freedom to keep and bear arms. He published a book, Armed People Victorious, in 1990 and was editor of a book, Safeguarding Liberty: The Constitution & Militias, 1995. His latest book, On the Firing Line: Essays in the Defense of Liberty was published in 2001. Pratt has held elective office in the state legislature of Virginia, serving in the House of Delegates. Pratt directs a number of other public interest organizations and serves as the Vice-Chairman of the American Institute for Cancer Research. Assisting Larry Pratt in the operations of GOA is his son Erich Pratt, who is communications director of GOA. Both Larry and Erich are available to conduct interviews on the topics of 2nd Amendment Rights, self defense and the Biblical position on firearm ownership.