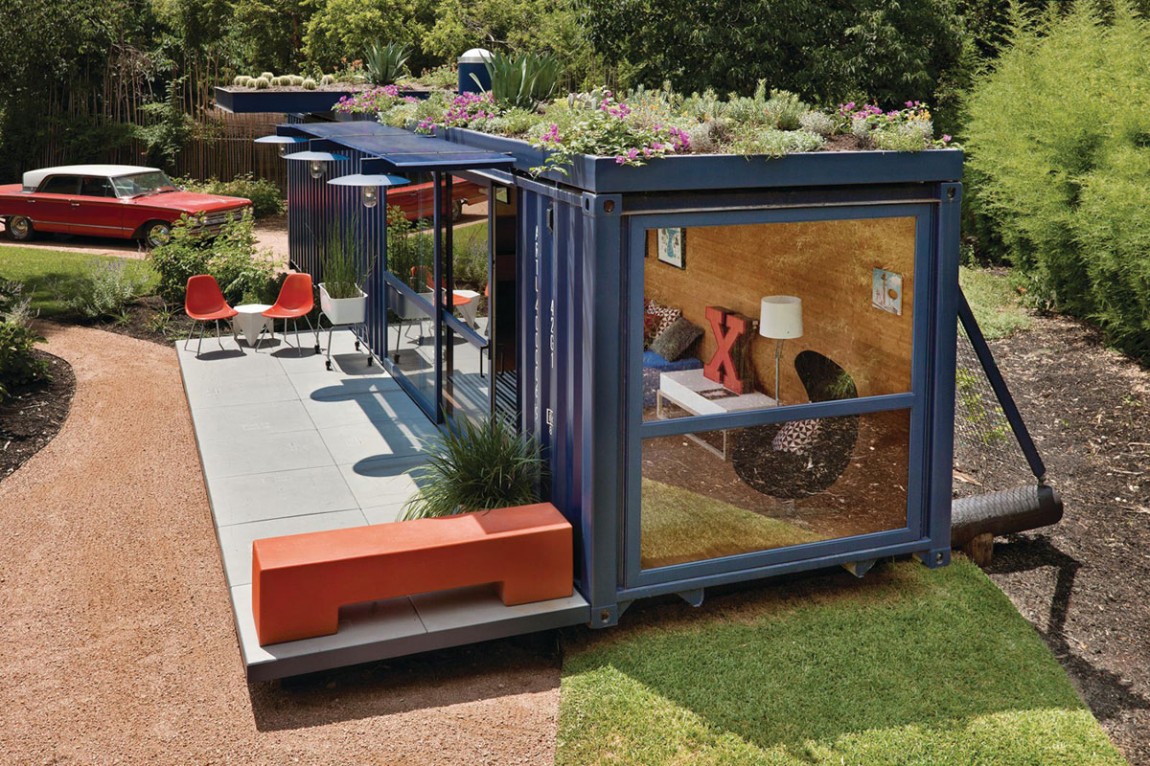 While the world is sizzling and percolating in conflicts and wars, and U.S. is roiling in manufactured crisis after crisis, real or imagined emergencies, overwhelmed by the constant invasion of illegal immigrants, The Washington Post writes on the front page, “Thinking inside the box on D.C. housing costs,” living in repurposed dinged freight shipping containers. Two days before, Deborah K. Dietsch featured “Thinking big in a small way.” (Michael Laris, July 21, 2014)

It is understandable how a damaged shipping container may be an appealing substitute for shelter to a broke student, a homeless person, or a third world shanty-town dweller, but Americans have plenty of housing space and resources to shelter its citizens.

We are so well-off that we even house generously people who break our laws every day when crossing our no-longer-enforced border. Why force Americans into tight and ridiculous spaces when we have so much land? Environmentalists are afraid that we are destroying the planet with our very existence. If they crowd all humanity into as tight and dense urban areas as possible, animals can roam free and land can be rewilded and reclaimed for the creatures we displaced with our civilization, roads, and undeserved mobility.

These tiny spaces are expensive but they give the occupants a false sense of saving money and the planet by not using a car, walking or biking everywhere, just like the zoning environmentalists have been pushing for a while now, high density, and high rise living, five minutes from work, school, shopping, and play while the metro is nearby. Absolute heaven if you want to live like a rat in an 8-by-40-foot box! Who would not enjoy living in “lovingly repurposed steel husks” that have been previously “sloshing across oceans on mammoth container ships?”

A demolished student house will be the location in D.C. of 18 shipping containers to make “eye catching” rentals. Citing Ayn Rand‘s novel, “The Fountainhead,” the owners are compared to the rebellious architect in the novel who fights against “evil” conformists.

After container doors are replaced by windows and mirrored wardrobe in each container/bedroom, the residents no longer feel confined and claustrophobic. Cut steel panels will make room for the kitchen and living room when the containers are joined. The containers cost $2,000 but the rent price is not divulged. The project is slated to be completed by August.

The builder’s dream to “float hundreds of sea container apartments on a barge in the Potomac and creating a homeless village on the river to serve Georgetown.” The zoning officials are skeptical, they must see if “code will allow them.” But zoning codes can be changed to accommodate environmentalist agenda.

Renting micro-dwellings in the 144-unit building called Harper for $2,500 a month for a one-bedroom, 400 square foot apartment and a parking space enticed many. Because it is so small, residents would want to go out, to get rid of claustrophobia. “This location couldn’t be more perfect for the socializing lifestyle,” says Leah Wald. Renting the average 375 square foot hotel room by the day can cost you about the same and the maid is free.

The nine-story, 218-unit called the Drake, will open in September. Lots of glass and amenities such as oak floors, stainless steel kitchens, and Bosch appliances are supposed to compensate for the lack of space.

The Wharf apartments which are slated to open in 2017 will have 501 micro-units, 171 will be 325-354 sq. ft., highlighting a Murphy bed, with a “built-in shelf for storage when the bed is stored vertically against the wall.” The kitchen on wheels can be used as a table or as a desk. “The units are designed like the inside of a boat.” It seems perfect for anybody who hates cleaning and does not mind living in a glamorized jail cell.

The 200 square ft. aPodments in Sammamish, Washington rent for $600-900 per month. There are no elevators and no parking spaces. Resident Judi Green, who rents a 10 by 10 ft. loft cubicle, must climb six flights of stairs, and “shares the kitchen with seven other tenants on the second floor.” The micro-housing units increase the population density of the area greatly.

In countries like Japan, where land is very scarce and expensive, tiny dwellings are popular. It is not the case in the United States where land is plentiful. Unfortunately, millions of acres of our land have been locked to human habitation and set aside for conservation.

Alley pods are placed between townhouses and in suburbs micro-residential units are built between single family homes, destroying their property values. These people have worked their entire lives to buy a single family home.

The Department of Housing and Urban Development (HUD) will dismantle local zoning and force people to move into certain areas in order to achieve what they consider “racial, economic, and ethnic diversity.” Multiple illegal immigrant families purchase or rent one single home creating a third world nightmare for the single family neighbors who must live next door.

“Nationalizing neighborhoods” on a grand scale is done for “our own good and to achieve utopia.” By obliterating zoning regulations, we will have neighborhoods by government fiat quota. (Rush Limbaugh monologue, September 12, 2013)

Rush Limbaugh pointed out that “HUD’s power grab is based on the mistaken belief that zoning and discrimination are the same, zoning is disguised discrimination.” Introducing 200 square ft. pods between single family homes is “social justice.”

The progressives’ social engineering projects implemented around the world are not aimed at just destroying national sovereignty, language, and cultural identity. They are now engaged in a massive replacement of rural areas and “suburban sprawl” with high density, high rise urban dwellings in the name of green environmentalism, saving the planet from the destruction of manufactured man-made global warming/climate change.

Ileana Johnson is a senior columnist for Canada Free Press, retired teacher with 30 years experience, best selling author of UN Agenda 21: Environmental Piracy at Amazon, author of Echoes of Communism, Liberty on Life Support, and the upcoming book Communism 2.0 Twenty-Five Years Later. She is also a radio commentator on Liberty Express Radio on Butler on Business, every Wednesday at 10:34 EST. “I travel and speak on issues of interest to me, communism, education, economy, immigration, and UN Agenda 21.” She has a doctorate in Economics and speaks five other languages. She is a legal immigrant and proud American citizen by choice.