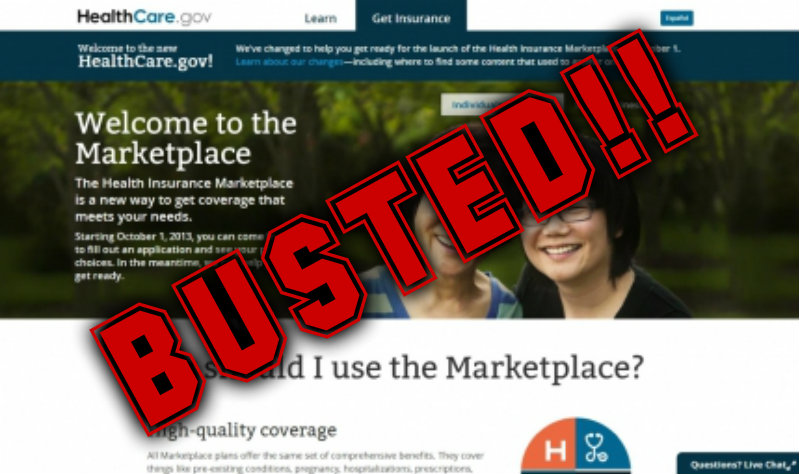 Demonstrating more lawlessness by the Obama administration, the Government Accountability Office has issued a report in which it claims that it undertook a sting operation to see whether or not the Affordable Care Act’s eligibility verification system actually works or not. Their conclusion was that the majority of fake insurance applications submitted were approved.

According to testimony by Seto Bagdoyan, who directs GAO’s Forensic Audits and Investigative Service, “The federal marketplace approved coverage for 11 of our 12 fictitious applicants who initially applied online, or by telephone.”

The nonpartisan Government Accountability Office says its undercover investigators were able to get subsidized health care under fake names in 11 out of 18 attempts. The GAO is still paying premiums for the policies, even as the Obama administration attempts to verify phony documentation.

The agency’s findings are contained in testimony to be delivered at a House Ways and Means Committee hearing Wednesday. An advance copy was provided to The Associated Press.

Seto Bagdoyan, head of GAO audits and investigations, will also testify that there’s still a huge backlog of applications with data discrepancies, even though the administration has resolved some 600,000 cases.

The GAO tests revealed potential weaknesses in the nation’s newest social program. However, in the real world, it may be difficult for fraudsters to profit since government subsidies are paid directly to insurance companies.

Of course, Americans will be relieved to know that six applications were blocked, according to the Obama administration, due to eligibility checks, which are a part of HealthCare.gov. That still leaves twelve that weren’t blocked by that system. Keep in mind this is the same system that wasn’t ready for Obamacare implementation three years after the unconstitutional law was signed by Obama and the job was given to a college friend of Michelle Obama…. And the company that produced the website has been linked to the creation of the Benghazi video.

The Washington Post also informs us that the GAO investigation was requested prior to the Healthcare.gov website going live last Fall. That request was made by House Ways and Means Chairman Dave Camp (R-Mich.); Rep. Charles W. Boustany Jr. (R-La.), chairman of the Ways and Means oversight subcommittee; and Sens. Tom Coburn (R-Okla.) and Orrin G. Hatch (R-Utah).

House Republicans were eager for early information because the findings reinforce their contention that the Obama administration set up the health insurance marketplace in ways that leave it vulnerable to fraud and waste of taxpayer money. The allegation that HealthCare.gov does not properly verify the identity and eligibility of consumers has been one of several lines of attack that congressional Republicans have used in trying to discredit the 2010 Affordable Care Act and the way administration officials set it in motion.

Even before the GAO delivered the early findings, the lawmakers were seizing them as fresh ammunition. “We are seeing a trend with Obamacare information systems: under every rock, there is incompetence, waste and the potential for fraud,” Camp said in a statement. “Now, we learn that in many cases, the exchange is unable to screen out fake identities or documents.”

The GAO’s account of fictitious applicants obtaining subsidized coverage goes beyond a related problem that surfaced this spring and that the investigators also cited: The government may be paying incorrect insurance subsidies to a significant share of the 5.4 million Americans who signed up for health plans for this year through the federal marketplace.

The GAO testimony contains updates on that problem, saying that, as of mid-July, about 2.6 million “inconsistencies” existed among applicants who had chosen a health plan and that 650,000 of them had been resolved.

The investigation is ongoing and the GAO has said that they “can’t draw any conclusions” until the complete the investigation. Bagdoyan said the “intent of this sample was not to project in any way.” Instead, it was the GAO’s intention to focus on things that need to be worked on in the future.

However, if that is the case, then why not wait until you complete your investigation and then reveal your findings? Two-thirds of fake applications getting through is not something that just needs future work, but reveals a fatal flaw in the system.

Of course, the socialists have declared that there is nothing to see here.

“It’s much ado about nothing, because there’s really nothing there yet,” Rep. Joseph Crowley (D-N.Y.) said. “What is the ultimate prize for the criminal? Is it a free colonoscopy?”

Well, Rep. Crowley, if you are one of those sodomites who enjoys that kind of thing, yes. However, there is more to this issue that a colonoscopy. There is the fleecing of taxpayers for subsidies for health insurance for other Americans. Let’s call it what it is: Theft, pure and simple, in a socialized medicine system. And, by the way, he referred to those who would engage in this as “criminals.”

Keep in mind that Obamacare suffered both a devastating blow on Obamacare subsides from a federal appeals court on Tuesday and the same day a rebuttal of that decision by a Virginia federal appeals court. This means that more than likely, Obamacare will be back in front of the Supreme Court again soon. The question now is, will they do the right thing and declare the entire monstrous fiasco, masquerading as a lawful law, to be unconstitutional and spare the American people the tyranny of an overreaching and corrupt federal government? My guess is that they will not do so.