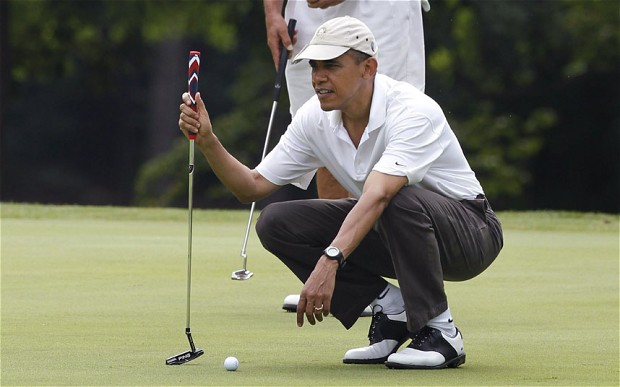 Obama has “checked out”. Or rather, his administration and the folks that run his show have.

The president’s completely ridiculous, inappropriate behavior after the MH17 plane was shot down should’ve tipped even the casual viewer that something is a tad amiss here in good ‘ol U.S.A.

That day, reports that an official in the Ukrainian government had announced that 23 Americans were killed in the crash flooded the media. They were unsubstantiated reports later found to be incorrect, but they happened nonetheless.

Every outlet from Reuters on down ran with that information. Countless journalists Tweeted about it. In a late night moment of amazement at Obama’s response to this news, I made this video:

The day after MH17 happened, I wrote, “Want more proof we’re living in The Matrix, America? Check out our president. The guy can’t even muster up the effort to PRETEND anymore.”

It started when he spoke for only about 40 seconds on the matter, saying, “And it looks like it may be a terrible tragedy.” Most people would agree that 300 people who were just minding their own business riding a plane from one country to another being murdered is spot on for the definition of “terrible tragedy”. He went from that right into jokes. As Red State reported, “In fact, it was so lacking in taste that even Piers Morgan noticed it was lacking in taste,” posting Morgan’s Tweet about the jarring transition from “may be a tragedy” to cracking lame jokes in literally no time.

Then the president (or rather, his handlers) didn’t even bother to reschedule his completely unrelated burger photo op.

Not just a burger. Not that Obama wasn’t hungry because that’s normal, so he went to grab a bite to eat.

No — a burger photo op. A burger photo op he went to despite how, at the very least, tacky that is and looks not only to the citizens of America but to the rest of the world and despite the fact that when he was in Texas after the border crisis hit the news, he refused to actually go to the border himself because he claimed he wasn’t interested in photo ops.

And that’s not all; the day the mainstream media was reporting 23 Americans perished among the 300 dead on flight MH17, Obama followed up his non-related burger photo op — just as he did when our Ambassador in Libya and three other Americans were killed by terrorists — with yet another fundraiser.

He already won reelection, by the way. What is he raising all those funds for? Doesn’t he have anything better to do, you know, as president?

Well, a little over a week later, and The London Telegraph apparently agrees Obama is a bit absent as far as presidents go with it’s new article, “Barack Obama has already checked out of his job,” subhead, “The degree to which Barack Obama is now phoning it in – sleepwalking perfunctorily through his second term, amid golf rounds and dinner parties – is astonishing.”

And based on his recent handling of situations much more serious than a possible post-presidential move to sunny California, it seems as if “No Drama Obama” is no longer even worried about keeping up appearances; he doesn’t care enough to fake it.

Consider this: In recent days, a) Malaysia Airlines Flight 17 was shot down, apparently by Russian separatists in Ukraine, b) In the Gaza strip, the numbers killed continued to mount as Israelis and Palestinians exchange rocket fire, c) a huge influx of children fleeing Central American poverty and gang warfare swamped America’s southern border, creating a humanitarian crisis. And, oh yeah, d) Christians living in Mosul were given the choice to either convert to Islam or flee the area they have inhabited for nearly two thousand years.

You know what else has happened during this time? a) Obama played many rounds of golf, b) he attended numerous fund-raisers, c) he dined on barbecue in Texas and burgers in Delaware, and d) he almost appeared on the comedian Jimmy Kimmel’s late-night television show in Hollywood.

…and finished up with:

If Nero fiddled while Rome burned, then Obama is dining out, golfing, and raising money while the world collapses.

Most of us get it by now — the handlers pick and choose what tragedies the president (and that goes for any president we’ve had for decades now) is going to get visibly upset about and spend time and energy on if it will serve a particular agenda to be milked for all it is politically worth…but geez.

It’s just become so glaringly obvious at this point that Obama is gone, that even mainstream outlets can’t muster up the energy to pretend he’s still here anymore.